Samsung to double dividends next year

Samsung to double dividends next year 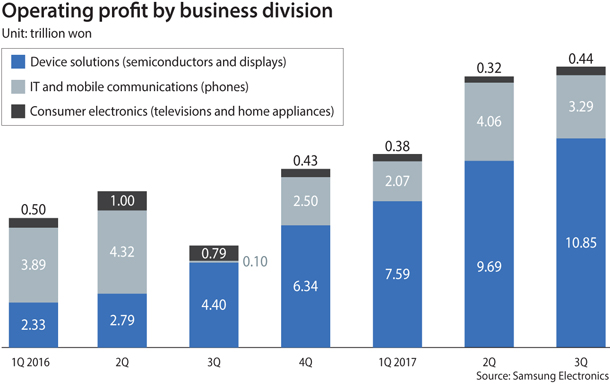 Samsung Electronics on Tuesday promised to double returns for its shareholders next year as the company’s semiconductor division continues to post record profit and its share price on the Korean stock market soars.

The company said it would increase dividends this year by 20 percent, and then double the amount next year. The dividend level will be maintained through 2019 and 2020.

This will mean roughly 29 trillion won ($26 billion) in returns from 2018 to 2020, according to Samsung. This year alone, roughly 4.8 trillion won is expected to be paid out in dividends, up from 4 trillion won last year.

“As the share price of Samsung has more than doubled since the beginning of 2016, we figured it would be most effective to focus on enhancing dividends to improve shareholder value,” Samsung said in a statement.

Another significant change to the company’s dividend policy is that future investment in mergers and acquisitions will not be deducted from free cash flow.

Free cash flow refers to the money that a company has after spending on capital expenditures like maintaining buildings, factories and equipment. Since a set portion of free cash flow is allocated to shareholders, the policy change means there will be more capital available to return to shareholders even after massive M&As.

Samsung has set 50 percent as the minimum portion of free cash flow for shareholders in the next three years. The company expects the change to increase transparency for shareholders.

Samsung announced the changes on the same day it posted record-high profit in the third quarter of this year, thanks to healthy demand for semiconductors.

Operating profit was 14.53 trillion won from revenue of 62.05 trillion won. The figures were consistent with a forecast released earlier this month that showed the company’s chip business had evidently become its main cash cow.

“As businesses that require high-capacity memory chips such as cloud and artificial intelligence services continue to expand rapidly, prices of premium chips are soaring high,” said Song Yong-ho, a professor of electronic engineering at Hanyang University.

Most of the memory investment will go toward expanding production capacity of Samsung’s V-NAND flash memory chips at its factory in Pyeongtaek, Gyeonggi, and improving DRAM chips.

While the chip business is flying high, Samsung’s other divisions are not doing nearly as well.

The consumer electronics business, which includes televisions and home appliances, had an operating margin of just 4 percent, less than the nearly 10 percent at rival LG Electronics. The division at Samsung earned 11.13 trillion won in revenue and 440 billion won in operating profit.

The IT and mobile communications division, which is in charge of making smartphones, posted 27.69 trillion won revenue and 3.29 trillion won operating profit.

“Smartphone shipments increased on the back of a global rollout of the Galaxy Note8 and solid performance of the new Galaxy J,” the company said in a statement. “However, overall revenue and earnings decreased quarter on quarter due to the higher sales portion of mid-to-low-tier models.”

As competition in the smartphone market grows fiercer with the entry of low-priced Chinese models, high marketing and materials costs are expected to be a major burden for phone makers in the upcoming quarters, according to industry analysts.

With the favorable third-quarter earnings and promising shareholder returns, Samsung Electronics’ stock price rose 1.92 percent to 2,754,000 won on the Kospi on Tuesday.