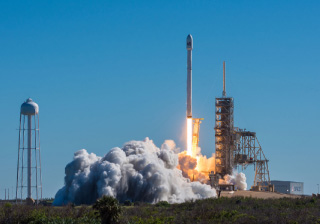 On Oct. 31, a privately-funded SpaceX rocket was launched from Florida’s Kennedy Space Center. The Ministry of Science and ICT issued a press release that the Mugunghwa-5A Satellite was successfully launched.

There were some people who watched the news with heavy hearts. They were the scientists at the Korea Aerospace Research Institute (KARI) in Daejeon. A phrase in the press release suggested how they felt. “The satellite was made by French aerospace manufacturer Thales Alenia Space and was launched by U.S. commercial launcher SpaceX,” it said.

Not just the scientists at KARI but also readers of the news report lamented the U.S. launch of the satellite made in France.

Does it mean Korea doesn’t have the capabilities to make a communication satellite to orbit 36,000 kilometers (22,369 miles) from earth? KT Corporation, which undertakes the Mugunghwa satellite project, is not counting on Korea’s satellite communication and broadcasting technologies. However, a source at KARI claims that the technology to manufacture a communications satellite is already complete.

The communications satellite Chollian-1 jointly manufactured and launched with France in July 2009 was made by the Electronics and Telecommunications Research Institute. Chollian-2 is to be launched in 2020 and will be made with fully indigenous technologies.

Some scientists feel bitter not just because of the satellite. Democratic Party lawmaker Park Hong-keun rightly pointed out that the previous administration exploited the lunar exploration project, calling it typical malpractice in research and science.

The Park Geun-hye administration claimed that it would send a lunar module in 2020 and hoist the Taegeukgi, or the Korean flag. She proposed a hasty timeline five years earlier than the original plan made by the Roh Moo-hyun administration. Scientists were perplexed at the senseless promise.

The Ministry of Science is reviewing the space program made in the Park administration. At the Aerospace Committee on Nov. 12, mid- and long-term space programs will be revised and finalized. The aerospace subcommittee is busy discussing the timeline. The goal of landing on the moon is likely to be postponed to 2030 — not 2020 or 2025.

The Park administration’s lunar exploration is condemned as a case of longstanding evil. The temptation to play power and influence is sweet. The Moon Jae-in administration pledged to correct the past ills of the government. It must shun political rhetoric to influence the space program.