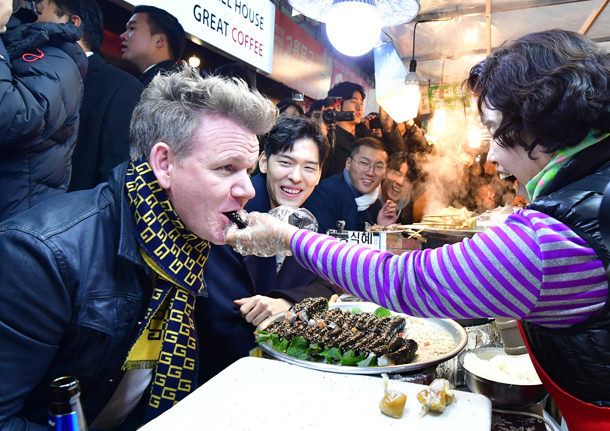 The three-star Michelin chef said he doesn’t think Europeans understands the spiciness of Korean food and the importance of washing down the food with beer, during a press conference held Saturday.

He added that beer doesn’t need to be over-sophisticated or cost a fortune, especially during a recession.

“Cass by far is the freshest and coolest - in these difficult times of the economy - a beer that we can easily buy and have fun with,” Ramsay said.

Ever since Ramsay was designated a brand ambassador for Cass, a beer that is known for industrial blandness, social media has questioned his sincerity in praising the brew.

Ramsay runs many high-end restaurants and has 16 Michelin stars. Restaurant Gordon Ramsay in London has held onto three of the coveted stars since 2001.

In Seoul, Ramsay credited his difficult upbringing for his appreciation of Cass.

“I am not an elite myself. I had a difficult upbringing, having to move 15 times during my childhood,” Ramsay said.

“I picked Cass because it is an easy drink that you can enjoy with your friends,” he added.

His understanding of Cass’ flavor and its suitability for Korean food came from an affection toward Korean cuisine that started 15 years ago.

Ramsay said he has visited countless Korean restaurants in Korean sections of London and Los Angeles, many of which served Cass.

When asked if he is aware of the mockery of Cass by British journalist Daniel Tudor several years ago - he wrote that South Korean beer was worse than North Korea’s - Ramsay said he “wouldn’t worry much about what the British journalist said,” because he himself had gone through severe criticism throughout his career from food critics.

If he paid them much heed, he wouldn’t be where he is today, he said.