When to talk to Kim

When to talk to Kim 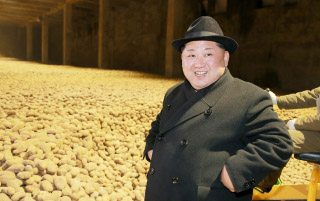 North Korean leader Kim Jong-un smiles while inspecting a potato powder factory in Samjiyon County near Mount Paektu in Ryanggang province on Wednesday, a week after the launch of its most advanced ballistic missile, in this photo released by the Korean Central News Agency. [YONHAP]

Rather than high-intensity provocations like a “hydrogen bomb test over the Pacific” or “missile launch to the vicinity of Guam,” he chose a technological provocation to show the ICBM’s extended range and hastily declared the completion of nuclear armament to send a signal to the United States for talks.

This suggests sanctions have begun to suppress the North Korean economy, and at the same time, he is worried that high-intensity provocations could trigger military attacks by the United States.

When the opportunity for negotiation comes, we need to open the path to denuclearization and prevent a war. But if negotiations begin at this juncture, a rupture is more likely than success.

But there is no possibility that Uncle Sam will accept the terms. The mainstream opinion in Washington seems to be swapping denuclearization for diplomatic ties with Pyongyang.

Talks with North Korea are necessary, but rash negotiation is undesirable. It is not only unlikely to succeed, but will also lead to serious consequences. China could use the opportunity to ease sanctions, and if negotiations break down, it could give up sanctions entirely and blame the United States.

President Donald Trump would be left with two options. One is to leave North Korea’s weapons untouched as long as they are not exported, and the other is to use a military option.

If the United States chooses the former, North Korea will end up gaining nothing from its weapons development and therefore continue provocations. American public opinion will worsen, making military options the final choice for the United States.

Negotiations with North Korea should not start too late. Economic sanctions are not enough to force North Korea to surrender. As the North’s food production has increased to 5 million tons from 3.5 million tons in 1997, the economy will not suffer as much as at the time of the Arduous March.

Moreover, as sanctions drag on, the intensity of China’s sanctions will weaken, and North Korea will find ways to get around sanctions. If North Korea acquires second-strike capability, we cannot rule out the possibility that Washington will accept Pyongyang’s demands.

Negotiations with North Korea can bring desirable results when they happen at the right time. North Korea’s economy will eventually collapse if it continues with nuclear development. The UN Security Council must stop China’s oil supply to North Korea. If China maintains opposition and reduces its oil supply instead of stopping it, Beijing and Moscow should be pressured to accept the measure of sending back North Korean workers.

So when would be the best time for negotiations? The first is when North Korean minerals are hardly exported for more than a month. When mineral exports are blocked, economic growth is estimated to fall by more than 2.5 percent. According to the Bank of Korea, it would be the lowest growth since 1998, and the regime will run out of cash.

The second right time is when the size of North Korea’s market decreases by half. The market is the lifeline for not only residents but also officials who rely on bribes. The decline of income would lead to discontent toward the Kim Jong-un regime. It is necessary to spread the information to North Koreans that the cause of economic suffering is Kim’s weapons program.

The third right time is when the state plunders foreign currency reserves in the private sector to make up for its shortage of hard currency. This will result in discord between the Kim regime and residents. If the North Korean government sells state assets to the private sector to earn foreign currency, it will be a positive sign accelerating economic transition in the North.

Seoul should give up its wishful thinking that all will work out well in negotiations. A breakdown could open the door to war. We need to be calm and composed to protect our peace and liberty.