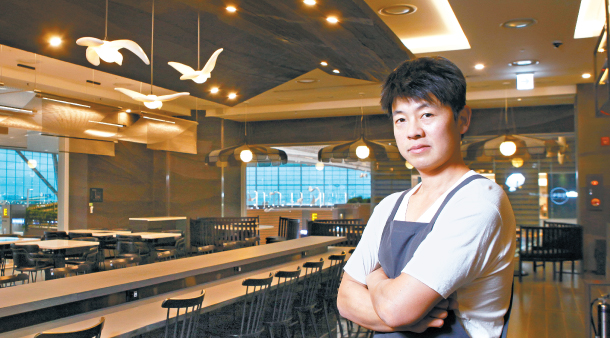 There is now one more reason for travelers making a transfer at Incheon International Airport to go through customs and step on Korean soil while they wait for their next flight. Chef Yim Jung-sik of two Michelin-starred restaurants named Jungsik in Seoul and New York is opening a new restaurant in the airport’s new Terminal 2. The eatery doesn’t require diners to be dressed formally or to know where to place their utensils when they are finished with a course. At Yim’s new restaurant Pyunghwaok, the chef serves more common, everyday Korean food, such as beef soup with rice, dumplings or braised pork and kimchi.

Although much attention has been given to modern-style Korean food at finer restaurants in Seoul, most recently by the local edition of the Michelin Guide, Yim thinks the power of Korean cuisine comes from something more casual. Just as the combination of fried chicken and beer has become a must-have for many visitors when in Korea, the chef has sensed that global audiences are more drawn to classic Korean dishes than to the modernized version, which is often seen as something fancy.

“Korean food is still on the rise, and that’s happening thanks to simple things people have easy access to, instead of the so-called modern Korean food that is served at [fine-dining style] restaurants,” said Yim in an interview with the Korea JoongAng Daily, adding that there are many people overseas who simply recruit Korean chefs to create recipes for Korean-style fried or marinated chicken to open new restaurants.

To start a new trend as he did nine years ago with the opening of Jungsik, a fine restaurant that serves Western style Korean, chef Yim has dived into discovering the core of classic Korean cuisine. It’s something the chef has yearned to do throughout his nearly 10 years of running upscale restaurants in the culinary capitals of Korea and the United States.

Left: A table set on a floor allows diners to experience a scene often seen at Korean barbecue restaurants. Center: Spicy gomtang (beef soup) is served in dishware, below, custom made for Pyunghwaok. Right: Doves made with clay hang from the ceiling to match the restaurant’s theme of peace, as Pyunghwaok means “Peace House. [PARK SANG-MOON]

Early last year, Yim decided that he wanted to pursue his passion for making classic Korean food, and followed through by holding around 20 pop-up events around Seoul where he cooked rice, boiled meat to make soup, and experimented with different types of kimchi to serve diners. While learning skills to make a different style of Korean food, an opportunity came his way to open a restaurant at Incheon International Airport’s new Terminal 2, which opens this Thursday. Pyunghwaok, which directly translates to “peace house,” serves dishes known to have originated from regions of the peninsula that are now part of North Korea, such as eobokjaengban, a large bowl of vegetables and different parts of beef, or Pyeongyang style naengmyeon (cold noodles) alongside more commonly known Korean food such as dumplings, pajeon (scallion pancake), fried chicken, bulgogi, and rice cooked in stone. There is also Pyunghwa Noodle, a smaller store near the boarding gates, but the menu served there only includes about five dishes.

“This is the start,” said Yim, “[I want to] make a place where many different kinds of casual or classic Korean food is served.”

“I wanted to make the restaurant something that can embrace dishes consumed in both North and South Korea, and who knows, this restaurant could be remembered later as something that played a big role in helping two Koreas unify, if that happens.”

While Yim’s new journey takes its first step on Thursday, his already-established restaurant Jungsik will continue to present new ways to make Korean food more modern, with the new insights he learns from cooking the classics. He plans to go global again with Pyunghwaok, in the same way he brought Jungsik to New York. 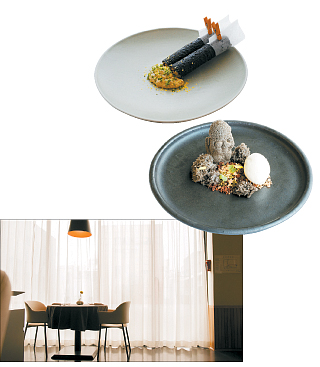 Jungsik Seoul’s dining hall is where guests are served with modern style Korean food, such as gimbap, top right, and desserts shaped like dolhareubang, a type of statue often found on Jeju Island. [JUNGSIK]

Q. How do you like starting your new adventure at an international airport?

A. The timing was perfect. The initial investment needed to open a restaurant at an airport is big, but once you are on track, you can do lots of experiments as people from different [cultural and culinary] backgrounds come and go.

How did you practice making more casual Korean food after years of making modern-style Korean food?

Through pop-up events, I taught myself a lot. I naively assumed that I should be able to make a very deeply-flavored beef broth if I just used a large amount of expensive meat. I was so wrong. I tried that and it really tasted weird. How to and how long you store it is important. The taste changes depending on when you season the broth. These details came to me [while I was experimenting], and I’m still learning. I think now I’m at the level where I can serve people without getting complaints from them. I’m still learning to make a version of gomtang (clear beef soup) that I can proudly call my own. But it’s not easy.

What have you tried in order to make your gomtang different from others?

I have grilled the beef first and then boiled it, hoping to bring out a sweeter taste through caramelizing. I have used an unspeakable amount of beef to make the soup. I even made it a bit sour like Thai Tom Yum soup. I’m still trying.

How will eating gomtang at Pyunghwaok be different from eating the dish at other restaurants?

Every restaurant or diner needs some elements that can capture the attention so that people can take photos and remember [what made their dining experience special.] I wanted to make the entrance like a scene in front of a convenience store, with [folding] tables and umbrellas. I also made an area where people can take their shoes off and sit on the floor, as well as installed a long communal table. The doves over the communal table symbolize peace, as the name of the restaurant includes peace. I looked through sites like Pinterest to get ideas and made sketches of things I wanted to have at the restaurant.

What did you sketch?

A cart that goes around the restaurant. From the cart, guests will get their share of kimchi, sesame oil, or anything else they need to make their dining experience better. I wanted to make banchan [Korean side dishes] sexy, as it is known as one of the most memorable culinary items to many who visit Korea. I was inspired by a small eatery in Tongyeong I visited that had a self-service banchan bar in the middle of a communal table. I want to show that banchan isn’t just something there to complete the main dish, but something that can be enjoyed independently as an appetizer as well.

The model I want to have is one that targets diners overseas. The plan is to take Pyunghwaok overseas. I’m giving it about 10 years for the brand to be settled [internationally.] The overall design is set to be appealing not only to locals but also to foreigners, with small design elements here and there that are inspired by Korea’s dining culture, like eating outside a convenience store or eating while you are seated on the floor.

Do you have any foreign chefs or hall managers working at Pyunghwaok?

We have about four foreigners now and some are being interviewed now. By having talent from different culinary and cultural backgrounds, we can show them what Korean style is while getting exposed to their style in our kitchen. We are in the process of making a promotional video to put on YouTube, and I think more applications may come after we release that.

What made you want to try classic Korean?

Chefs who do fine dining are more like technicians. We only see the scene in the kitchen. But in the end, it is a business to sell food. I started to see more about consumer behavior and what they want beyond what I want to present to them. It’s been almost 10 years since Jungsik opened. I was shocked when I visited Ultraviolet [a restaurant in Shanghai with three Michelin stars]. I long imagined how to bring out flavors in a dish to the nose as well, but Ultraviolet made it work. It has a unique experience. By seeing what Ultraviolet did .?.?. I started to think about doing something similar with a Korean food restaurant and making a new model for it.

What’s your plan for your two Jungsik restaurants?

Of course we will strive to make those even better and aim even higher. One thing I will try is to have my staff work only one shift, either lunch or dinner, so that they can have a better work-life balance. This will make the staff happier and more energetic, and that turns into better service in the kitchen and in the hall without mistakes. Then diners will be more satisfied.

If you were to share an insight with young chefs that you wish you had known when you started out with your own restaurant, what would it be?

Have an eye to see the bigger picture. No matter what others say, you should do what you are passionate about and what you can do for life. There is so much more to think about besides cooking food.