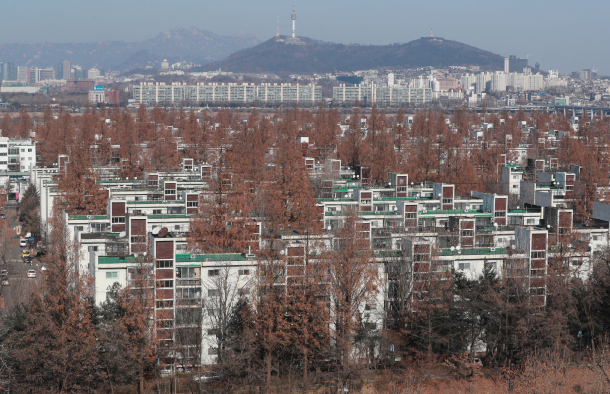 A bird’s-eye view of the Banpo Jugong apartment complex in Seocho District, southern Seoul, on Friday. The government is trying to curtail demand for homes in hot areas like Seocho District, but their popularity continues to rise. [YONHAP]

With the government set to raise taxes on owners of multiple homes, these proprietors are dumping their properties in favor of buying a single apartment in the affluent areas of southern Seoul known as Gangnam.

The effect has been a flood of money pouring into the Gangnam real estate market, where the government has been tirelessly trying to control skyrocketing prices out of fear that a bubble could burst.

Ironically, it’s the same reason why the government decided to raise taxes on multi-home owners in the first place.

Mr. Lee, 56, recently bought an apartment in Jamsil-dong, southern Seoul, for 1.5 billion won ($1.41 million) after selling two properties in other neighborhoods. “It would be wiser to focus on one home in Gangnam than pay the heavy tax on multi-home owners,” he said.

With so many homeowners selling their properties and clambering into Gangnam, real estate prices in the three southern Seoul districts of Gangnam, Seocho and Songpa have reached exorbitant heights.

When Mr. Park, 48, called the owner of a home one day for an inquiry, he arbitrarily raised the price. “I was perplexed because the landlord raised the price to 1.65 billion won ($1.55 million),” Park recalled, “even though the original price was 1.6 billion won.”

Both Lee and Park share the belief that real estate prices in Gangnam can only go up, even with tough government regulations.

In fact, they believe the government’s efforts — tightening standards for giving out mortgages, taxing owners of multiple properties and imposing restrictions on redevelopment projects — have only fueled demand in Gangnam and further increased prices. The reason: People living outside Seoul, especially in regions flagged by the government as “overheated,” are flocking to Gangnam.

The share of real estate purchases in the capital by non-Seoul residents increased from 21 percent during the June-August period to 23 percent between September and November.

August was when the government added several cities to its list of “hot” areas, which subjected them to several restrictions. Banks had to follow stricter criteria to give out mortgages. Sellers had to prioritize buyers without homes. The so-called August measures were billed as the strictest in over a decade.

Mr. Kim, a 44-year-old resident of Daegu, signed a contract to buy an 84-square-meter (904-square-foot) apartment in Daechi-dong, southern Seoul, for 1.95 billion won last month. “When you consider the potential room for further price increases, the best option is Gangnam,” he said. “Deep pockets living outside of Seoul are eager to buy an apartment in the area.”

Realtors say the herd effect is also linked to stagnant housing markets outside the capital. “The real estate market is not in good shape in other regions, so the rich have started turning their eyes to Gangnam,” said Jeon Young-joon of the Sebang Real Estate Agency.

Given the side effect of the government’s clampdown on owners with multiple homes, many financial analysts are questioning the efficacy of its regulations, with one banker openly asking if the government was serious about lowering real estate prices in Gangnam.

An index measuring supply and demand in the districts of Gangdong, Gangnam, Seocho and Songpa recently reached 116.7, the highest since the record was kept in July 2012. A reading above 100 suggests demand is outpacing supply.

Since his inauguration in May, President Moon Jae-in’s administration has announced six sets of real estate regulations, but prices in Gangnam have still jumped. It reflects a cycle that previous administrations have experienced: property values rise, the government announces regulations in response and prices flatten, only to then rise again.

President Moon’s mentor, Roh Moo-hyun, experienced the same pattern when he was president, so much so that some have taken to calling Moon’s policies Roh 2.0.

At the heart of Gangnam’s resurgence is a tax hike for buying a second or third home. Currently, the capital gains tax ranges from 6 to 40 percent, depending on the profit.

Things will change in April when a person who already owns a home and buys a second one will face 10 percent more on top of the base rate. People who already own two will have to pay an additional 20 percent.

Kim Dae-hoon, 49, who owns apartments in Seongbuk District, central Seoul, and Seocho District, southern Seoul, decided to sell the one in Seongbuk to avoid the tax burden.

“There is no reason to sell an apartment in Seocho District because the price will likely increase further,” he said. “Even if I sell, there are no viable investment options in this low-interest period.”

Realtors are seeing people in other parts of Seoul flocking to Gangnam and dumping their other properties.

“The government’s policy to target multi-home owners will favor a single-home owner in Gangnam than those having several homes outside the area,” said Kwon Dae-joong, a professor of real estate at Myongji University. “At a time when Gangnam homes on the market are rare, the demand is surging.”

Aside from the tax, the government has sought to cool the market by making loans harder to get, but analysts say that hasn’t turned people away because of a mechanism called “gap investment.”

Gap investment refers to the process whereby tenants buy the apartment that they’re renting. Many Koreans rent apartments on jeonse contracts, where the total rent — typically for two years, sometimes four — is paid in full at the beginning. A tenant then receives the money back from the landlord after moving out.

In gap investment, instead of getting the money back, a tenant requests the amount be deducted from the home’s market price. If Mr. Choi wants to buy the 1.1 billion won apartment he’s living in and gave the landlord 700 million won for the jeonse contract, he will only have to pay 400 million won for the unit.

“In Gangnam, buyers usually have much more flexibility in raising money for buying homes,” said a real estate agent in Banpo-dong, southern Seoul, “so there are not many cases where buyers are unable to make transactions due to loan issues.”

Experts say the government needs to change policy direction and focus on increasing supply rather than suppressing demand.

“Gangnam has the tendency to rise further whenever regulation targets the region, and there are no viable, short-term measures to restrict prices there,” said Shim Gyo-eon, a real estate professor at Konkuk University. “The government ought to focus on providing stable supply in and nearby Gangnam from the mid- to long-term perspective.”