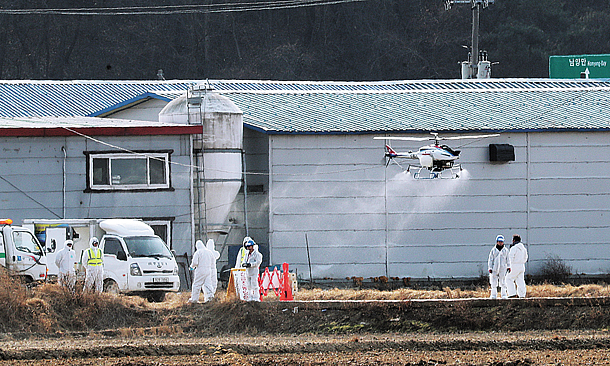 A drone sprays disinfectants on a poultry farm in Pyeongtaek, Gyeonggi, on Sunday, that was suspected of being infected with bird flu. [YONHAP]

Bird flu was detected on farms near Seoul over the weekend, which forced the government to scramble to stem an outbreak before the Olympics.

The Ministry of Agriculture, Food and Rural Affairs said it confirmed that a highly pathogenic strain of H5N6 avian influenza was found on a chicken farm in Hwaseong, Gyeonggi, about 40 kilometers (24.8 miles) south of Seoul, on Saturday. The ministry also said Sunday that a chicken farm in Pyeongtaek, another city in Gyeonggi about 70 kilometers south of Seoul, reported a highly pathogenic strain of the virus as well.

The government culled some 190,000 chickens in Hwaseong, including from nearby farms, and some 144,000 chickens at the Pyeongtaek farm. The government of Gyeonggi also said in a press release that it ordered the slaughter of 430,000 chickens on farms in a 500-meter (546.8-yard) radius of the Pyeongtaek farm as a precautionary measure. The officials destroyed 467,000 eggs as well and are in the process of tracking some 500,000 more eggs produced at the Hwaseong farm.

The outbreaks of bird flu in Gyeonggi came less than two weeks before the start of the 2018 PyeongChang Winter Olympics, which officially begin on Feb. 9. They were also the second and third outbreaks of avian influenza in the province of Gyeonggi this month.

As a result of the cases found over the weekend, the authorities have placed poultry farms across Gyeonggi on a special watch and declared a special warning starting 6 p.m. Saturday. They have installed guard posts at the entrances of all farms with over 50,000 birds in the region for inspection and disinfection. In addition, the government is conducting inspections and disinfections at all poultry farms in nearby areas such as Cheonan and Boryeong in South Chungcheong and Eumseong in North Chungcheong.

In Hwaseong and Pyeongtaek, where the virus was confirmed as highly pathogenic, authorities put all people working at poultry farms under quarantine for a week and imposed a ban on the distribution of poultry to traditional markets in the cities.

“The avian influenza virus we discovered at Hwaseong is highly pathogenic and spreads very fast,” said a spokesperson of agricultural ministry. “It reproduces continuously before symptoms appear in the hosts or before they die.”

According to the ministry, a total of 15 cases of highly pathogenic bird flu have been discovered since last November, which forced the authorities to cull nearly 2 million birds.