A look into the shadows of Olympic spirit: Gangwon biennale explores the darker elements of humanity

A look into the shadows of Olympic spirit: Gangwon biennale explores the darker elements of humanity 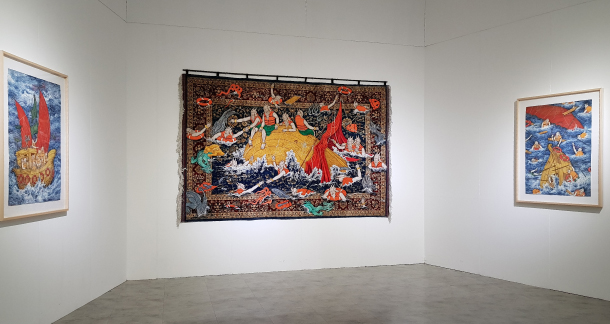 Artworks by Australian artist Khadim Ali, who fled Afghanistan with his family, are part of the ongoing Gangwon International Biennale, which focuses on the dark side of the world. [MOON SO-YOUNG]

GANGNEUNG, Gangwon - Although the Gangwon International Biennale was organized as an art event linked to the upcoming 2018 PyeongChang Winter Games, the art exhibition, which kicked off on Saturday, is far from a cheerful piece of propaganda for the Olympic spirit or a simple art show to amuse tourists. The exhibition, entitled “The Dictionary of Evil,” explores violence, hatred and the tragedies of human history, and the sociopolitical systems and backgrounds behind them.

“We started from questions about why things that contradict the ‘Olympic spirit’ of harmony and coexistence, equality, humanism and peace occur in various parts of the world,” Hong Kyoung-han, art director of the biennale, said during a press preview on Friday at the Gangneung Green City Experience Center, where the exhibition is being held. The center is located near the southeastern side of the famous Gyeongpo Lake in Gangneung.

“The Biennale reflects on the ‘faces of evil’ from artists’ perspectives; they range from wars and the refugees created by them, to migrants pushed out by capitalism and environmental changes,” he continued. “However, it does not reproduce the pain of others by simply visualizing evil. Rather, it looks back on situations and events caused by certain realistic evils that we fail to look at because we lack the sensitivity to perceive their essential qualities.”

The exhibition, directed by Hong and co-designed by three other curators - Yoo Lee, Lee Hoon-suk and Cho Sook-hyun - features 110 pieces of work by 58 artists from 23 countries. The artists range from big names such as the Swiss artist Thomas Hirschhorn and Lebanese filmmaker and artist Akram Zataari to up-and-coming artists.

The exhibition starts with Colombian artist Rafael Gomez Barros’ work “House Taken” on the first floor of Hall A. Those afraid of insects could be startled by the work, because it consists of 400 enlarged ant sculptures that seem to be crawling on the walls.

But the work is more sad than it is frightening. “They are migrants and refugees,” the artist told reporters. “They are unnoticed but they are everywhere, just like ants. By enlarging the ants, I want to [highlight] immigrants and refugees and their problems.” The artist added that each ant’s body was made to resemble a pair of skulls.

Another impressive artwork about refugees is a tapestry and paintings by Australian artist Khadim Ali on the second floor of Hall A. The tapestry, entitled ”The Arrival,” depicts a group of demons on an overturned boat and in the sea. It resembles traditional Middle Eastern art depicting a mythological scene.

But the work contains layers of meaning. According to curator Lee, the artist created the work by continually weaving and painting on an Afghan rug, which he got from the home of a friend who likely drowned while fleeing to Europe on an ill-equipped boat. While attending the funeral of the friend and talking with his family while sitting on the rug, he imagined the moment the victim drowned. The artist’s own family, who belongs to the Hazara minority, fled Afghanistan to escape persecution from the Taliban. The demons in his work symbolize the isolation and demonization of the Hazara people, according to the curator. 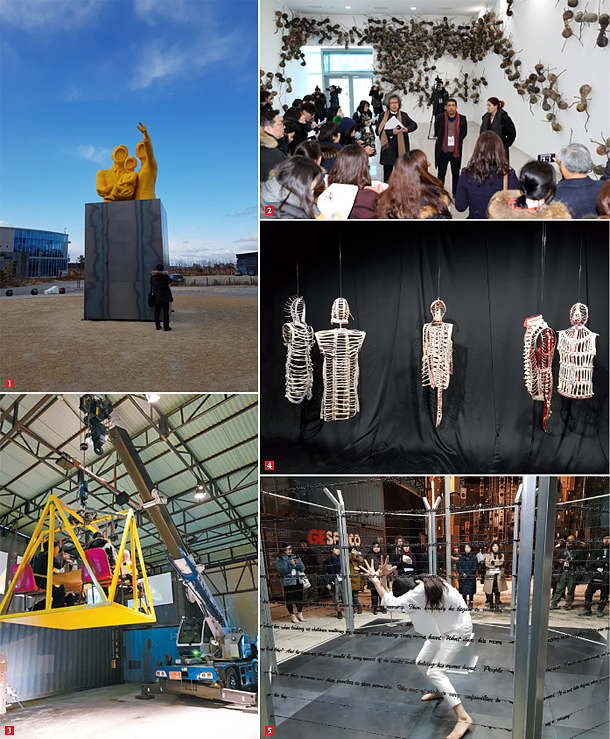 Hall A was not originally designed for exhibitions. Accordingly, sometimes the space is awkward, despite the impressiveness and power of many of the works on view. On the other hand, Hall B is a new, temporary building, which reminds viewers of gigantic container with a very high ceiling. The large-scale works and performances are on view here.

Among them is artist Sim Seungwook’s collaboration with dancer Choi Soojin titled “Stabilized Anxiety: The Stage of Eight Stories.” Sim presents an octagonal stage surrounded with metal fences that reminds viewers of the barbed-wire fences at military camps. On stage, Choi, from the Korea National Contemporary Dance Company, performs based on eight different narratives of people facing tragedy, such as extreme poverty or violence.

“The viewers will look at the performer over the metal fences and sometimes take pictures,” the artist told the reporters after the performance. “That’s what I intended. That’s the way what we see ‘the pain of others.’”

It would be difficult for Shin Je-hyun to present his performance work “Happy Meal” if the exhibition space was not a large, container-like building, because it requires a crane. The four performers, including curators and public servants of Gangwon, have a meal and talk inside a structure lifted 5 meters (16.4 feet) above the ground by the crane. They represent four real refugees from Southwest Asia and Africa in Korea, whom the artist interviewed. “The meal in the air represents their unstable situation and their anxiety,” the artist explained.

Not all the works on view have a dark ambience. German artist Kaethe Wenzel’s “The Bone Costumes,” which the artist created with the bones of animals killed by cars and chicken from restaurants, may seem like it is talking about the sacrifice of animals, but the artist says it also reflects their dream of coming close to and communicating with animals.

The other Korean artists at the exhibition include those well known for their works laden with sociopolitical themes, such as Lee Wan, who was part of the Korean Pavilion at the 2017 Venice Biennale, and Im Heung-soon, who won the Silver Lion award at the 2015 Venice Biennale and is currently holding a solo show at the National Museum of Modern and Contemporary Art’s Seoul branch.

The Gangwon International Biennale continues through March 18. Admission is free. The venue is 10 minutes by car from the Gangneung KTX Station. For details, visit www.gwbien.com or call (03) 651-0784.