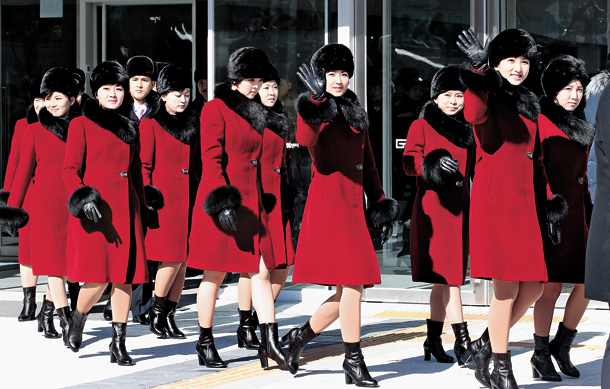 Seoul considers Kim Yo-jong the closest person to Kim Jong-un in the North Korean regime, making Pyongyang’s decision to send her to the South a possible sign of better ties ahead.

A South Korean government official said chances were high that Kim might carry a message from her brother, which would be the closest thing to a one-on-one discussion between South Korean President Moon Jae-in and Kim Jong-un.

A Blue House official said on background that having Kim Yo-jong in the delegation would enable Seoul to hold “much deeper discussions” with North Korean officials, but that it “won’t be easy” to talk about North Korea’s denuclearization at the start. 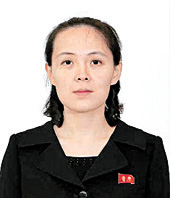 But Kim Yo-jong’s visit could become an issue between Seoul and Washington. In January 2017, the U.S. government added her to its economic sanctions list, saying she was linked with the regime’s human rights abuses and censorship. The South’s Foreign Ministry at that time said it “welcomed” the move.

On Wednesday, a local government official said Seoul was discussing her visit to the South with Washington.

The younger Kim will be part of a 23-member high-level delegation led by Kim Yong-nam, president of the Presidium of the Supreme People’s Assembly, North Korea’s rubber-stamp legislature, and technically head of state.

According to South Korea’s Unification Ministry, which handles inter-Korean affairs, Pyongyang told Seoul through the Panmunjom hotline on Wednesday afternoon that both Kims will be accompanied by Choe Hwi, chairman of the National Sports Guidance Committee; Ri Son-gwon, chairman of the Committee of the Peaceful Reunification of the Country of the Democratic People’s Republic of Korea; three reporters; and 16 support staff.

Choe is another sore spot for Seoul because he’s blacklisted by both Washington and the United Nations Security Council, the latter of which imposed a travel ban on him. A local government official said Seoul was consulting with the UN sanctions committee on whether South Korea could be granted an exception for his visit.

Last month, a senior official in South Korea’s ruling Democratic Party told the JoongAng Ilbo that Kim Yo-jong was promoted in October 2017 from vice-director of the Central Committee’s Propaganda and Agitation Department to first vice-director of the powerful Organization and Guidance Department. The promotion, said the official, was another sign that Kim Jong-un was solidifying his grip on power by swapping out remnants of the former leadership with his own picks, including his own sister.

The Organization and Guidance Department generally has overall personnel control over senior officials in the party and military. Around the same time, North Korean media announced that Kim was named an alternate member of the Workers’ Party’s Politburo at the second plenary meeting of the 7th Central Committee.

Earlier Wednesday, nearly 290 members of a North Korean delegation including 229 cheerleaders, 26 taekwondo performers, 21 reporters and four National Olympic Committee officials touched down in South Korea for the PyeongChang Winter Games, telling local reporters they were prepared to “show something that’s never been seen before.”

Delegations from the North that arrived earlier in the South for the Games included some 140 members of the Samjiyon Orchestra, 22 athletes competing in the Olympics as well as other support staff and sports officials, bringing the total number of North Korean visitors in South Korea right now to around 475.

Pyongyang has sent cheerleaders to South Korea on three occasions in the past: to the 2002 Asian Games in Busan, the 2003 Summer Universiade in Daegu and the 2005 Asian Athletics Championships in Incheon. For the PyeongChang Olympics, the cheerleaders will root for both the North and the South.

One cheerleader was quoted by pool reports as telling a South Korean reporter that she had come to the South for unification, adding she only had a couple of days to prepare for the Olympics. Among the instruments she and her cohorts will use are a kkwaenggwari (small flat gong) and jing (large flat gong), she reportedly mentioned.

Kim Il-guk, head of North Korea’s National Olympic Committee, stood in front of cameras and suggested the two Koreas “combine forces and do well” in the Winter Games.

The Unification Ministry held a welcome ceremony for the cheerleaders, taekwondo performers and reporters on Wednesday evening at the Inje Speedium in Gangwon.

As for the Samjiyon Orchestra members that arrived in Mukho Port in Donghae, Gangwon, on Tuesday aboard a North Korean ship, the Unification Ministry said Pyongyang had asked Seoul to provide fuel for the Mangyongbong-92 ferry and that local authorities were reviewing that option.

Offering the North any refined petroleum product is tricky for Seoul because the United Nations Security Council allows the regime to import no more than 500,000 barrels of it a year.