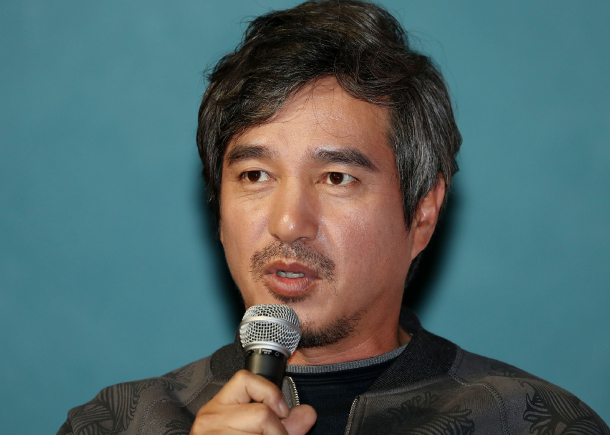 Veteran actor Cho Jae-hyun, known for the 2002 movie “Bad Guy,” will step down from the ongoing tvN series “Cross” following allegations about his past sexual conduct.

“We internally concluded that it’s inevitable for Cho Jae-hyun to step down,” read an official press release from the drama’s production team. “We will try to take his scenes out [from the series] as quickly as possible, and will do our best until the last shooting to minimize the inconvenience [Cho’s misconduct] could cause to the audience.”

“Cross,” a medical thriller that kicked off on Jan. 29, features Cho as its protagonist. Despite Cho’s central role, the Monday-Tuesday drama will not even be temporarily canceled, and will go on air today as scheduled.

The 53-year-old movie, stage and television actor made an official apology a day after an actress hinted in an online posting that Cho had sexually abused her.

“I’ve lived a wrong life. Throughout almost the three decades of my entertainment career, I have made a lot of mistakes to staffs, fellow and junior actors through my [inappropriate] words and behaviors. I am an offender. I bow my head in apology to the past victims who I have hurt,” said Cho on Saturday through a statement. “I won’t try to temporarily evade from [this situation]. I will step down from everything, and will spend time looking back on my life, atoning for the victims.”

On Friday, female actor Choi Yul wrote on her SNS account, “I’ve been waiting for your case to be exploded some day. That time has arrived earlier than I had expected. This is only the beginning. There is so much trash to dump.” The post, which included the hashtags #MeToo and #WithYou, was widely circulated on social media.

Following the disclosure, Cho also stepped down on Sunday from his position as an executive director at the DMZ International Documentary Film Festival, where he has been holding the position since the first edition of the film event in 2009.

Among other names that have stirred the entertainment industry over their sexual misbehavior include actor Oh Dal-su and director Cho Keun-hyun.

The controversy over the 49-year-old Oh, who has built a name for himself for his comedic roles, began following a comment on the article that exposed the prominent playwright and theatrical director Lee Youn-taek for his sexual abuse of young female actors. Oh debuted in 1990 via the criticized Street Theater Troupe (called Yeonhuidan Geolipae in Korean), founded by Lee.

The comment wrote, “At a small stage in Busan in the 1990s. A stage actor privately and habitually sexually molested younger actors. To me, he is a pervert and a psychopath. After being forced to go through the terrible experience, I had to be psychologically treated and have been mentally suffering over the past 20 years out of shock.”

The comment explained that the culprit has now become a famous supporting actor, recognized for comedic roles. The actor put his hand inside the victim’s shorts and “recklessly stirred it,” according to the writer.

The comment was deleted, but its capture soon spread across the internet, leading to several assumptions as to who that “bold” actor was until Oh’s name made it up to several media headlines starting on Friday. Since the comment went viral, Oh and his agency have been avoiding media contact.

Oh starred in many big movies with commercial success. They include the period comedy “Detective K” franchise, whose third series is currently being screened, and “Ode to My Father” (2014).

Also being accused is art director-turned-director Cho Keun-hyun, who two weeks ago presented historical epic “Heung-boo: The Revolutionist,” which gained media attention after it became the posthumous work of late actor Kim Joo-hyuk.

The exposure was made online earlier this month by an aspiring screen actor in her 20s, but became controversial only recently. The female actor described herself as a 24-year-old university graduate with a major in acting, and explained that she was indirectly asked by a director in 2016 to sleep with him to get a role on a singer’s music video that the director was working on. She did not reveal the director’s name but it was later confirmed to have been Cho.

On Feb. 6, she wrote on her social media account, “These are the exact words that I heard from the director at his workspace during a meeting for [an audition for] a singer Y’s music video at 3 p.m. on Monday on Dec. 18, 2017.”

She quoted the director as having said, “For female actors, acting skills are not what’s important. There are tons of actor wannabes. They just need to know how to knock men down,” adding, “Pretend to be clean and remain a supporting actor, or knock down [a director] and become a main actor. Which one do you think is better? Movies are recorded forever. Nobody remembers supporting actors.”

After the allegations about Cho’s inappropriate comments and behavior surfaced, the director was excluded from all promotion activities for “Heung-boo.”

Since the scandal erupted, Cho flew abroad and has avoided all media contact.