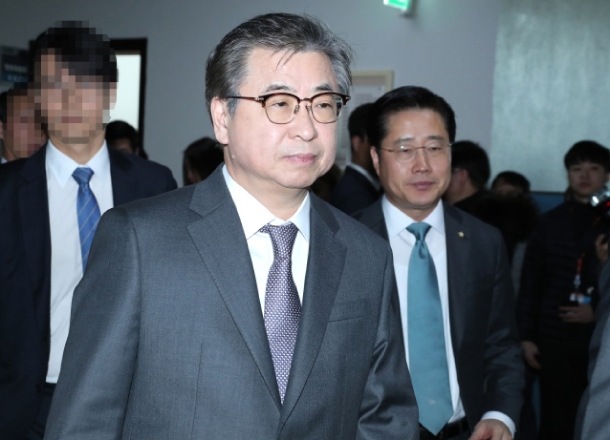 On May 9, 2017, the day of the presidential election, the one person who guarded president-elect Moon Jae-in’s residence in Hongeun-dong, western Seoul, was Seo Hoon, now director of the National Intelligence Service (NIS). While the campaign staff celebrated from the moment the election victory was confirmed, he dashed to the Hongeun-dong residence. First he changed the phones to scramblers that cannot be tapped and checked the security. He also prepared for President Moon’s phone call with Chairman of the Joint Chiefs of Staff Lee Sun-jin as the commander-in-chief next morning.

Moon asked him to be his spy agency director around 9 a.m. on May 10. Suh is the only person that the president-elect personally appointed in his residence.

Suh is not simply a right-hand man, but was a shadow for Moon through the campaign. In 1979, when Suh was an education-major senior at Seoul National University, the Korean Central Intelligence Agency handpicked and recruited him. At first, he did not wish to join the intelligence service and avoided the agents, but destiny led him to a career of 29 years with the spy agency.

As a veteran intelligence officer, he says, “It is best for citizens not to be aware of the presence of the NIS.” It is very true. We are better off without the intelligence agency that manipulates public opinion with online postings, has surveillance on civilians and causes trouble with special activities expenses.

However, the director’s stealth presence was exposed as the U.S. government told the Washington Post about the canceled Blue House meeting between U.S. Vice President Mike Pence and Kim Yo-jong, North Korea leader Kim Jong-un’s sister and first vice director of the Central Committee of the Worker’s Party of North Korea.

According to the Post, the meeting was arranged by CIA Director Mike Pompeo, and it was the Korean National Intelligence Service that informed the U.S. of Pyongyang’s intention to talk.

Naturally, questions arise. If the tip that the NIS gave to the CIA is true, it means that there is a hotline between South and North Korea. Then, who would be Suh’s North Korean counterpart?

There is analysis that suggests that Kim Yong-chol, head of the Unification Front Department of North Korea, is the likely partner. It is truly ironic. South Korea had to establish a talk channel with the hardliner who is considered the mastermind of the sinking of the Cheonan warship and often threatens to make a “sea of flames.” Despite the irony, we can hardly avoid dealing with him. “Let us never negotiate out of fear. But let us never fear to negotiate,” former U.S. President John F. Kennedy once said.