‘Misty’ remains a mystery for show’s cast and crew

‘Misty’ remains a mystery for show’s cast and crew 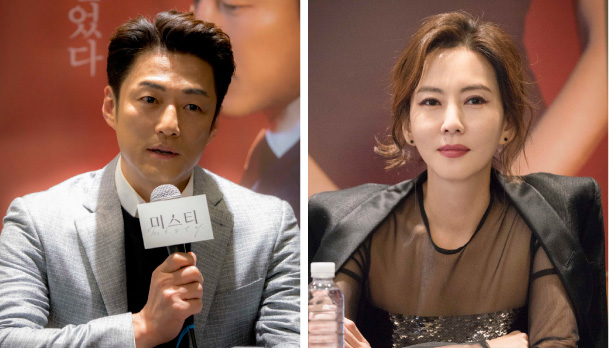 The culprit behind the mysterious murder in the ongoing JTBC series “Misty” is still unknown, even among the drama’s production team, said main protagonist Ji Jin-hee during a press event held in Sangam-dong, western Seoul, on Friday.

Centering on lawyer Kang Tae-wook (Ji Jin-hee) and his wife Go Hye-ran (Kim Nam-joo), “Misty” is a tale about Hye-ran, an ambitious television anchor, getting mired in a murder case. Believing that his wife is innocent, Kang defends his wife despite their failing relationship. While defending her, the couple falls back in love.

“I’m sure everyone is very curious to know who the culprit is and how the drama will end,” Ji told reporters of the mystery-romance series, which is enjoying an average of 6.3 percent viewership, according to data from Nielson Korea.

Although the script has been completed, the ending is still open for discussion among the crew, actors and even the director, according to Ji. “In short, nobody knows how the story will end.”

For Kim, it was easy to connect with her character because she is also a go-getter.

“I felt connected to the character in that I too am a very ambitious person and I loved how honest she was. I think that many viewers admire her confidence and candidness. In real life, we all go through times when we can’t stand up for ourselves and say whatever we want,” Kim told reporters. “However, Go is a character who is up front with people, whether they are her co-worker or her boss.”

The unconditional love that Ji shows his fictional wife on the series may be far from what people expect from love in real life.

However, Ji believes that this kind of love is possible.

“I believe unconditional love could exist in real life. I think many of the men in our society have a hard time showing love towards their partner. Maybe it’s because they’re shy,” Ji said.

The actor added, “I understand because I used to be that way to my wife. After filming many dramas where I was able to play characters who are not afraid to show affection, I realized that it’s not such a hard thing to do. Once I began really appreciating my wife and showing my love for her, it got easier and easier until it became the most natural thing.”

The final episode of the drama is scheduled to air on March 24.