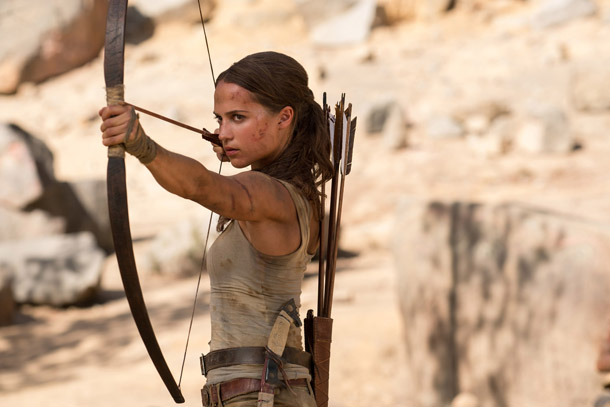 The reboot of “Tomb Raider,” starring Alicia Vikander, arrived in second at the Korean box office this past weekend, coming in behind “The Vanished.” [WARNER BROS. KOREA]


In its first weekend, the local thriller “The Vanished” easily outpaced Hollywood action-adventure reboot “Tomb Raider,” which made its Korean debut on Thursday.

“The Vanished,” which was released on Wednesday, is a Korean adaptation of the 2012 Spanish film “The Body.” Starring Kim Sang-kyung, Kim Kang-woo and Kim Hee-ae, the movie revolves around a professor who killed his wife and a detective who has been assigned to the case after the wife’s body goes missing from the morgue.

At second was the reboot of “Tomb Raider.” The action adventure movie sold 315,000 tickets at 806 screens over the three days, bringing its sales total to 375,000 admissions. It features Oscar-winning actor Alicia Vikander as heroine Lara Croft, who originated in a video game and was later played by Angelina Jolie in two films.

While last weekend’s highest-grossing movie “The Princess and the Matchmaker,” starring Shim Eun-kyung and Lee Seung-ki, dropped to the fourth spot, selling 157,00 tickets, Japanese adaptation “Little Forest,” starring Kim Tae-ri, dropped only one spot to land at third, after selling 263,000 tickets between Friday and Sunday.

Marvel’s “Black Panther” rounded out the top five with 71,000 tickets sold. The superhero saga set in the fictional African country of Wakanda has sold a total of 5.34 million tickets since its release on Feb. 14.

New releases “The Florida Project,” which tells the story of a struggling family living in the outskirts of Disney World, and “Only the Brave,” revolving around a crew of wildfire fighters from Arizona, debuted at eighth and ninth, respectively.

In the coming weekend, a number of romance movies will give moviegoers more options at local theaters, including an adaptation of the Japanese romance tale “Be With You” and “Cheese in the Trap,” which is based on a popular webtoon that was also a well-received television series that aired in 2016.