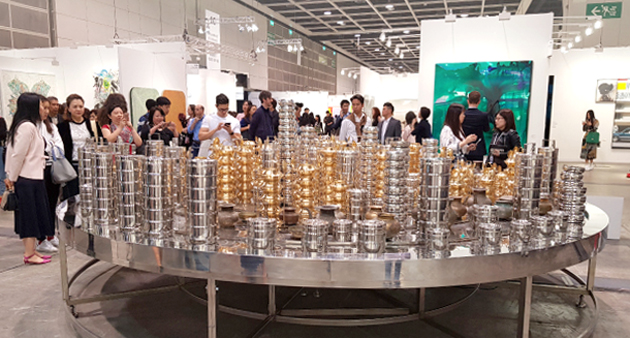 “Start. Stop.” by world-famous Indian artist Subodh Gupta is on view at the sixth edition of Art Basel Hong Kong on Wednesday at the Hong Kong Convention and Exhibition Center. The installation work is presented by Korea’s Arario Gallery as part of the prestigious art fair’s Encounter sector for large-scale artworks suitable for museums. [MOON SO-YOUNG]

HONG KONG - Visitors to the sixth edition of Art Basel Hong Kong, which runs through Saturday at the Hong Kong Convention and Exhibition Center, will encounter a huge table with its circular, metal top slowly rotating. On the top are scores of what look like golden and silver miniature towers. Actually, they are dabba or tiffin carriers, in which Indian housewives send home-cooked lunches to their husbands at work everyday via professional delivery men called dabbawala.

The installation entitled “Start. Stop” is from Indian artist Subodh Gupta, who gained fame with the monumental pieces he created with kitchen-related objects which reflect India’s old traditions and modernization simultaneously. The work is presented by Korea’s Arario Gallery as part of the prestigious art fair’s Encounters sector for large-scale or site-specific artworks suitable for museums.

This year, the Encounters sector features a total of 12 works by British artist Ryan Gander, Cuban artist Jorge Pardo and others. Among them is even a performance project that requires audience participation, which seems to be a better fit for a biennale than an art fair. It is famous Austrian artist Erwin Wurm’s work “One Minute Sculptures” which instructs the audience to become a sculpture for 60 seconds using props such as a stuffed pink bunny on an open stage.

“There are more and more collectors with such different tastes, so it’s difficult to say there is a certain trend for this year’s edition,” Nick Simunovic, managing director of Gagosian, said during a private viewing of Art Basel Hong Kong on Tuesday.

There are a total of 248 galleries from 32 countries, including emerging galleries presenting works in the Insights and Discoveries sectors. The art fair provided private viewings on Tuesday and Wednesday and opened to the public on Thursday. The participants include 11 Korean galleries; Arario, Hakgojae, Kukje, One & J, PKM, and Leeahn in the Galleries sector and 313 Art Project, Baton, EM, Johyun and Wooson in the Insights sector. 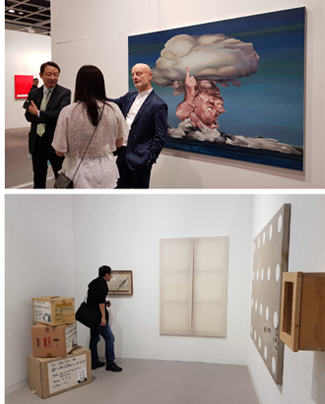 Top: Woo Chan-kyu, left, chairman of Hakgojae Gallery, and Uli Sigg, right, a Swiss businessman and famous art collector, converse about pieces of minjung art, or Korean social realism art, on view at the gallery’s booth on Wednesday. Above: A viewer, on Tuesday, looks at Korean artist Kim Yong-ik’s conceptual artworks, which Kukje Gallery presents in a small room within its booth, as part of Art Basel Hong Kong’s Kabinett sector. [MOON SO-YOUNG]

In Lehmann Maupin Gallery’s booth are Do Ho Suh’s works including a toilet sculpture made of translucent fabric. Haegue Yang’s diverse sculptures ranging from those made of artificial straw to those covered with numerous brass-plated bells are seen not only in Korean gallery Kukje’s booth but also in those of Paris-based Galerie Chantal Crousel and New York-based Greene Naftali Gallery. And Berlin-based gallery Carlier Gebauer presents Kyungah Ham’s works created in collaboration with embroiderers in North Korea.

As for Nam June Paik (1932-2006), the Korean-born pioneer of video art, Gagosian presents a rarely-seen work, “Ball and Camera.” Protruding through a tear in a red rubber ball installed on the wall is a video camera.

According to Simunovic, Paik put the camera into the ball with a small opening and let the camera shoot video, while rolling the ball. “He used the video images for many of his video art pieces, while making the ball and the camera a separate sculpture,” said Simunovic. Meanwhile, Korea’s Hakgojae and Kukje also present Paik’s so-called TV sculptures.

On the other hand, the number of dansaekhwa, or Korean monochrome paintings, has significantly dropped both in Korean and foreign galleries’ booths, compared to two or three years ago when dansaekhwa was at the height of its popularity worldwide. “Even paintings from foreign abstract artists, who were often associated with dansaekhwa painters, are not as frequently seen in this year’s fair as before,” a market insider said.

“Among the artists in the generations after dansaekhwa, Kim Yong-ik and Haegue Yang are getting a lot of attention from collectors,” said Lee Hyun-sook, head of Kukje Gallery. 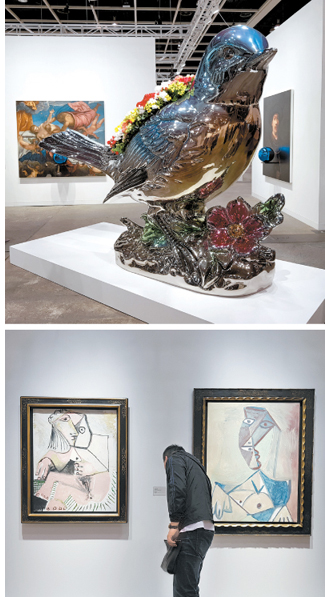 The Kukje Gallery booth starts with Korean modern master Kim Whanki’s (1913-1974) spectacular blue dot painting from his New York period and ends with works by Yang and Ham. The gallery also presents Kim Yong-ik’s conceptual artworks across his 40-year career in a small room within its booth, as part of Art Basel Hong Kong’s Kabinett sector. The Kabinett sector features specially-curated projects from participating galleries, mainly a mini-retrospective of an artist represented by the gallery.

“Now, it’s time for minjung art to succeed dansaekhwa in leading the market,” Woo Chan-kyu, chairman of Hakgojae Gallery, said on Wednesday. “Not only in Korea but also globally, the center of art market is moving from abstract art to figurative art.” Minjung art, or people’s art, refers mainly to Korean social realism paintings that developed in the 1980s amid resistance against the military regime.

“We put more focus on minjung art this year,” Woo added, pointing to works by major minjung artists such as Kang Yo-bae, Yun Suknam and Shin Hak-chul on display.

Uli Sigg, a Swiss businessman and famous art collector, stopped by the Hakgojae booth and, after viewing the works with interest, took a picture of Shin’s new painting “Your Portrait ? Stop Playing Games” in which American president Donald Trump’s face and signature gesture are exquisitely combined with a mushroom cloud of a nuclear bomb. “I’m very interested in political art,” Sigg said.

With major collectors, gallerists, art critics as well as tourists coming to Hong Kong for the Art Basel fair, many other art events are taking place around the city to lure them.

The Harbour Arts Sculpture Park is a public art exhibition that runs on the Central and Western District Promenade along the water until April 11. It is a 15-minute walk away from the Art Basel Hong Kong venue.

Japanese artist Yayoi Kusama’s famous pumpkin and British artist Antony Gormley’s abstract sculpture based on human forms stand against the sea, when viewed from one side.

They also stand against Hong Kong’s iconic skyline, when viewed from another side.

Korean artist Gimhongsok’s humorous sculpture “Bearlike Construction” is also among the exhibits. It looks like a big teddy bear made of black garbage bags but it is actually a heavy bronze sculpture. A total of 21 sculptures by 19 artists are on view.

Another must-see event in Hong Kong is the exhibitions at H Queen’s, a new building in Central that houses offshoots of major galleries like David Zwirner on the fifth and sixth floors, Hauser & Wirth on 15th and 16th floors, Pearl Lam on ninth and Pace on 12th.