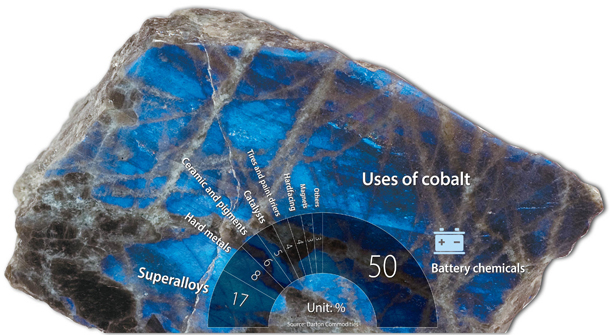 Cobalt, a once-obscure mineral best known as a ceramic dye, is turning into a hot commodity as battery makers battle to secure scarce supplies.

Electric cars are expected to explode in popularity in coming years, and cobalt is a key ingredient in the lithium-ion batteries that power them.

Earlier this month, LG Chem inked a deal with Huayou Cobalt to build two joint ventures for battery materials. The Chinese company is one of the largest suppliers of the metal in the world and produced 20,000 metric tons of refined cobalt last year alone.

The deal guarantees LG a stable supply of core battery metals, like cobalt and nickel, as well as cathode materials that it will produce through the joint ventures.

The move reflects the company’s strategy to internalize cathode production, which is a crucial step in making full batteries. Unstable cobalt supplies pushed LG to make cathodes so it can exert greater control over part prices.

LG used to purchase 75 percent of the cathodes the company used and produce the rest itself. The company plans to pull up its internal production rate to 50 percent by 2020 at the earliest.

LG isn’t the only Korean company with an eye on cobalt.

Samsung SDI won a deal from Chilean government in a consortium with steelmaker Posco to build a factory for cathodes in the country. The two companies plan to invest 57.5 billion won ($53.7 million) in the cathode plant and establish a joint venture that will oversee its operation. The facility will be located in the northern port city of Mejillones and have the capacity to produce 3,200 metric tons of cathodes annually starting in 2021.

This deal will help Samsung SDI secure supplies of lithium as well as cathodes consisted of cobalt.

The smaller battery maker SK Innovation signed an agreement with technology metals developer Australian Mines in February. The deal, which will last for an initial period of seven years, promises to deliver 12,000 metric tons of cobalt and 60,000 metric tons of nickel supplies to the chemical company starting in 2020.

According to SK Innovation, the promised amount of cobalt supplies is about 90 percent of what the company needs. The resources will be used at the company’s production plants in Korea as well as its factory currently under construction in Hungary.

The SK affiliate invested 840 billion won to build a new battery plant in Hungary to effectively respond to rising demand from European carmakers.

The efforts from these Korean battery makers are threatened by Chinese giant GEM’s latest deal. GEM managed to acquire a third of the cobalt shipped by Glencore, the world’s biggest producer.

Glencore agreed to sell 52,800 metric tons of cobalt to GEM between 2018 and 2020. That amount is about half the world’s cobalt production last year. Concerns soon arose that Chinese companies’ firm grip on cobalt will deal a huge blow to their competitors. Korean companies will have to work harder to secure the metal from many different sources.

“Hedging their risks from skyrocketing cobalt prices has become crucial for battery makers,” said a Samsung SDI spokesman. “We are trying to diversify our sources for cobalt supplies and ultimately focus on reducing cobalt content for our battery formula.” 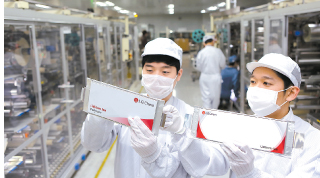 When making lithium ion batteries, lithium sounds like it should be the most important element.

But it’s much easier to source lithium than cobalt, which is also needed to produce them. There are many salt ponds containing lithium in countries like Bolivia, Argentina and Chile. Korean steelmaker Posco also has the technology to extract lithium from seawater and battery scraps.

Cobalt is mostly produced as a byproduct of copper and nickel, which makes it difficult to significantly increase the supply of the scarce element despite rising prices.

Over half of the roughly 100,000 metric tons of cobalt produced annually is concentrated in the copper-rich Democratic Republic of Congo (DRC), a country wracked by conflict where much of the mining is done by child laborers.

“If you are a buyer of cobalt, supply conditions in the DRC are your most concentrated risk,” says Colin Hamilton, managing director of commodities research at BMO Capital Markets.

Cobalt currently accounts for 10 percent of the cost of lithium-ion batteries, according to LG Chem. The recent increase in prices has been a concern not only to battery makers but also battery users, like electric car makers. For electric cars to become commercialized widely, they must be sold at competitive prices.

If cobalt prices stay high, another option is cutting the amount of cobalt entirely.

Samsung SDI is trying to reduce its cobalt use and add more nickel to its batteries. While cobalt generally accounts for more than 20 percent of the materials in cathodes, the company hopes to lower that proportion to less than 10 percent by substituting it with cheaper nickel.

“We have set the focus of our research and development on dramatically reducing the use of cobalt,” said a top official from Samsung’s battery making affiliate. “We are trying to lower the portion to as little as 5 percent.”

SK Innovation, a latecomer to the battery market compared to its two Korean rivals, announced last year that it succeeded in developing a cathode made with just 10 percent cobalt. The company plans to begin commercial sales of its batteries with lower cobalt content in the third quarter of this year. If it manages to launch the batteries by then, it will become the first company in the world to sell batteries with such little cobalt.

LG Chem is also working to launch electric car batteries with 80 percent nickel, 10 percent cobalt and 10 percent manganese in their cathodes. It is also exploring possibilities to develop other types of metal blends for next-generation battery cells, according to a company spokesperson.

Cathodes are where lithium ions are stored. Batteries operate as lithium ions shuttle back and forth from the cathode and the other side of the battery cell, which is called the anode. As ions leave the cathode, they leave behind a large space that pulls other metal ions into that space.

Cobalt is one of few elements that do not move around and can stay in place in the cathode. Plus, the element is able to offer the highest energy density for commercialized lithium ion batteries as its density is on par with graphite anodes.

“Making batteries without cobalt is like a building without pillars,” says Cho Jae-phil, a professor at the Ulsan National Institute of Science and Technology who specializes in rechargeable battery research. “There are technologies to cut down the cobalt content to less than 10 percent, but it is still very difficult for firms to keep batteries stable with that formula.”

Cho expects that the minimum cobalt level will be around 5 percent even after years of research.

As long as cobalt is included in batteries, the demand for the metal in the electric vehicle market is expected to jump from 9,000 metric tons in 2017 to 107,000 metric tons in 2026, analyst George Heppel of business intelligence group CRU told the Economist last month.

“We think it could be a popular business model in the future, since [battery producers] need to diversify their sources of cobalt supplies,” a Samsung SDI spokesperson said.

The company is currently looking into buying a stake in recycling companies at home and abroad. It did not mention which companies it is looking at, though the company spokesperson cited American Manganese and Umicore as leading recycling firms that are already making progress in the field.

Brussels-based Umicore is one of the few companies capable of recycling electric car batteries. It has agreement with Tesla and Toyota to recycle their used batteries in Europe. The deals were signed with Tesla in 2011 and with Toyota in 2012. Umicore will use the old battery pack materials to produce an alloy that can be further refined into cobalt, nickel and other metals. After that, it will transform the cobalt into high-grade lithium cobalt oxide, which can be resold to battery manufacturers, Tesla said in statement. The recycling projects with carmakers are still in preparation. Marck Grynberg, CEO of Umicore, told Bloomberg in November that recycling will take off in 10 to 12 years when the first wave of electric vehicles’ lifespans end.

“At current levels, you can’t reuse a significant amount of cobalt from used batteries due to the complexity in the designs of lithium ion batteries,” Cho said. “But the move can be meaningful in that we need to be prepared for the future.”

LG Chem is not moving to ramp up its recycling technologies at the moment, but it is watching to see whether it will be a viable option in the future.