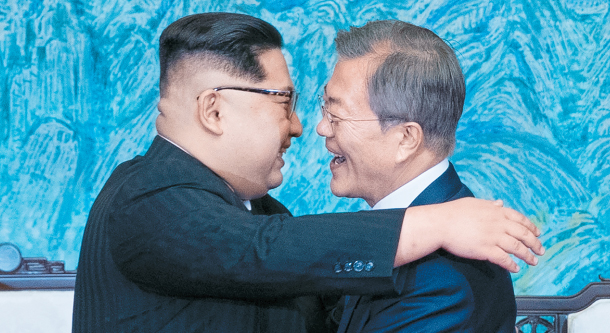 South and North Korea declared their commitment to the “complete denuclearization” of the Korean Peninsula in their joint Panmunjom Declaration, the product of the third inter-Korean summit held Friday.

“South and North Korea confirmed the common goal of realizing, through complete denuclearization, a nuclear-free Korean Peninsula,” read the Panmunjom Declaration. It continued the two Koreas “shared the view that the measures being initiated by North Korea are very meaningful and crucial for the denuclearization of the Korean Peninsula,” referring to Pyongyang’s decision to stop all nuclear and long-range missile tests and to shut down its nuclear test-site in Punggye-ri.

President Moon Jae-in and North Korean leader Kim Jong-un, however, left out details as to how to make the North “nuclear free” - and what the South was willing to reward Pyongyang with in exchange. Those complicated matters will likely be addressed at the highly anticipated Kim-Donald Trump meeting, for which a date and venue have yet to be determined.

The joint statement confirmed widespread speculation that the two leaders would opt to leave out details on denuclearization measures. It jibes with the Blue House’s position that the denuclearization issue should be dealt by the North and the United States and that it was acting as a mediator who narrows down the differences in the positions of Kim and Trump.

But on other issues about inter-Korean relations, the two leaders were much more specific, laying out a variety of measures, some ambitious.

The two agreed to try to officially end the 1950-53 Korean War by signing a peace treaty by the end of this year in three or four-way talks involving the two Koreas, the United States and possibly China.

The two also declared there would be “no war on the Korean Peninsula,” affirming their commitment to establishing a permanent peace between the two Koreas.

“We have agreed to push for establishing a peace regime that is permanent and strong by ending a status of armistice and signing a peace treaty and declaring an end to the war in place,” said Moon at a joint live press briefing to announce the joint April 27 declaration.

Moon called the consensus to formally end the Korean War a “very important agreement” that would “fundamentally alter” geopolitical relations involving the two Koreas and the outside world.

“There will be no acts of aggression against each other on the land and in the sky and sea that we live in from now on,” continued Moon.

They also agreed that Moon will visit Pyongyang this fall for a second summit with Kim.

Kim elaborated further on bringing the two Koreas closer, saying, “We agreed to measures that will pave the way to a new era of happiness and prosperity in the peaceful land of Korea, free of conflict for all Koreans.”

In the joint declaration, the two Koreas said the current state of relations between the two were in an “unnatural state of armistice,” and emphasized the need for a “robust peace regime,” calling it a “historical mission that must not be delayed any further.”

To improve inter-Korean relations and ease military tensions along the demilitarized zone, the two agreed to halt all hostile acts along the border, such as broadcasting propaganda announcements.

The two also agreed to set up a joint liaison office in Kaesong, which was home to the joint South-North joint industrial complex that, until it was shut down in February 2016, was the last remaining inter-Korean business project.

Talks by military officials on how to ease military tensions along the DMZ will be held next month, the declaration read. Talks to arrange reunions of families separated by the division of the peninsula will also take place, the two said.

The two Koreas also agreed to put into action projects forged in the joint declaration on Oct. 4 from the 2007 summit meeting of the late Kim Jong-il, the father of Kim Jong-un, and former President Roh Moo-hyun.

“As a first step, the two sides agreed to adopt practical steps toward the connection and modernization of the railways and roads on the eastern transportation corridor as well as between Seoul and Sinuiju,” read the Panmunjom Declaration.

But resurrecting those projects could violate international sanctions barring investments in the North.

Panmunjeom Declaration for
Peace, Prosperity and Unification of the Korean Peninsula


During this momentous period of historical transformation on the Korean Peninsula, reflecting the enduring aspiration of the Korean people for peace, prosperity and unification, President Moon Jae-in of the Republic of Korea and Chairman Kim Jong Un of the State Affairs Commission of the Democratic People’s Republic of Korea held an Inter-Korean Summit Meeting at the ‘Peace House’ at Panmunjeom on April 27, 2018.

The two leaders solemnly declared before the 80 million Korean people and the whole world that there will be no more war on the Korean Peninsula and thus a new era of peace has begun.

The two leaders, sharing the firm commitment to bring a swift end to the Cold War relic of longstanding division and confrontation, to boldly approach a new era of national reconciliation, peace and prosperity, and to improve and cultivate inter-Korean relations in a more active manner, declared at this historic site of Panmunjeom as follows :

1. South and North Korea will reconnect the blood relations of the people and bring forward the future of co-prosperity and unification led by Koreans by facilitating comprehensive and groundbreaking advancement in inter-Korean relations. Improving and cultivating inter-Korean relations is the prevalent desire of the whole nation and the urgent calling of the times that cannot be held back any further.

① South and North Korea affirmed the principle of determining the destiny of the Korean nation on their own accord and agreed to bring forth the watershed moment for the improvement of inter-Korean relations by fully implementing all existing agreements and declarations adopted between the two sides thus far.

② South and North Korea agreed to hold dialogue and negotiations in various fields including at high level, and to take active measures for the implementation of the agreements reached at the Summit.

③ South and North Korea agreed to establish a joint liaison office with resident representatives of both sides in the Gaeseong region in order to facilitate close consultation between the authorities as well as smooth exchanges and cooperation between the peoples.

④ South and North Korea agreed to encourage more active cooperation, exchanges, visits and contacts at all levels in order to rejuvenate the sense of national reconciliation and unity. Between South and North, the two sides will encourage the atmosphere of amity and cooperation by actively staging various joint events on the dates that hold special meaning for both South and North Korea, such as June 15, in which participants from all levels, including central and local governments, parliaments, political parties, and civil organizations, will be involved. On the international front, the two sides agreed to demonstrate their collective wisdom, talents, and solidarity by jointly participating in international sports events such as the 2018 Asian Games.

⑤ South and North Korea agreed to endeavor to swiftly resolve the humanitarian issues that resulted from the division of the nation, and to convene the Inter-Korean Red Cross Meeting to discuss and solve various issues including the reunion of separated families. In this vein, South and North Korea agreed to proceed with reunion programs for the separated families on the occasion of the National Liberation Day of August 15 this year.

⑥ South and North Korea agreed to actively implement the projects previously agreed in the 2007 October 4 Declaration, in order to promote balanced economic growth and co-prosperity of the nation. As a first step, the two sides agreed to adopt practical steps towards the connection and modernization of the railways and roads on the eastern transportation corridor as well as between Seoul and Sinuiju for their utilization.

2. South and North Korea will make joint efforts to alleviate the acute military tension and practically eliminate the danger of war on the Korean Peninsula. Alleviating the military tension and eliminating the danger of war is a highly significant challenge directly linked to the fate of the Korean people and also a vital task in guaranteeing their peaceful and stable lives.

① South and North Korea agreed to completely cease all hostile acts against each other in every domain, including land, air and sea, that are the source of military tension and conflict. In this vein, the two sides agreed to transform the demilitarized zone into a peace zone in a genuine sense by ceasing as of May 1 this year all hostile acts and eliminating their means, including broadcasting through loudspeakers and distribution of leaflets, in the areas along the Military Demarcation Line.

② South and North Korea agreed to devise a practical scheme to turn the areas around the Northern Limit Line in the West Sea into a maritime peace zone in order to prevent accidental military clashes and guarantee safe fishing activities.

③ South and North Korea agreed to take various military measures to ensure active mutual cooperation, exchanges, visits and contacts. The two sides agreed to hold frequent meetings between military authorities, including the Defense Ministers Meeting, in order to immediately discuss and solve military issues that arise between them. In this regard, the two sides agreed to first convene military talks at the rank of general in May.

① South and North Korea reaffirmed the Non-Aggression Agreement that precludes the use of force in any form against each other, and agreed to strictly adhere to this Agreement.

② South and North Korea agreed to carry out disarmament in a phased manner, as military tension is alleviated and substantial progress is made in military confidence-building.

③ During this year that marks the 65th anniversary of the Armistice, South and North Korea agreed to actively pursue trilateral meetings involving the two Koreas and the United States, or quadrilateral meetings involving the two Koreas, the United States and China with a view to declaring an end to the War, turning the armistice into a peace treaty, and establishing a permanent and solid peace regime.

The two leaders agreed, through regular meetings and direct telephone conversations, to hold frequent and candid discussions on issues vital to the nation, to strengthen mutual trust and to jointly endeavor to strengthen the positive momentum towards continuous advancement of inter-Korean relations as well as peace, prosperity and unification of the Korean Peninsula.

In this context, President Moon Jae-in agreed to visit Pyongyang this fall.