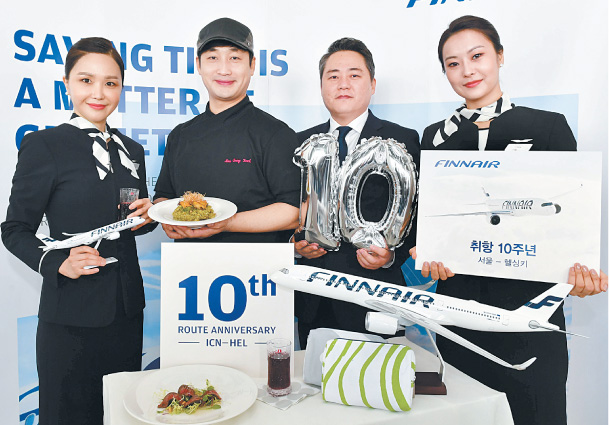 From second left, Nam Sung-yeol, a Korean chef that collaborated with Finnair to develop a new Korean-style in-flight meal, and Finnair Korea General Manager Kim Dong-hwan pose for a photo at a press briefing commemorating the 10th anniversary of the Finnish airline service connecting Incheon and Helsinki on Wednesday in Seoul. [FINNAIR]

It may soon be possible to fly direct from Busan to Helsinki, as Finnair announced a plan to introduce a direct service between the two cities on Wednesday.

The Finnish airline announced the possible new route at a press conference to commemorate the 10th anniversary of its operations in Korea. The airline started offering direct flights between Incheon and Helsinki in June 2008, offering four flights a week. It now offers seven flights a week - one per day.

The route proved to be popular. Revenue from the Korean operation has grown 4.5 times in the last decade, and the airline now has 32 Korean flight attendants.

To lead further expansion in the country, Kim Dong-hwan, general manager of Finnair Korea, said he plans to increase the number of existing Incheon-Helsinki flights and start a new service departing from Busan.

“We have been trying to open up a new service in Busan but we need approval from the Korean ministry to pursue the plan,” Kim said. “The government said it is a prerequisite for us to ink any kind of commercial agreement with Korean airlines like Korean Air and Asiana Airlines, but partnering with them has not been very easy.”

According to Kim, the company is still making various suggestions to the Korean airlines to create the partnership that the government insisted on. Kim said the commercial agreement could be any form of commercial partnership such as codeshares or smaller service partnerships.

Apart from increasing the number of flight services, the Korean office also hopes to attract more Korean customers with a Korea-specific strategy.

The company has been working with a number of celebrity chefs to upgrade its in-flight meals since 2013, and recently it selected Korean chef Nam Sung-yeol to develop a meal with a traditional Korean taste and Nordic presentation in time for the 10th anniversary of its Incheon operations.

Rice cooked with abalone and sea urchin roe as well as battered sea bass are among the newly developed signature dishes by Nam. The menu has been offered for business customers departing from Incheon to Helsinki on Finnair since Wednesday. Passengers that want to try the food in economy need to order it in advance, according to the company.

According to Kim, Finnair has a code of conduct that reflects the culture of Finland, which values equality among all employees, regardless of their status.