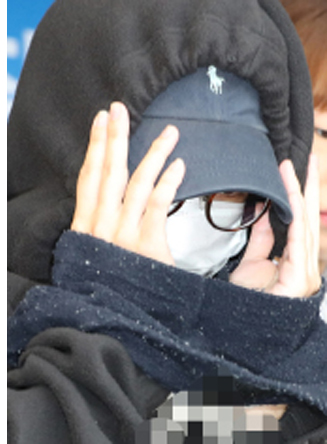 A 25-year-old woman surnamed Ahn, accused of taking the photo of a male model posing nude for a drawing class at Hongik University in western Seoul and sharing it online, at Mapo Police Precinct Saturday. [YONHAP]

More than 300,000 people have signed a petition to the Blue House calling for a more gender-equal investigation into a case of a woman who posted a photo of a nude male life model online, calling it a rush to judgement.

A Seoul court issued an arrest warrant for the suspect, a 25-year-old woman surnamed Ahn, on Saturday for the charge of violating the Act on Special Cases Concerning the Punishment, Etc. of Sexual Crimes.

“Remember the cases of women who were victims of hidden camera crimes and went to the police for help?” wrote one person on the Blue House website’s petition page on Friday. “Do you know what kind of responses they would get? They would be told, ‘Well you had it coming to you, because you didn’t dress modestly’ or ‘We can’t catch the culprit. It’s too hard.’

“Take a look at these cases when women were victims and men were perpetrators in spy camera crimes,” the user wrote. He or she posted links to articles on previous cases, including one involving five male swimmers charged with installing spy cameras in female swimmers’ locker room. They were pronounced innocent by a local court last year for lack of evidence. Another article described a case in which a man was caught taking pictures of women’s legs and buttocks in a subway station in Seoul. He also got off on “lack of evidence.”

“Just because the victim is a man and the suspect is a woman this time, the country is investigating the case differently,” wrote the person supporting the petition.

“The case is being investigated with excessive speed and articles are being churned out commiserating with the victim and pointing fingers at the suspect. I hope for a nation in which everyone receives fair investigation and protection regardless of their gender.”

The petition was supported by 314,602 people as of Monday afternoon.

The particular case began on May 1, when a photo of the male model posing nude during a life drawing class at Hongik University in western Seoul was uploaded to an online community called Womad.

The university found out and asked students in the class if any of them posted the photo. When no one came forward, it reported the case to the police on May 4.

Police questioned some 20 students and other models for the class and inspected their phones. When a model surnamed Ahn refused to submit her phone, claiming she has two phones but lost one, police found her story suspicious and questioned her from May 8 to 10.

They eventually discovered that she had a quarrel with the male model recently and started investigating her as a suspect.

Authorities seized the hard-drive of Ahn’s computer after raiding her home. She told police she chucked the phone that she used to take the photo of the male model into the Han River.

The local court issued the arrest warrant stating that “there is a possibility that she may try to destroy evidence.”

The Act on Special Cases Concerning the Punishment, Etc. of Sexual Crimes states, “A person who takes photos of another person’s body, which may cause any sexual stimulus or shame against the latter’s will, by using a camera or similar mechanism, or who distributes, sells, leases, provides, or openly exhibits or screens the photos so taken, shall be punished by imprisonment for not more than five years or by a fine not exceeding 10 million won [$9,372].”

Users at Womad have also begun criticizing the police for what they claim to be an overly zealous investigation.

“How come authorities never got around to catching culprits for spy camera cases as fast as this before?” wrote one user at Womad. “Is the male model our own Private Ryan?” wrote another user. “The whole country is taking up the cause to rescue him.”

At least one protest is scheduled this Saturday over the case.

“We ask with utmost respect that only women take part in this protest,” wrote a manager of an online community in Daum, a portal website, which was created last week to organize rallies calling for fair investigation into the case. The location of the rally was not announced by the group as of Monday.