Hanbok ambassador passes away: Lee Young-hee, who brought tradition dress to the world, was 82

Hanbok ambassador passes away: Lee Young-hee, who brought tradition dress to the world, was 82 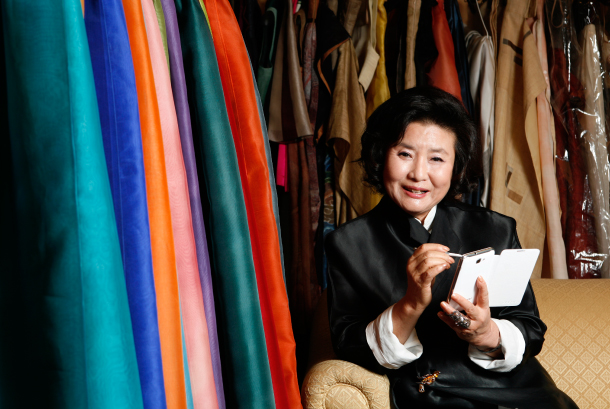 Hanbok (traditional Korean dress) designer Lee Young-hee, one of the pioneers of introducing hanbok to the world, died on Thursday at age 82. [JOONGANG PHOTO]

Korea’s pioneering hanbok (traditional Korean dress) designer Lee Young-hee, who greatly contributed in globalizing the traditional clothing, died Thursday of pneumonia. Her family told local media that Lee had been admitted to the hospital about a month ago due to pneumonia, but her health had eventually deteriorated. She died at 12:40 a.m. on Thursday due to complications. She was 82. Lee was also widely known among younger Koreans as the grandmother-in-law of famous actor Jun Ji-hyun.

Lee was more than just a celebrated hanbok designer whose work sold well - she was an ambassador of hanbok. Thanks to the government’s efforts to modernize and globalize hanbok in recent years, the world has become more familiar with the traditional dress. Today, foreign tourists can be seen taking selfies wearing rented hanbok around palaces in Seoul, an activity that has become a must-do for many when visiting Korea. Lee, who always said she had faith in the universal beauty of hanbok, saw the garment’s potential early on.

In 1993, she held her first Pret-a-Porter show in Paris. Learning about how non-Koreans perceived hanbok, Lee returned to the Paris runway in 1994, sending models down the runway wearing only colorful hanbok chima (skirts) to display hanbok as a one-piece dress. Although some traditional hanbok designers back home criticized Lee for destroying the beautiful hanbok silhouette by doing away with the jeogori (upper garment), international fashion critics praised the look. Amused by hanbok’s graceful elegance presented by Lee, a reporter from Le Monde called it the “clothing of the wind,” - making it Lee’s hallmark design.

Since then, she organized hundreds of overseas fashion shows and exhibitions, including a fashion show at Carnegie Hall held in 2000. She also donated 12 of her hanbok designs to the Smithsonian Museum of Natural History in 2007 to promote Korea’s cultural heritage. She opened the Lee Young Hee Museum in New York in 2004, but it closed in 2014 due to financial issues.

The hanbok chima (the skirt of a traditional Korean outfit) collection Lee showed on a Paris catwalk in 1994, which became her hallmark design known as “clothing of the wind.” [JOONGANG PHOTO]

During her latest solo exhibition at the Dongdaemun Design Plaza in 2015 titled “Lee Young-hee Exhibition: Wind, Hope,” she met with reporters and said that she just couldn’t let go of introducing hanbok to other parts of the world as she couldn’t stand foreigners, especially Europeans referring to hanbok as “kimono coreen,” or “Korean kimono.”

Although it seems like Lee was handed down the talent of making the finest traditional Korean attire, she once admitted, like many Koreans, that hanbok used to be simply a traditional dress you wear during holidays. But it became her life when she was 41, after she tried making hanbok to earn some extra cash as a stay-at-home mother. Seok Ju-seon (1911-1996), a scholar of traditional Korean clothing, was Lee’s teacher and someone Lee respected throughout her hanbok design career. When other traditional hanbok designers criticized Lee’s topless hanbok that revealed a woman’s cleavage, Lee had said that it was only her late teacher Seok who encourage her, saying that “clothes have to change with times,” and that she should not be afraid to try new designs. If it had not been for her teacher’s encouragement, Lee said that her hanbok would still be restricted to the traditional form.

Lee’s hanbok were not all about breaking boundaries. When necessary, she stayed true to the traditional designs of hanbok. For world leaders from 21 countries who visited Busan to attend the Asia-Pacific Economic Cooperation forum in 2005, Lee designed a traditional durumagi (overcoat), selecting colors that represent Korea.

Lee said it wasn’t intentional, but her VIP clientele included many celebrities as well as former first ladies, which she believed would help make the groundwork for hanbok’s global ascent. She had received media attention for designing hanbok for the wedding of Korea’s celebrity it-couple Jang Dong-gun and Ko So-young. After that, many people recognized Lee’s brand as “Ko So-young hanbok.” Many previous first ladies’ traditional Korean wardrobes also carried Lee’s brand name. 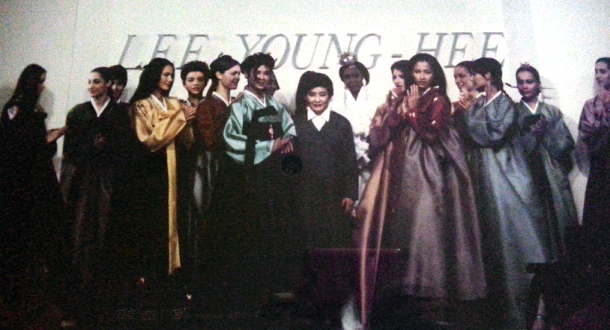 “Louis Vuitton bags are must-haves for fashion-minded people and a Chanel piece is sold every few seconds around the world,” the late designer once said in an interview with JoongAng Ilbo. “I have a vision of setting hanbok as one of the world’s top luxury choices.”

Lee’s hanbok are colorful. During her last exhibition at the DDP, a retrospective of 40 years of hanbok designs, she dedicated a part of the exhibition to colorful chima. They were waltzing in a breeze coming from a large fan to showcase her signature “clothing of the wind.” But Lee’s favorite color, she told the reporters, was gray.

“It’s my favorite color and the color I want to resemble,” Lee said. “It goes well with any other colors. When I have a hard time matching colors of the jeogori and the chima, I pick gray and it instantly produces an elegant and restful look. So resembling gray as a person means getting along with different people. I want to be that kind of person.”