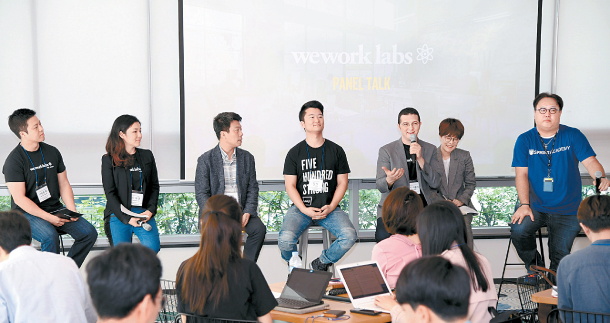 WeWork, a start-up that provides co-working office space to other start-ups, launched its WeWork Labs accelerator at three of its locations on Friday.

“Korea is one of the most exciting places to be an entrepreneur,” said Roee Adler, the global head of WeWork Labs, during a media conference at WeWork Labs Yeoksam Station II in southern Seoul on Thursday. “Korea has an amazing legacy of innovative technology and invests so much in education.”

The new Labs, in addition to Yeoksam, are coming to WeWork’s locations in Euljiro in central Seoul and Yeouido in western Seoul. A fourth Labs at WeWork’s Seolleung branch is due to open in July. Korea is the first Asian country where WeWork has opened Labs.

Members of WeWork Labs also have access to support from other Korean start-up hubs and incubators, such as Naver’s Startup Alliance, D.Camp and VintageLab, as well as mentorships from start-up veterans and big-name investors like former Naver CEO Kim Sang-hun and Kim Sang-beom, the former executive director of game developer Nexon.

Unlike other start-up incubators or accelerators, WeWork Labs does not take any equity from their members, and just collects a rental fee. Prices start at 400,000 won ($371) per person, and each branch of Labs can host an average of 100 members.

“WeWork Labs is an inclusive community [of start-ups] from different backgrounds across the globe, offline and online,” said Samuel Hwang, the head of Labs at WeWork Korea. “We have female and Chinese managers in Seoul to provide members a wide range of expertise.”

“WeWork Labs also helps and sincerely welcomes start-ups from all stages of maturity, without taking any of their equity. We conduct an application process before accepting potential start-ups to identify whether they have these two key characters: problem-solving ability and passion in their field of business,” he added.

Each of the four branches of WeWork Labs in Korea will focus on a different field. WeWork Labs Yeoksam Station II is designed around nurturing consumer goods start-ups. The Euljiro branch will specialize in education technology, the Yeouido branch in fintech and blockchain and the Seolleung branch, southern Seoul, on biopharmaceuticals and healthcare.

A New York-based company founded in 2010, WeWork now operates in 253 locations across 22 countries.

As of May 2018, it counted over 40,000 companies and 248,000 individuals worldwide as members. Some are from tech giants such as Microsoft, IBM, Samsung and Dropbox.

Since WeWork first arrived in Korea in August 2016, it has opened eight branches in Seoul, with two more - in Seolleung, southern Seoul, and Jonggak, central Seoul - scheduled to open by September.