Embracing a zero-waste lifestyle: A growing number of people are eliminating trash from their routine

Embracing a zero-waste lifestyle: A growing number of people are eliminating trash from their routine 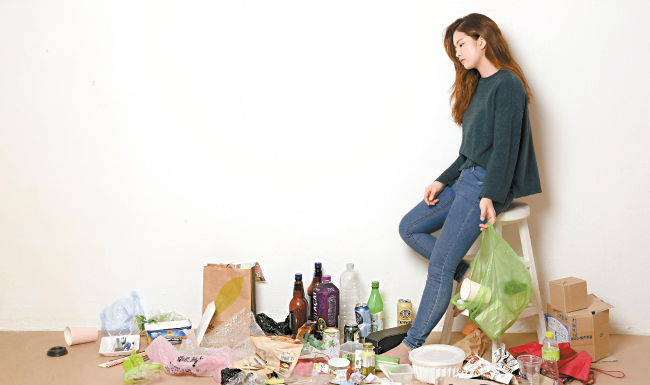 Bae Min-ji, the editor of a newly-published magazine SSSSL, aims to encourage more people to reduce litter in their daily routines by unraveling easy tips through the magazine. SSSSL will soon publish its second issue. [SSSSL]

In the age of convenience, where you can get anything done with a flick of a finger, some people are opting to live a more inconvenient life.

Instead of ordering lunch on a mobile delivery app, they cook their meals at home and carry it with them in a reusable container. Rather than purchasing groceries at a local retailer, they travel to traditional markets, where they buy fresh goods and place them inside their eco-bags. When they purchase delicate groceries such as tofu, they plan in advance and bring along a small pot to place it in and keep it fresh. And refusing to use disposable tissues, they never forget to carry around a handkerchief.

Though they may not be living as conveniently as others, those who wish to minimize the amount of waste they generate say the effort is worthwhile.

Following China’s decision to ban imports of solid waste, which took effect this year, people around the world have begun to pay serious attention to how much waste they create. The newfound awareness has placed people like Bae Min-ji under the spotlight.

An editor of the recently-published SSSSL (Small, Slow, Sustainable, Social Life), an independent magazine focusing on the theme of minimizing waste in one’s life, the 29-year-old has been pursuing a zero-waste lifestyle for the past three years. It has completely changed how Bae spends her day and how she views the world.

Before deciding to go zero-waste, Bae worked at a fast-food chain restaurant. Like her peers, she enjoyed eating fast food, bought different types of cosmetics products and purchased her outfits at fast fashion outlets.

While working at the restaurant for seven years, most of her jobs involved bringing in and throwing out cans and the vinyl and plastic packages that foods were stored and delivered in.

She was initially unaware of the tons of trash that are generated every day, but after watching a documentary about waste on television, Bae felt a sense of guilt suddenly come over her. In the film, she saw a pile of waste being exported to a country where children picked through the trash looking for items they could sell.

“It was heartbreaking to see children picking up waste that contained toxic chemicals. The scene left such a strong impression on me that I started researching the concept of zero-waste,” Bae told the Korea JoongAng Daily during an interview.

Within a month of seeing the documentary, she quit her job at the fast-food chain. Though drastic, it was only the beginning of a series of major decisions to limit the amount of waste in her life.

After embracing her new lifestyle, Bae went on to join Korea Upcycling Design Association. She found the idea of creatively reusing by-products into new materials very interesting. To become a more active member, Bae moved to Seoul from Daegu.

“Through embracing a zero-waste lifestyle, I realized that most of the people who make up the zero-waste community live in Seoul, so I decided to move to the capital to more actively communicate with people sharing similar lifestyle,” said Bae. 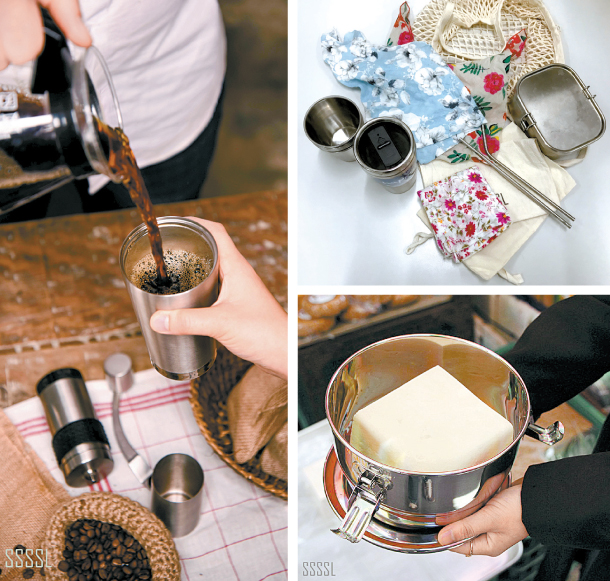 Clockwise from left are an SSSSL employee using a stainless steel tumbler to get coffee at a cafe; daily necessities that editor Bae Min-ji carries around everyday; Bae placing the tofu she purchased at a traditional market inside a pot she brought so as not to use a disposable plastic bag. [SSSSL, JIN MIN-JI]

She also started to minimize the layers of makeup she wore and the number of clothes she purchased. During her interview, Bae was nearly bare-faced and was wearing clothes she said have been inside her closet for years. The yellow cardigan she was wearing, however, was one of the fewer than 10 items of clothing she has purchased since she started cutting down her waste.

For most people, Bae’s lifestyle sounds overwhelming, and the idea of not generating waste seems daunting.

“Not generating any waste sounds impossible, though there may be a way to reduce litter,” said 25-year-old Kim Na-young. “But I’m not sure whether I can bear the inconvenience of not using disposable goods. And only purchasing what I need instead of what I want in modern society, where [my clothes] and the items I carry show who I am, will take away a lot of fun in life.”

That’s how Bae as well as many others she has met through the community felt about the zero-waste lifestyle at first. However, many of them saw a faint of hope in the feasibility of the lifestyle after reading Bea Johnson’s “Zero Waste Home,” often considered the bible for zero-waste beginners.

“I realized that I couldn’t spend a day without generating any trash, so I was extremely scared when I first decided to go zero-waste. Though I put in the effort, there was a limit,” said Bae.

To reduce litter, she even stopped snacking, although she has become a little more lenient now. “But the book gave me helpful tips on how to approach the lifestyle and how to start.”

Blogger Hong Ju-yang is another person who found the book very conducive to expanding the scope of a zero-waste lifestyle. A mother of two daughters from Daegu, Hong’s initial interest derived from the pursuit of a minimal life, which eventually expanded to zero-waste.

Some of the routines that altered her old habits included replacing a disposable dish sponge with a natural fiber scrubber like a loofah and using soaps or citric acid instead of regular shampoo (due to its plastic container). She also replaced sanitary pads with menstrual cups, and is sure to request that none of her goods be wrapped when she orders things online.

“Not generating any waste in my daily routine is very challenging, but it’s possible to reduce unnecessary waste,” said Hong. “If people start to take baby steps, wouldn’t the world gradually change?” 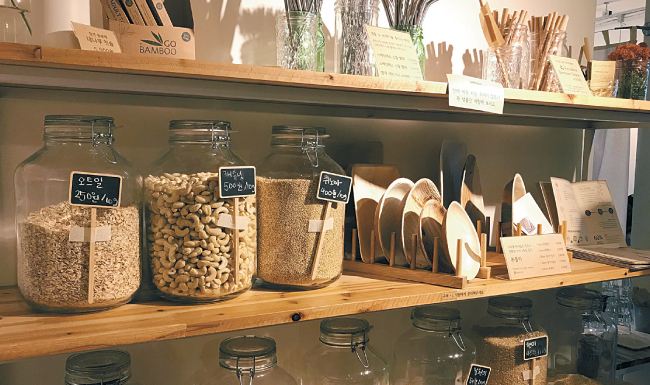 A restaurant-grocery shop that shares this belief is The Picker, which is located in Seongsu-dong, eastern Seoul. Dubbing itself “the zero waste lifestyle store,” The Picker sells several types of fruits, vegetables and grains as well as goods like reusable stainless steel straws and wooden toothbrushes.

The store is usually crowded with families, friends and couples. When this reporter visited the store late last month, a foreign customer was eating on the floor outside the store because all the seats were taken.

Encouraging people to more seriously think about the litter they’re generating each day was the core motivation behind the launch of SSSSL. The magazine was essential for Bae after undergoing a disappointing experience while working for an environmental civic group. Though Bae joined the organization to contribute in reducing litter, the civic group hardly put in any effort, saying that it was “impossible and the effort doesn’t even show,” according to Bae.

“Through SSSSL, I wanted to suggest a different, yet approachable lifestyle to readers, and to deliver stories of people who are already following a zero-waste lifestyle,” Bae added.

Quite a lot of investors agreed with her good intentions and invested a total of two million won ($1,800) through crowdfunding. Of the 500 volumes that have been printed, at least 300, which was Bae’s goal, sold in the month it was released. SSSSL put itself on another crowdfunding platform for its second issue, which is scheduled to come out this month.

Although Bae acknowledges that a zero-waste lifestyle can be a great inconvenience and can create uncomfortable situations, she says it has also brought positive changes to her life.

“The toughest moment for me while maintaining my lifestyle has been people’s [judgement]. They often think I’m being fussy over nothing and regard me as a difficult person to deal with,” said Bae.

“But it also comes with rewards. Drastically cutting my time on shopping, I can focus more on myself and use the time to the fullest to further develop myself. I came to see anything I don’t need to be a mere burden.

“I’m not a perfect zero-waster. I give up at some points when the situations force me to do so. However, I always try to brace myself,” Bae said, and added with a laugh, “especially recently following the media attention for SSSSL.”