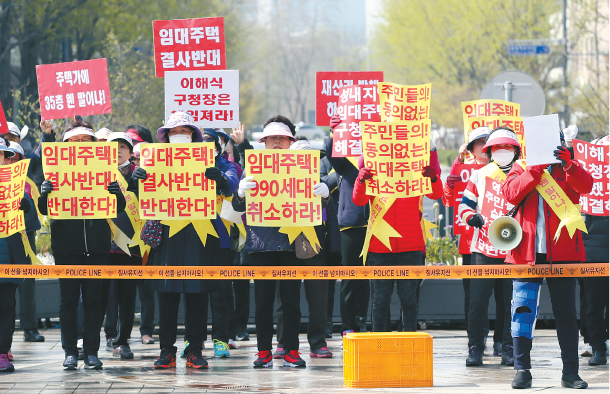 Seongnae-dong residents protest the construction of a public housing building for young people in front of the Gangdong District Office in eastern Seoul on April 9. Among their claims was that the rental units would be leased out to private interests after being offered to needy young people for only around eight years. [YONHAP]

Plans to construct low-cost public apartments across Korea are being met with fierce backlash from neighborhoods that fear plummeting real estate values if low-income families move in.

Last April, placards decrying the construction of public housing for low-income families and youths were plastered on many buildings in Dangsan-dong in western Seoul. The signs contained expressions like “slum apartments,” “housing price drops,” and “slumification of the neighborhood.” In Jungni-dong in northwestern Daegu last month, residents of an apartment building blocked construction workers from entering the building and shut down the elevator to prevent interior work on a unit being converted into a home for three disabled tenants.

Eastern Seoul’s Seongnae-dong experienced a similar movement in the same month, with residents mounting a campaign to demand the metropolitan government cancel plans to build public housing in the area.

These are three cases of neighborhoods mounting NIMBY movements, which stands for “not in my backyard.” The JoongAng Ilbo visited the three neighborhoods to understand the underlying dynamics of the dispute over public housing.

Across the street from a local commercial complex hangs a large banner with the words, “We will fight the construction of a 5-pyeong (117 square feet) public rental apartment to the death.” The sign refers to plans by Seoul’s metropolitan government to build a 19-floor apartment building for low-income youths. Approximately 626 units are to be built set with rent that would be affordable by newlyweds and other young, low-income people.

Despite the banner’s generalization, not all the units will be 16.5 square meters (117 square feet), and some range up to 41 square meters. The latter are designed for newlyweds, who may need more space later on to start a family.

When a reporter talked to a neighborhood resident who looked like she was in her sixties, the woman replied bluntly, “Who in their right mind would want a public housing building to be built in their neighborhood?” But another resident in his late 30s told the reporter, “People react sensitively because they are afraid that housing prices will drop or won’t rise anymore.

“Those of us living on jeonse [Korea’s unique long-term deposit rental system], who have no stake in housing prices, really don’t care about this. In fact, some of us consider the banners opposing construction rather ridiculous.”

The fear of real estate prices dropping as a result of the new buildings is real. A civil servant working at Seoul City Hall whose job is to convince neighborhoods to accept the new developments said people prefer that spacious, high-priced apartments or commercial buildings with numerous amenities be built in their neighborhoods. “This shows they want a high-class image for the neighborhood,” the official said.

A local realtor explained that prices in an apartment complex in the neighborhood doubled over the last five years due to its proximity to lines No. 2 and 5 of the Seoul subway and a rise in real estate prices in Yeongdeungpo District in western Seoul. “These price spikes have inflated expectations among residents,” he said. A real estate website lists a 115-square-meter unit in this apartment complex at around seven hundred million won ($651,000), higher than the median price of a house in the capital, which stood at around 4.3 million won in 2016.

Will real estate prices inevitably fall if a low-income public apartment building is built nearby? In Mapo District - just across the river from Dangsan-dong - apartment prices have continued to rise even after a rental housing unit designed for university students was built nearby. Some residents claim that prices could have risen further if the low-income housing wasn’t built, but there is no evidence to back this up.

Walk three minutes from Cheonho Station on line No. 8 of the Seoul subway and you will find banners atop low-rise residential buildings demanding that Seoul Mayor Park Won-soon withdraw plans to build public housing in the neighborhood. The residents have pledged to stake their lives in the fight against the building.

They went beyond their counterparts in Dangsan-dong by staging a rally in front of Seoul City Hall on May 17. They charged that the construction of the public housing building was a favor to the building site’s owner and that the city had not received consent from the neighborhood’s residents before proceeding with the plan.

The residents oppose the construction of a building in Seongnae-dong where a car repair shop used to be. It will have 990 units for college students, entry-level workers and newlyweds, similar to the apartment in Dangsan-dong. Monthly rent for each unit will range from 200,000 to 300,000 won (186 to 280 dollars).

When a reporter approached the protesters, they complained about a lack of fairness inherent in the plan. One middle-aged man raised his voice: “How can it make sense when they [the government] only allow us to build to the fourth floor in the neighborhood but allow that apartment building to reach 35 floors?”

Roh Cheol-ho, a local realtor who caters to young apartment seekers, commented, “This region is classified so that only three- to four-story buildings can be built, but a nearby district is allowed to build up to nine floors.

“Plans for the new apartment have raised expectations about a relaxing of the floor area ratio limit,” he said.

On May 25, there was a commotion at a low-rise apartment building in Jungni-dong, western Daegu. Residents blocked contractors’ vehicles from entering the building and shut down the elevator to prevent them from moving building materials. In the entrance hung a sign that stated, “All residents of this building oppose the moving in of disabled people to unit 701.”

The spokesman for the residents of the building in Jungni-dong claimed their opposition has nothing to do with fears of a fall in real estate value. “Unit 701 is located at the top of the building,” he said. “We oppose the plan because we don’t think housing disabled people on the top floor is safe in case there is a fire or other emergency.”

A resident in his 30s admitted something different. “Residents fear that mentally disabled people may display inappropriate behavior in the building,” he said.

“We haven’t even decided whether it will be mentally disabled or physically disabled people who will live in the designated housing,” said Kang Myeong-sook, head of the Disability Welfare Division of the Daegu metropolitan government.

“We will consult professionals to see how the move-in will affect residents before carrying it out.”

Such conflict over the status of public housing have divided neighborhoods and families nationwide. Nevertheless, some activists have sensed incremental progress through the years.

Choi Jee-hee, head of Minsnail Union, a civic organization formed by young people to solve youth-related housing issues, said, “When residents opposed the construction of a public dormitory in Guui-dong in [eastern] Seoul five years ago, they said the building as desirable as something like a garbage dump or jailhouse.”

She pointed out that many residents in Dangsan-dong and Seongnae-dong have actually been very supportive of public housing in their neighborhoods.

Seo Joon-ho, chief representative of the Solidarity for the Disabilities Human Rights of Daegu, a civic group fighting for the rights of the disabled, said, “The fact that many of those who oppose the public housing unit for the disabled have been hesitant to bring up housing prices shows progress.”

“Conflict over building public housing for youths is a transitional problem,” said Kang Byoung-keun, professor emeritus at Konkuk University and an expert on city planning. “Our society has already reached a stage where modest units like these have already become common places to live.

“The conflict that we see today serves to enlighten the older generation who are not familiar with the importance of public housing.”