The space, called the Digital Blacksmith, is filled with industrial equipment like 3-D printers, welders, laser cutters and sewing machines, and it’s open to Seoul residents interested in developing their own products. All these pieces of hardware are capable of making prototypes out of metal, plastic, acrylic, wood and ceramics. The center offers classes on safely using the machines and has professionals on hand to offer advice.

“A lot of people have ideas for new products but many don’t really know how to make them. [They don’t know] what tools they should use or which material can best realize the product in their heads,” said Ryan Jang of N15, who heads the operation of the Digital Blacksmith. “The people that frequently come to use the facilities are university students, retired engineers and women who plan to launch businesses after their careers were interrupted for personal reasons.

N15 is an accelerator for manufacturing start-ups and created the Digital Blacksmith in partnership with the Seoul Metropolitan Government. It also offers help for entrepreneurs who want to attract investment to mass-produce their products. Last year, 40 prototypes developed in the Digital Blacksmith hit the market.

This center is one of the seven “makerspaces” supported by the Seoul Metropolitan Government. A makerspace contains machines and tools for inventors and entrepreneurs to develop product prototypes.

Start-up incubators are a more common form of support. There are 28 start-up incubators operating in Seoul, and they offer seed funding, co-working spaces, mentoring and meet-up sessions for start-ups in their early stages. Start-ups have to pass a screening process to enter and receive regular assessments on their growth to continue to stay in the center. The Seoul city government also runs eight separate start-up cafes, which host networking events and mentoring sessions. 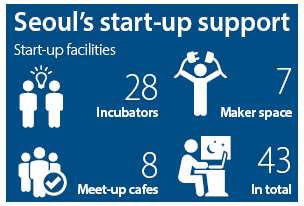 Different incubators specialize in industries such as games, biology and financial technology, while others support entrepreneurs from certain demographics, like young people or women. The Seoul Global Startup Center in Yongsan District, central Seoul, caters to the needs of foreigners who want to start businesses in Korea.

At the moment, the Seoul Global Startup Center hosts 42 start-ups from 28 countries. Teams at the center don’t have to be made up of exclusively foreigners. If one of the co-founders or core decision makers are foreigners, they can apply to join the center. 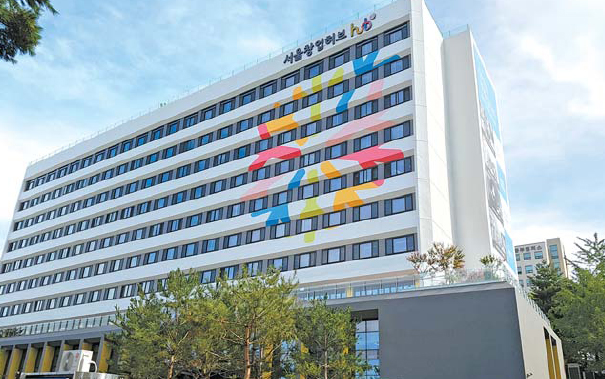 Petit K World, a company that creates animated films and characters, is one of the most successful start-ups nurtured by the Seoul Global Center. It signed a co-production contract worth 7.5 million euros ($8.7 million) with the U.S. toy company Hasbro.

“I believe the fundamental reason to create a start-up center for foreigners is the regional government’s initiative to promote Seoul as a good city to start a business,” said Park Hyo-jeong, a manager at the Seoul Global Startup Center. “Such support can also lead to foreign citizens developing a healthy and stable income source.”

At the heart of Seoul Metropolitan Government’s start-up support is the Seoul Startup Hub, located in Gongdeok-dong, western Seoul. The center, which comprises two buildings and has 14 floors in total, is the largest of the 28 start-up incubators and supports 230 start-ups as of June. Some of the companies are brand new, and some are up to 7 years old.

The hub also has offices for private partners, like angel investors and accelerators, that offer a wide arrange of advice to start-ups depending on their industry and stage of development.

For example, the building’s cafeteria on the third floor is run with a food tech incubator called Simple Project Company. The kitchen and the small booths are used by food start-ups that join the accelerator program, which is held every semester. Teams that wish to launch their own restaurants once the program is over can take over a corner of the food court and serve their dishes to other members of the start-up hub. Diners can rate the dishes on a mobile app.

“We plan to develop than 1,500 companies through start-up support centers across the company by 2022 and create 4,500 new jobs annually,” said Seoul Mayor Park Won-soon in a statement.