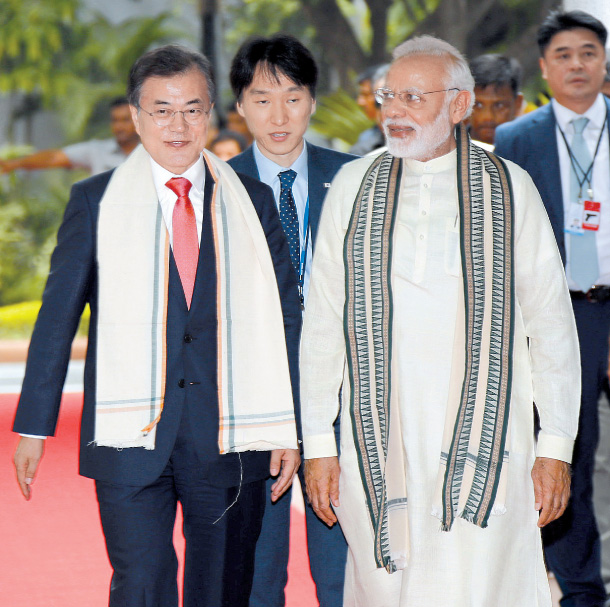 In his meeting with Swaraj, Moon said, “I have the intention to elevate Korea’s relations with India to the level of that with the four major powers, which is suitable considering India’s global status.” The four major powers refer to the United States, China, Japan and Russia.

Moon, accompanied by his wife Kim Jung-sook, kicked off a four-day state visit to India Sunday. This marks Moon’s first visit to the South Asian nation since he took office last year and comes upon the invitation of Indian Prime Minister Narendra Modi. The two leaders will hold a summit today.

Lauding the continued development of the two countries’ relations, Moon discussed how to further elevate their Special Strategic Partnership and advance his New Southern Policy, which India also has a high interest in, according to Swaraj.

Moon last November during a visit to Indonesia unveiled the New Southern Policy, a key initiative of his administrative to drastically boost exchanges and cooperation with the Association of Southeast Asian Nations (Asean), as well as India, to diversity Korea’s trade partners.

Moon also said during the 35-minute meeting with Swaraj that he views the ongoing negotiations between North Korea and the United States as “positive,” said Yoon Young-chan, the presidential senior press secretary, in a briefing Monday, adding, “Because the issue of North Korean denuclearization isn’t an easy one, even though there may be difficulties in the dialogue, the overall U.S.-North negotiations are proceeding well.”

In a written interview with the English-language daily Times of India conducted ahead of his India visit in Seoul and published Monday, Moon said, “The vision of the New Southern Policy is all about establishing a future partnership with South Asian countries for the sake of people, mutual prosperity and peace. Among them, India is a key partner for Korea.”

He added that the two countries “are expanding the horizon of cooperation with countries in the region through the Act East Policy and the New Southern Policy.”

India’s Act East Policy has been pushed by the Modi government to strengthen economic engagement and strategic partnership with Asean and Northeast Asian countries.

Moon also said he attached “immense importance to cooperation with India and other South Asian countries,” pointing to his sending of special envoys to India and Asean countries immediately after he took office last May for “the first time in Korean history” to demonstrate his “strong expectations and aspirations” for the region.

“The geographical importance of the Indo-Pacific region, covering both Korea and India, is increasing day by day, and opportunities and challenges are rising at the same time,” Moon said in the interview.

Moon addressed increased security cooperation between the countries, adding, “I expect India and Korea will effectively manage regional crises and challenges together and take advantage of opportunities that arise. Stronger bilateral cooperation will greatly contribute to peaceful coexistence and mutual prosperity in the region.”

Moon went onto describe that there are “limitless possibilities for economic cooperation between our two countries,” referring to India’s cutting-edge science and technology, excellent human resources and industrial production capabilities.

“If these are combined with Korea’s applied technologies, experience and capital, it will be possible to expedite complementary and mutually beneficial economic cooperation,” he added.

Moon and first lady Kim visited the Swaminarayan Akshardham temple in New Delhi on Sunday, recognizing shared values between the two countries such as “peace, harmony and unity.”

Moon was scheduled to meet with Indian President Ram Nath Kovind on Tuesday after the bilateral summit with Prime Minister Modi.