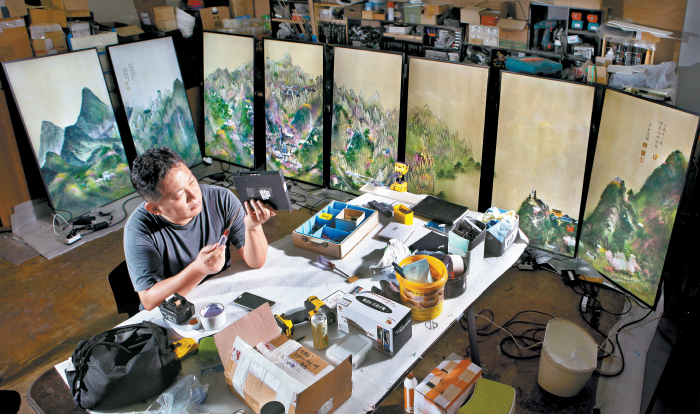 Media artist Lee Lee-Nam works on a video art piece in his studio located in Nam District, Gwangju. The work that sits behind him is the eight panel digital folding screen that was displayed at the 2018 Inter-Korean Summit exhibition on April 27. [PARK SANG-MOON]

Media artist Lee Lee-nam, 49, is an acclaimed inventor who creates innovative and aesthetic masterpieces through digital technology. By reconstructing classic Eastern and Western art masterpieces in the form of animation, Lee continuously explores the boundaries of digital art.

Although he is also a sculptor, Lee is best known for being a media artist, especially for his digital portrayal of classic masterpieces. Movement plays a vital role in his works, expressing a conversation between tradition and modernity.

His most recent work was “A Path to Peace,” which was displayed at the 2018 Inter-Korean Summit exhibition on April 27. Inspired by landscape painter Gyeomjae Jeong Seon’s (1676-1759) painting of “Danbalryeong Mangeumgang,” this eight panel digital folding screen depicts the view of Mount Geumgang from the Danbal Bridge.

This 12-minute video art piece shows mountains on opposite sides of the Korean Peninsula changing but never coming closer to each other. Moreover, it captures the desire to recover the history of the divided peninsula and how both sides work towards creating harmony.

Along with reinterpreting the beauty of this mountain, Lee uses digital technology to illustrate the seasonal transitions of the Korean peninsula. As time passes, it presents how the Korean peninsula progresses in diverse fields, including culture and architecture.

But what makes this piece so remarkable is the small details that capture how the two Koreas communicate peacefully with each other. For example, it shows the two leaders of the Korean peninsula standing next to each other at the Panmunjom Peace House.

Lee’s artistic background is heavily influenced by his childhood. Born in Damyang County, South Jeolla, in 1969, Lee grew up surrounded by bamboo trees. This region is especially beautiful in the winter, when snow slowly falls on the bamboo trees and covers the landscape. This exposure to the natural environment was extremely helpful in creating his identity as an artist. Even to this day, most of his works center on the theme of nature. 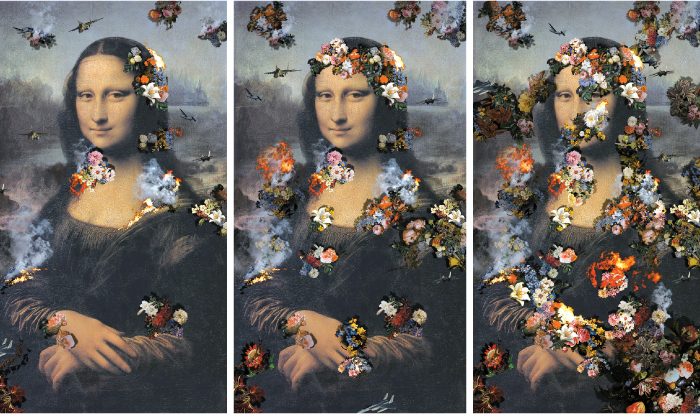 Lee’s video interpretation of Leonardo da Vinci’s famous painting “Mona Lisa” (1503). As flowers grow out of fires from bombs being dropped by airplanes, Lee sends the message that hope can grow out of times of doom. [PARK SANG-MOON]

Lee, who majored in sculpture at Chosun University in Gwangju, shifted his interest to “moving images” after graduation, especially after he began teaching animation art to students at Sunchon National University in 1997. Through watching his students work with computers, he was inspired to fuse technology with his art. He then began to learn how to draw and edit images on a computer.

His earliest animated works were mostly experimental and Lee initially did not receive that much recognition from contemporary audiences. He was merely interested in creating something out of the blue and he sought to explore the boundaries of digital art.

Nevertheless, he changed his approach as he soon realized that he was being shunned by the art community for not following their demands. He was devastated by his exclusion and searched for answers.

He found solace after reading the words of French art historian and art theorist Daniel Arasse (1944-2003). “I hope people might be able to stand in front of one masterpiece for at least five minutes,” said Arasse. For some, five minutes may not seem like a long time, but for those with limited attention spans, it might be an eternity.

After hearing this, Lee was able to accept the fact that most viewers have short attention spans. So, instead of creating works that don’t move at all, Lee decided to revive art masterpieces. He figured that regardless of whether the classic masterpieces were from Eastern or Western countries, people would be interested in viewing animated versions of the works. His guess proved to be true, as people would stand in front of Lee’s works for a long time, admiring the artwork’s movement.

One commonality in all of Lee’s works is that these classic masterpieces are communicating with each other through dynamic motion. By playing with time, he combines the past and the present. In the case of classical oriental paintings, such as landscape paintings of the Joseon Dynasty, his pieces consist of vivid colors, highlighting the depths of Chinese ink and the traces of history. For Western paintings, he mostly selects and reconstructs artworks from Impressionist and Post-Impressionist artists, such as Manet, Monet, Van Gogh and Seurat.

Before working on the computer, Lee collects visual images from newspapers, magazines and the internet. After cutting out and putting together the images, he then organizes them and places them on his walls and his desk. He does this on a regular basis because looking at these images sometimes leads to inspiration.

Compared to other digital media artists, Lee’s work has an emotional essence, which is something that cannot be easily copied. Other than content, emotional essence is what helps Lee breathe life into the art masterpieces. His artworks encompass the range of the East and the West, the past and the present and life and death.

Often dubbed as the second Nam June Paik (1932-2006), the late “father of video art,” Lee is a big fan of the deceased artist. Although Lee has also been inspired by other prominent artists, he looks up to Paik the most and has a great deal of respect for the pioneering artist. Paik’s creativity, technique, source of inspiration, philosophical background and diverse knowledge are all something that Lee looks up to.

Lee wishes to be remembered in art history as an artist who contributed many great masterpieces to an emerging field of art. Like his role model Paik, Lee desires to become a leader, continuously experimenting in the field of digital art.