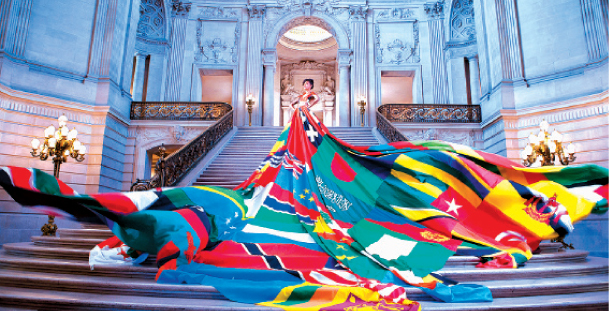 The 3.5-meter (11-foot) Amsterdam Rainbow Dress, made with the flags of 75 countries where homosexuality is punishable by law, is coming to Korea as part of the Seoul Queer Culture Festival, which starts on Friday. It will be the first time the dress made in the Netherlands will be displayed in Asia. [AMSTERDAM RAINBOW FOUNDATION]

The dress, made with 80 flags, 75 of which are countries where homosexuality is punishable by law, will be coming to Korea as part of the Seoul Queer Culture Festival, which begins on Friday. The festival is organized annually to support the LGBT community and started in the Daehangno area in 2000 with only 50 people.

Now, with more than 50,000 participants, the festival will display the dress, which was made in the Netherlands and has traveled to other countries in Europe and the United States.

This will be the first time the dress will be shown in Asia. It will be displayed from 11 a.m. to 7 p.m. on the same day that the parade around central Seoul will be held.

The parade, which starts at Seoul Plaza and continues for about four kilometers, begins in the afternoon. Anyone can join the parade and even jump up on the floats - or they can just enjoy the parade from along the route if they wish.

“In 2001, many older Koreans were angry at us, since they didn’t understand the meaning of the parade” said Kang Myung-jin, chair of the Seoul Queer Culture Festival Organizing Committee. “But now, people sometimes freely hand out water bottles and even cheer for us during the march.”

This year’s slogan, “Queeround,” was chosen through a public contest in April. It tells the public that there is “always someone queer around,” the festival organizer said in a media release.

It also means that the round for queer people is starting now.

At Seoul Plaza, there will be more than 100 booths and programs prepared by supporters, such as the Busan Queer Culture Festival and Human Rights Foundation Saram. Performances from alternative rock band Crimson Butterfly Ensemble and others will grace the main stage.

Despite the rising profile of queer Korean groups, homophobic Christian groups have interfered with the festival before. In order to prevent any violent altercations between festival participants and protesters, the Namdaemun Police Station will deploy officers near Seoul Plaza during the festival.