A journey through the glorious Baekje Dynasty : Visiting sites in Gongju, Buyeo and Iksan reveals the beauty of the kingdom

A journey through the glorious Baekje Dynasty : Visiting sites in Gongju, Buyeo and Iksan reveals the beauty of the kingdom 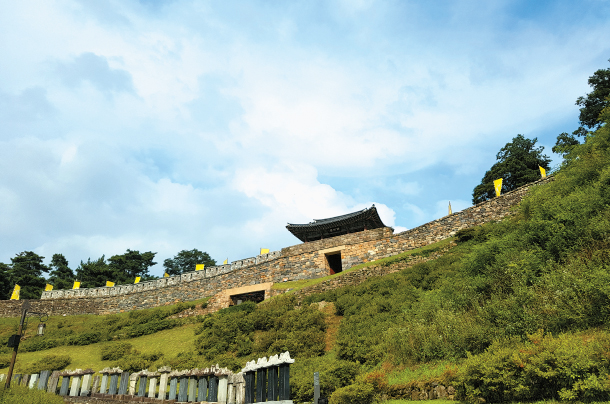 The Gongsanseong Fortress is situated in the city of Gongju, South Chungcheong. It was built to protect the then-capital city of Baekje when it moved its capital to Ungjin. [YOON SO-YEON]

The ancient Baekje Dynasty (18 B.C.-660 A.D.) rooted itself deep in the western corner of the Korean peninsula, stretching northwards beyond what sits as current-day Seoul to own the beautiful land near the Han River from 18 B.C. to 475 A.D. The kingdom saw its power fall after it had to move its capital city from Hanseong, Seoul, to Ungjin, in the year 475 when it could not fight off the expansion of Goguryeo Kingdom’s (7 B.C.-668 A.D.) King Jangsu. Baekje had to start fresh in the southern soils, which it did, and sought to begin another chapter in its history books in Sabi from the year 538 until it met its end in 660.

The history of Baekje is considered essential in textbooks, as it was one of the three kingdoms that ruled the Korean soils along with its two rivals, Goguryeo and Silla (57 B.C.-935 A.D.). Yet, contrary to how its unique culture bloomed for centuries before it met its end, Baekje seems to be overshadowed by the dynasties that followed and took over the land. To shed light on the hidden beauties of Baekje, the Cultural Heritage Administration, in collaboration with numerous organizations and regional governments, held the “Baekje Cultural Heritage Week” for the first time from July 8 until today.


The heritage administration, in conjunction with the Buyeo National Research Institute of Cultural Heritage, the National Gongju Museum, the Buyeo National Museum, the Mireuksaji National Museum, the Gongju City Government, the Buyeo County Government, the Iksan City Government and the Baekje World Heritage Center, provided a total of 26 different programs taking place at Unesco-designated world heritage sites in the southern regions of the country. Although most of the programs have ended for the summer, the Baekje Week events will be held every year starting in 2019, with even more programs for history enthusiasts. The Cultural Heritage Foundation has taken the chance to renovate old information boards at many of the historical tourist spots, as well as carrying out meaningful archaeological research, reason enough for tourists to make stops in Chungcheong and Jeolla.


Part of the week of events was a two-day Baekje tour that began in Buyeo, and then moved along to Gongju, South Chungcheong and then finished up in Iksan, North Jeolla. The tour covers six Unesco world heritage locations and other must-see spots that are worth adding to any traveler’s itinerary.


Here are the places to go to feel the powerful elegance of the Baekje culture. For those who plan to visit all the places recommended, a three-day trip is suggested, with one day for each city, as some of the heritage spots are located on mountainsides and require some time to be able to look around without getting exhausted.

In Gongju, South Chungcheong, is King Muryeong’s tomb, a replica of which can be viewed in a museum, left. The tomb, along with six others, was designated as a world heritage site by Unesco in 2015, but it is closed off to the public. A night at the Gongju Hanok Village, right, finishes off the day with a uniquely Korean experience. [YOON SO-YEON]


Ungjin is now the city of Gongju, and Sabi has become Buyeo, both of which are located in South Chungcheong.


Apart from written records, tombs - especially the tombs of kings - serve as the best sources for historians and archaeologists to learn from. The city of Gongju is home to the tomb of King Muryeong, one of the most significant findings in Korean history. Often, ancient tombs have been robbed before being excavated by archeologists, as they contain precious jewelry worth millions of won. But King Muryeong’s tomb was hidden in a mountainous landscape safe from any scavengers.


The museum located on the grounds of the Royal Tombs of Songsan-ri provides a perfect replica of the insides of the royal tombs found at the site, including King Muryeong’s tomb and six others nearby, as well as replicas of the artifacts that were found during the excavation. The tombs are closed to the public, but taking a step inside the exhibits and later walking outside to see the tombs is an experience that’s not available anywhere else. The tomb was designated a Unesco world heritage site in South Chungcheong along with the Gongsanseong Fortress.


Gongsanseong Fortress lies just a few minutes away from the tombs, circumnavigating the city of Gongju to protect the king. While 735 meters (2,411 feet) of the walls were built during the Baekje Dynasty, 1,925 meters were added later during the Joseon Dynasty (1392-1910). Therefore, the stone walls flaunt a mixture of fairly white stones that are visibly new to the eye, along with darker shades of stones that were set in place more than a millennium ago. Admission to the royal tombs costs 1,500 won ($1.32) and 1,200 won for the fortress.


For those who’d like a full traditional experience, it’s worth spending a night at the Gongju Hanok Village, which opened its doors in 2010 but is relatively lesser known than other hanok (traditional Korean house) villages around the country, such as the one in Jeonju, South Jeolla. Rooms can be booked online, with different prices for each room. For more information, visit www.hanok.gongju.go.kr.

Visitors to the Busosanseong Fortress can try a ride on a Hwangpo dotbae, or traditional yellow-flagged sailing boat, along the Geum River which surrounds Mount Buso, left. The Jeongnim Temple Site, middle, has a five-story stone pagoda and a restored version of the main hall. At right is the real gilt-bronze Incense Burner of Baekje, which is listed as National Treasure No. 287. [YOON SO-YEON]

King Seong sought to bring Baekje back to its former glory in the year 538 and moved the capital to current-day Buyeo, which was geographically more stable and also larger than Gongju. Buyeo sits right next to the Geum River, which worked as a great waterway for the country to come in contact with other countries such as China and Japan, creating the unique, multi-cultural influences we see in Baekje today.


The biggest site to see in Buyeo starts with Busosanseong Fortress located in the village of Gwanbuk, along with the some 650 square meters of palace remains. The fortress is assumed to be where the royal palace had been built, based on the foundation stones, fortress walls and artifacts found nearby that point to the existence of a royal palace, even though no actual structures of the building had been found.


“The artifacts and remnants of Baekje tend to be buried in the ground, as much of it was damaged when Baekje fell to the Tang and Silla alliance in 660,” said Kim Gi-suk of Buyeo County’s tourism team.


The archaeological site is also listed as a Unesco world heritage site, as it provided an immense amount of archaeological findings. Mount Buso is also home to the famous Nakhwa Cliff, where a total of 3,000 servants are said to have jumped off of after hearing the news of the kingdom falling into the hands of the Tang and Silla alliance. A boat ride on the Hwangpo dotbae, or a traditional yellow-flagged sailing boat, along the Geum River allows a full view of the mountain and the cliff.


The boat takes off at Goran Temple and stops at Gudeurae, a 5-minute car ride from the Buyeo National Museum. The museum started off as the Buyeo branch of the National Museum of Korea in 1945, but then opened its doors as the Buyeo National Museum in 1975 in a building designed by the prestigious architect Kim Swoo-geun. Among the artifacts on display are the gilt-bronze Incense Burner of Baekje, which is listed as National Treasure No. 287, and the gilt-bronze Avalokitesvara, listed as National Treasure No. 293. Both are original artifacts owned by the museum, while the artifacts on display in Seoul are replicas.


The Buyeo course ends with a visit to the Jeongnim Temple Site, the biggest temple of Baekje’s Sabi period. The site shows the typical temple layout of the Baekje period, consisting of a central gate, a stone pagoda, a prayer hall and a lecture hall which all stand in a straight line from south to north, surrounded by linking corridors. The five-story pagoda, which is listed as National Treasure No. 9, is one of the only two surviving pagodas from the Baekje period, which is presumed to have been built at around the seventh century.

Left, a stone pagoda stands to greet visitors to the Wanggung-ri Site, which is said to have housed the royal family during the reign of King Mu of Baekje. Middle, one of the Ssangneung, or the twin tomb, is going through excavation for research. Right, the Mireuk Temple’s west stone pagoda is the oldest surviving stone pagoda in Asia. [YOON SO-YEON]

Although no written records pin down if or when Baekje moved its capital to Iksan, the city houses royal palace remains, proving its status either as a secondary city that worked to aide the capital Sabi, or as an actual capital city. Anyhow, the remnants of Baekje in Iksan - a palace, a temple and tombs - point to the fact that Iksan was a important city to the kingdom, as explained by researcher Lee Shin-hyo of the Wanggung-ri Site Museum.

“There’s a royal palace because this was a royal city,” said Lee. “We don’t really focus on the recordings, but assume that the kingdom moved to Iksan during the reign of King Mu based on the fact the remnants such as the palace grounds and royal tombs tell that story.”

The building site in the village of Wanggung is an impressive 6,862 square meters. It was initially built as a palace, but was instead used as a temple during the Unified Silla period (668-935). Aside from the stone pagoda, remains of what used to be the palace gardens and waterways are still visible, with stones decorated to look like small mountain ranges and waterways circling the palace place for both aesthetic reasons and to function as a means to store water.

The Wanggung-ri Site is one of the two biggest Baekje remains in Korea, along with the Mireuk Temple Site, also in Iksan. The temple site is said to have been built during King Mu’s reign, when his queen dreamt of three Maitreya Buddhas walking into the pond that sits inside the current-day site. Three stone pagodas are said to have been built, with the whole temple site stretching over 13.4 million square meters, making it the largest temple in Korea. Among the three pagodas, the western pagoda is the only one left standing. The renovation of the pagoda took over 20 years and ended in June of this year. The pagoda is the oldest standing stone pagoda in Asia.

The Ssangneung, or the twin tomb, is where King Mu is said to have been laid to rest in the myths. It is currently undergoing an excavation that started last year. Human bones were found in April and the results of testing are set to be released next week. The Cultural Heritage Administration will discuss whether to open the tomb sites to the public.

The Baekje tour ends at Seokbul Temple, where the Yeondong-ri Seated Stone Buddha is housed. Although it’s not entirely unique to have a stone Buddha inside a temple, the Yeondong-ri Buddha is the biggest and oldest free-standing stone Buddha in Korea. It’s known as the “Sweating Buddha” because the Buddha supposedly sweats prior to major national disasters, such as the breakout of the Korean War on June 25, 1950 and the Sewol Ferry disaster in 2014, but no evidence backs this up.