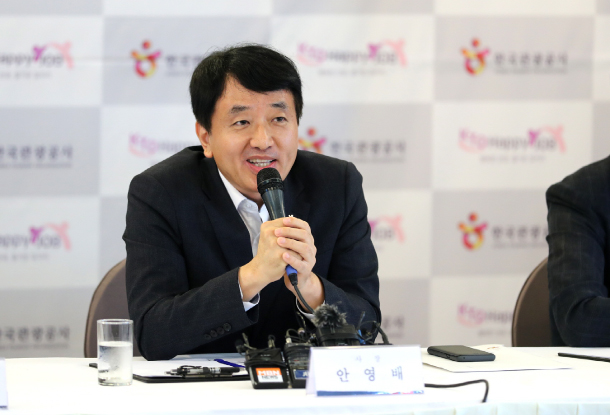 The new president of the Korea Tourism Organization (KTO), Ahn Young-bae, speaks during his first press conference at the KTO Press Center in central Seoul on Monday. [KOREA TOURISM ORGANIZATION]

With summer vacation season in full swing, Koreans who haven’t yet planned their trips are looking for new locations to explore and take a rest. Many travel abroad or head south to seaside locales like Busan or Jeju in search of a place to cool off. But why not look north?

Attracting both local and foreign travelers to lesser-known mountains and rivers across the peninsula is one of the goals of the Korea Tourism Organization under its newly appointed president Ahn Young-bae.

In the spirit of easing tensions between North and South Korea, Ahn plans to set up a team that will focus on promoting travel throughout both countries.

“If the relationship between the South and North [improves], ‘peace travel’ will really start to take off,” said Ahn during his first press conference, adding that this is one way to develop unique tour programs that can appeal to many travelers.

To develop new ideas to make the tourism industry in Korea more sustainable, Ahn also plans to set up a new tourism big data center. Here, he said, one can find out which areas are becoming popular vacation spots and what travelers are purchasing during their time away from home so that the travel industry can set up better marketing strategies. While a future management team, another initiative Ahn plans to start, will focus on how to make such changes, a value management team will conduct research based on the data and present their findings to the organization.

He also pointed out that the staff of the state-run organization, whose job it is to make domestic travel more appealing, have not shown initiatives in using their own vacation days. All executives and team managers will be required to take a two-week vacation so that employees won’t feel awkward about requesting to use their vacation days.

He also touched on the problems of local tourism, such as the struggles that come from relying on visitors from nearby countries like China or Japan, as well as low-quality package deals.

“Politics need to be [resolved] first in order to talk more about how to better cater to Chinese travelers, but in the meantime, we will try to diversify the profiles of international travelers coming to Korea,” said Ahn.

“We will also focus on improving the overall quality of the travel packages to tackle the issue of low-budget, low-quality trips, but this doesn’t mean that the overall cost of travel packages are going up because there is some need for more affordable trips.”