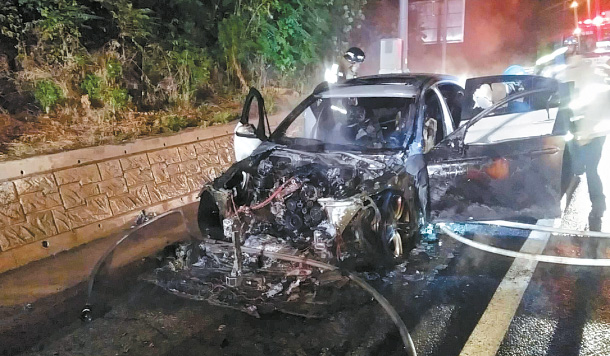 A BMW 520d caught fire while driving on a highway in Chuncheon, Gangwon on Sunday. The fire was extinguished in 20 minutes and no one was hurt. [YONHAP]

Another BMW 520d sedan caught fire while driving on a highway in Wonju, Gangwon on Sunday morning.

The fire, which did not result in any casualties, came just three days after the Korean unit of the German premium carmaker announced it would voluntarily recall 106,317 units of the 520d and 41 other models produced between March 2011 and November 2016.

Lee, the 44-year-old owner of the car, was quoted by the Wonju fire station as saying, “I noticed an alarm light on the dashboard. Immediately after I pulled over onto the shoulder the vehicle burst into flames.”

Lee avoided injury because he was able to immediately leave the vehicle.

At the time of the incident Lee was on the Central Highway toward Chuncheon, Gangwon. The fire was extinguished in 20 minutes by firemen and the local police station and fire station are investigating the cause of the accident.

The BMW 520d is one of the best-selling import models in Korea and BMW is the second largest import car brand here, in a large part due to the popularity of the 5 series. The specific segment sold over 16,000 units in the first half in Korea.

However, over 20 520ds have been reported to have caught fire since last December and some drivers have gone so far as to buy a fire extinguisher to install in their vehicle.

The Ministry of Land, Infrastructure and Transport announced Thursday that BMW Korea will administer the recall. The carmaker cited a faulty component called the exhaust gas recirculation, or EGR, as the cause.

But the reason the malfunction has taken place so frequently in Korea is as yet unknown. Some experts point to the ongoing heat wave as the potential trigger.

There have been several BMW recalls in other countries due to a risk of vehicles catching fire, including in Britain earlier this year and in North America last year. Korea is the only country where the cars were recalled due to faulty EGR modules.

The recall is set to start on Aug. 20 after BMW Korea is stocked with enough replacement parts. The company began offering emergency inspections Friday at four official dealerships for owners who want immediate checkups on their vehicles.