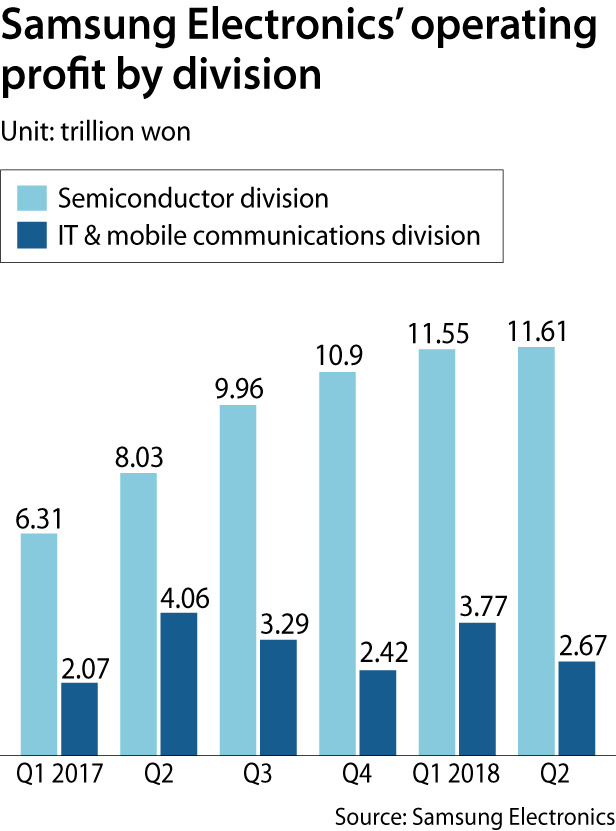 Samsung Electronics’ growth momentum stalled in the second quarter as the lackluster performance of its smartphone and display divisions dragged results down. Bucking the trend, the semiconductor sector posted record highs in both revenue and operating profit.

The tech giant reported Tuesday that its operating profit for the April-June period was 14.87 trillion won ($13.27 billion), up 5.7 percent from the same period a year ago but down 4.9 percent from the previous quarter. Revenue for the second quarter tallied 58.48 trillion won, down 4.1 percent on year and 3.4 percent on quarter.

“Memory chips continued their strong performance throughout the second quarter whereas sales in smartphones and displays declined,” Samsung said in an earnings report.

The operating profit for the chip division accounted for 78.1 percent of the entire pie, trailed by the IT and Mobile Communications division at 17.9 percent.

Samsung attributed the record-breaking performance to higher demand for chips for expanding data centers or cloud services and a trend for electronic devices like smartphones with a larger storage capacity.

Samsung came out with a rosy outlook on the product sector in the second half, citing anticipation of continuing demand regarding server expansion and the release of new smartphones that are to use its chips.

But earnings in the IT and mobile communications (IM) division tell a different story. The sector generated a mere 2.67 trillion won in operating profit, tumbling 34.2 percent on year. Revenue was also down 20 percent year on year to 24 trillion won. Disappointing sales of Samsung’s flagship Galaxy S9 smartphones were largely to blame.

According to analysts, the S9 ended up selling up to 9.5 million units, far below the initial projection of 15 million. Its sales record is expected to be the lowest since the S3 in 2012.

A rise in costs for marketing new models also dealt a blow, the company said.

“The year’s second half is generally a peak season so smartphone and tablet demand is expected to go up,” Samsung said. “But with a score of new releases reserved for launch and fiercer competition in function and price, the business environment continues to remain difficult.”

The consumer electronics division posted an operating profit of 510 billion won in the second quarter, up 45.7 percent on year, on the back of robust sales of expensive OLED TVs and other premium home appliances.

The chip business has been keeping Samsung’s revenue high at a time where the smartphone business isn’t making as much as a decade ago. Behind the achievement is the company’s past investments, as well as a super cycle in the chip industry that drove profits across the sector.

Samsung is also hoping to turnaround its mobile communications business with new models coming later this year, starting with the Galaxy Note9 phablet, set to be unveiled on Aug. 9.

Lee Kyung-tae, a managing director at the IM division, said in a conference call Tuesday that the Note9 will “have a reasonable price with mainly core functions” and is expected to sell better than the previous model in the series.

“It’s a [completely] new product so there are several difficulties - we’re in the stage of making improvements towards completion,” he said. “The development requires research not only in the display, but the battery, case and used materials. There also needs to be an accumulated scenario of user experience, so we’ve been working on it for years.”

Samsung’s outlook on this year’s second half is upbeat. Some analysts predict the company’s operating profit for the next quarter may reach 17 trillion won on the back of continuing demand for semiconductors throughout the year.