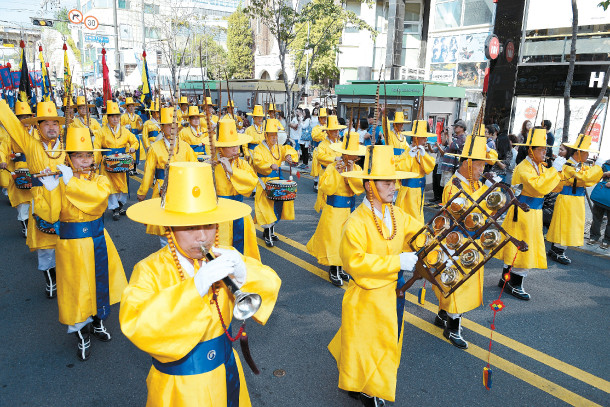 The 2015 parade of Joseon Tongsinsa during the Korea Japan Festival will be once again reproduced for the 2018 edition of the event at Coex on Sept. 9. [KOREA JAPAN FESTIVAL]

A chance to see what’s hot right now in both Korea and Japan comes to Coex, southern Seoul, on Sept. 9. The 2018 Korea Japan Festival in Seoul, featuring a variety of groups offering modern and traditional entertainment will gather to show how the two countries are active in cultural exchange.

The festival, first established in 2005, when the two countries commemorated the 40th anniversary of the normalization of diplomatic relations, is celebrating its 14th edition this year.

To remember how the two countries continued cultural exchange despite diplomatic difficulties in the past, the festival once again decided to reproduce the parade of the Joseon Tongsinsa, diplomatic envoys sent to Japan during the Joseon Dynasty (1392-1910).

Shim Kyu-sun, an organizing committee member, explained at a press conference on Thursday that such goodwill missions were the result of both countries trying to concede to each other a little bit, which could set an example for how each country could improve their relationship today. He said the Joseon Tongsinsa - which traveled from Hanseong, the former name of Seoul, to Edo, the former name of Tokyo - were a large collection of cultural envoys that included artists, dancers, calligraphers and chefs. The parade at the festival will include about 74 performers marching around the venue and is organized to commemorate the registration of Joseon Tongsinsa documents to the Memory of the World list by Unesco last year.

Of course, tasting local delights should never be missed. To give locals a taste of the liquor of Japan, there will be tasting sessions of Japanese sake throughout the day. There will be about 10 different choices ready for visitors. To compare, some Korean liquors will be available as well.

The 2018 Korea Japan Festival, an event started to celebrate the 40th anniversary of the normalization of the relationship between the two countries, will feature a variety of performances from Japan and Korea to continue a history of cultural exchange. Traditional arts groups like Kikakuya, left, and Wasabi, right, are set to perform. [KOREA JAPAN FESTIVAL]

Entertainers from both countries will make the one-day event more exciting. Korean pop stars including Momoland will perform at the event, right before it continues promoting its music in Japan next month. Japanese pop group FlowBack will have performances, while Japanese performing group Wasabi will present the sound of music played by traditional Japanese instruments. Many other performances will continue throughout the day to keep visitors entertained with things to enjoy.

To wrap up the event with more Korean style, volunteers at the festival will carry cheongsachorong, a traditional Korean lantern adorned with red and blue silk shades with a candle inside, around the venue. Teams that offer traditional style performances from Japan and Korea will take turns filling the venue with music.

After the festival is held in Seoul, Tokyo will host an event with the same title to continue the cultural exchange between the two countries. The event in Tokyo will be two days long, from Sept. 22 in Hibiya Park.