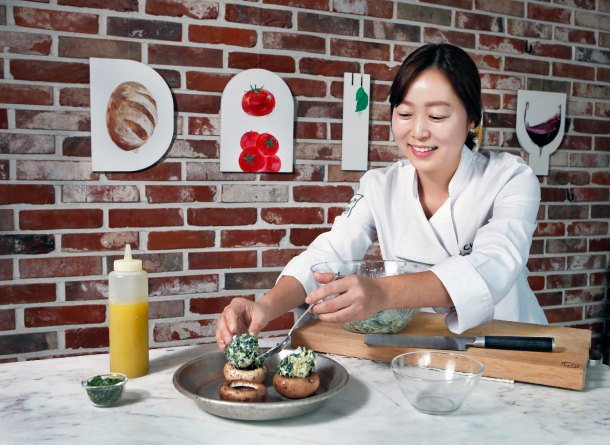 Chef Daisy Park of Italian restaurant Galina Daisy in Tongin-dong, central Seoul, above, plates a dish in her kitchen. At left are some of the dishes she serves at the restaurant that she has been running since 2014. [PARK SANG-MOON]

Chef Daisy Park of Italian restaurant Gallina Daisy is more focused on maintaining Italian sentiment than on Italian cooking techniques or imported ingredients when it comes to running her own restaurant. To make sure her food reminds guests of a plate of pasta served in a one-story Italian home with a terrace overlooking a vast vineyard, she tries to remember an ambience specific to Italian culture. She has visited Italy at least once a year since getting more serious about Italian cuisine. 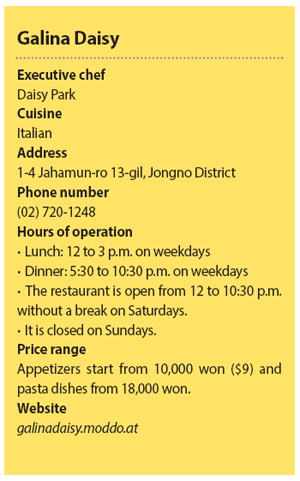 “Each time I go, I’m reminded of [true] Italian food and culture so that I won’t get swayed by the hot trends in Korea or any other elements trying to change the style I developed,” said Park. “I don’t need to find something new all the time. I’m more interested in going for the very basic taste of ingredients, because I want my guests to come back and say ‘I came back to eat the usual dish I eat at Daisy’s place.’”

She goes to a market every time she travels to Italy, most recently to Sardinia, because the market is where she gets all the information she needs. She checks out what’s available and how nearby restaurants use the ingredients in their dishes. The regions she chooses are different each visit, as she also wants to check out farms and merchants who could provide products to her restaurant in Seoul. She learns how to better serve the cheese or truffles she uses and also meets with merchants and farmers to suggest ideas for new products. She thinks those experiences are much more valuable than hitting up big name restaurants all over the world.

“It’s all about what I care for, and what I intend to experience,” said Park. “The more I experience things, I sense that my taste and my style start to develop, [and could avoid being] influenced by what’s ‘trendy’ at the moment.”

She explains that she’s not someone who follows trends. She is not very good at multi-tasking and doesn’t even know what functions her phone has besides simple voice calls and text messaging. But this has helped her stay focused on the few things she has done, such as working at the same restaurant for close to a decade.

“Many have told me that I should be better paid at a different job or I, with my level of experience, should be doing something else, but that never was so important for me because I wanted to continue [by myself]. I have my own identity I can confidently call my cooking style,” said Park. “Some might say I’m stubborn, but I think my forte is that I continue no matter what.”

She started her career in cooking Italian at Sortino’s in Hannam-dong, central Seoul, and served as an executive sous chef and a founding member of Italian restaurant Grano in Gangnam District, southern Seoul, while working for Italian chef Santino Sortino for about nine years. There, she was certain that she wanted to learn what she liked and disliked, and picked which direction she wanted to go in to build her future as a chef. 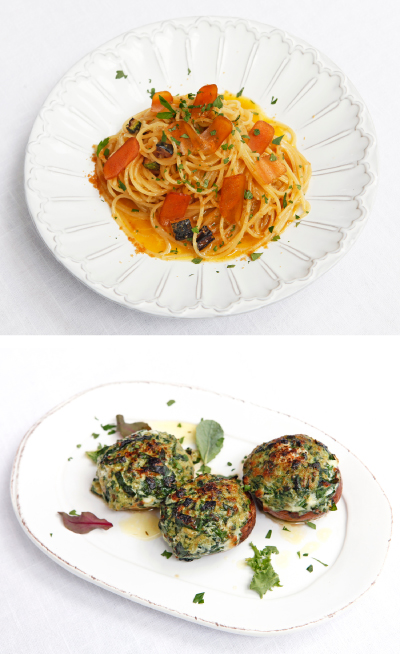 She used her experience while choosing the location of her first restaurant which opened in 2014. Her experience of never having lived in an apartment led her to find a spot in the Seochon area of central Seoul’s Jongno District where she could have a small garden.

She found a residential home built in the 1950s and transformed it into a multiple-story restaurant with a rooftop and a small garden-like entry way to the main door. As the restaurant would be where she and her staff will work everyday, she wanted her work place to be in an area she finds fun to walk around and where she can enjoy the view of the sky along with the mountains. To make the restaurant feel more like another home in the neighborhood, she used props like giwa, traditional style roof tiles, to decorate the walls.

Now that she’s confident her first-ever restaurant is running smoothly with a system run by experienced staff, she’s exploring a new opportunity to branch out. She has been considering having a more casual place for food and drinks, and the concept may become a reality in southern Seoul.

“Over the past five years, I have tried to perfect what I did for the previous eight years so that I can take on another challenge,” said Park, adding that if she opens a new eatery, it will be a place where small portions of simple Italian dishes are served with drinks. “The main body has to be sturdy so that the tree can have many branches and twigs in the future.”

Although all the plans she has revolve around Italian cooking, she doesn’t think that she will only stick to Italian cuisine. She could also branch out to cooking Korean food, as her mother has been part of a local group in North Gyeongsang trying to hand down the local food there to the next generation and also runs a reservation-only restaurant right next to her home and garden.

“Not all the branches and twigs I will grow in the future will be Italian,” said Park. “I’m Korean, what I eat often is Korean food, so I will take slow steps later to maybe make something other than Italian cuisine.”