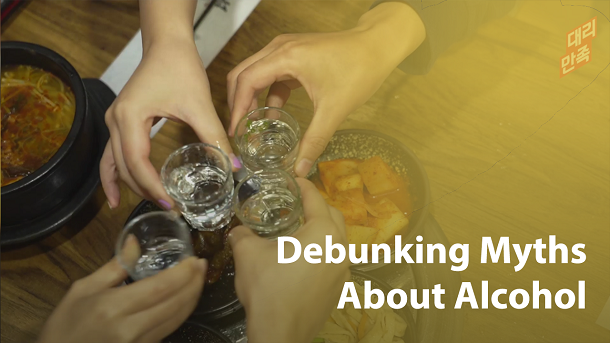 1) The following contains scenes of alcohol consumption. Those under 19 are asked not to copy what they see.

2) If you drink often, does your alcohol tolerance really increase?

3) Must know facts about alcohol.

4) Does tolerance really increase if we drink more often?

5) Yes, but only slightly. Your increased alcohol tolerance is actually your brain adapting to the alcohol’s effects.

6) Frequent drinkers get less drunk because of their brain’s immunity. Their physical capacity to digest alcohol remains the same.

7) That doesn’t mean you should drink more to raise your tolerance. It’s still bad for your health.

8) Is it true that if you drink hot soju the effects are stronger?

9) Not likely. Liquids evaporate at 100 degrees Celsius (212 Fahrenheit). Alcohol, at about 78 degrees Celsius. If we heat liquor up, the alcohol evaporates and it becomes softer.

10) Alcohols like sake are consumed hot for cultural reasons. It’s not true that people get more drunk if they drink hot liquor.

11) Is alcohol an effective hangover cure?

13) You might feel better when you drink during a hangover.

14) But that’s because drinking has just dulled the hangover symptoms.

15) You shouldn’t drink during hangovers.

16) Can we use willpower to stay sober when we drink with someone we’re not comfortable around?

17) There is no such thing as willpower when it comes to alcohol tolerance. That idea comes from military drinking culture.

18) Those people just have a high alcohol tolerance. It doesn’t mean they have stronger willpower.

19) We’re all born with a different capacity for tolerating alcohol.

20) The amount of alcohol a person can process in their lifetime is limited.

21) When you exceed that amount you’ll start causing brain damage, regardless of your willpower.

22) Helpful tips.
Bonus: What foods are good for hangovers?

26) Then they drink cold water again, and then they throw up again.