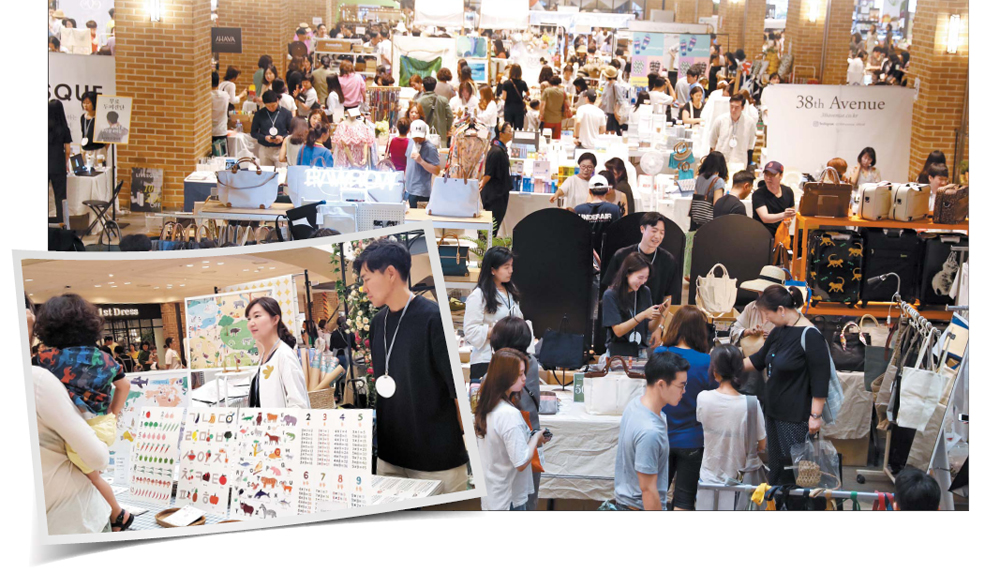 Ddinggul Market is one of the most popular markets in the country. At the market, shoppers can get their hands on household goods from small and unique brands that are not easy to find elsewhere. The market opens at different times and in different places each session. [DDINGGUL MARKET]

Nobody knows where or when the doors open, but when they finally do, tens of thousands of visitors show up, an incredible spectacle for an event that doesn’t advertise itself. People, with bags in hand, line up to get their hands on what’s inside. Just what are they all waiting for? A weekend market.

It may seem rather peculiar to say that markets have become popular once again, since markets have been prevalent across Korea for decades. Traditional markets still attract tourists and regular visitors throughout the year, flea markets are a haven for antique-lovers and collectors, while the most ubiquitous market - the supermarket - keeps our kitchen shelves nice and full.

The markets that have become popular recently are similar to what are known as three-day or five-day markets and usually open once a month or so. But with so many markets opening up recently, you never know when and where the next one will pop up. When organizers announce a date and location for the next market, only then can vendors sign up to get a booth of their own.

When a market opens, usually for a day or two on the weekends, the head count starts with at least 5,000, and frequently goes up to 20,000 or 30,000. Most of the people who show up are women in their 20s to 40s. The demographic reflects the array of items that are available at the market, which are mostly household products for the kitchen, living room, bathroom and bedroom.

From left: The Korea Craft and Design Foundation and Market Ooom held a market together at Seoul Culture Station 284 in May. A merchant holds up fresh produce from his farm at Marche, where most of the vendors sell food and groceries [KCDF,MARCHE]

On the treasure hunt

Unlike the flea markets that were seemingly everywhere in the early 2000s, and filled with cheap, secondhand items, markets these days aren’t about the price, but the quality of the things that are being sold. The vendors that come to the markets are usually small business owners dedicated to offering something that you’ve never seen before, or something that you may be familiar with, but much better. From food, small furniture to household decorations, these markets aren’t just a place where you go and buy what you need, but a place for you to enrich your lifestyle.

“There are a lot of brands that I can’t find anywhere else,” said Shin A-reum, a 34-year-old mother of a four-year-old son. “These brands are really practical. They offer trustworthy food, and also it’s really fun here. The markets have different vibes for different places, and so I visit often like I’m on a picnic.” For Shin, food brands like Mallaengi Yeosa (Miss Dried Food), Maison De Yul and Country Girl’s Right Food are treasures that she discovered during her frequent visit to the markets. Each brand sells quality food suitable for both her and her son.

There are some names that stand out even among popular markets: Ddinggul Market and Market Ooom are organized by individuals rather than a big company, and Bobusang Market was formed by a group of small business owners who came together to create a space for them to sell their wares. Other well-known markets include Marche, where farmers bring the produce they’ve grown and picked themselves, the Munhori River Market, at which artists residing in the Yangpyeong County, Gyeonggi, region can display their handiwork and Golmok Market in Jeju Island run by Playce Camp Jeju Hotel.

Behind what’s currently considered the biggest market in Korea, the Ddinggul Market, is Ddinggul Manim (Madam Ddinggul) Lee Hye-sun, who’s referred to as the Korean queen of households or a professional housewife by her fans. It’s surprising that a single person can be behind this hot trend, but Lee definitely embodies the lifestyle. On her blog, she shared stories of her life with her family and became hugely popular. Since starting her Naver blog in 2007, she had attracted over 125,000 followers. After being asked nearly everyday by her fans and followers where she got her pretty props from, she decided that she wanted to open a market for consumers and vendors to come together in one place. So in September 2015, she began with 25 brands that she used often, and opened up her first very own market.

What started as a small market of 25 brands grew eight times within three years, with some 200 brands participating this year. The market, being held in Busan from Friday to Saturday, is the 18th of its kind.

Over the years, the brands at the market have also grown. Eungok Doma by wood craftsman Lee Gyu-seok now sells wooden chopping boards under its very own brand name, thanks to Madam Ddinggul, and so does Mommy’s Pot, which sells cast-iron kitchenware, and Hwasoban, which sells modern ceramic plates.

Market Ooom’s beginnings were even more humble. In 2015, Son Ji-min started the prototype of what would later blossom into Market Ooom, where she recently hosted nine tents along Gijang Beach in Busan. With a friend who makes great curry, strawberries picked from her friend’s garden and antiques from her own collections, all Son did was have fun with her friends. But as word got out, she started receiving requests from all over the place, turning her into the large-scale market organizer she is today. She focuses on bringing in crafts and foods made by local master artisans, like Jang’s Natural Furniture, Sunshine Papa and Iroum.

Market Ooom is on its way to creating something new again. In July, it launched Dongchoon Market with fashion brand Sejung, creating a lifestyle select shop for vendors who participated in Market Ooom to have a venue to sell their goods to a bigger audience. Ddinggul Market will be opening an offline market in Seongsu-dong, eastern Seoul, and Euljiro, central Seoul, in October, in a joint effort with restaurant company OTD Corporation.

As crucial as it is for a market to carry quality goods in order to succeed, what makes these markets special is that it’s not only fun for visitors, but also for vendors as well. There’s a little something for everyone who becomes a part of the festivities.

For the vendors, the market isn’t just a place where they come to sell their stuff. It’s also a place for them to buy things for themselves, and enjoy talking to other small business owners.

“I take the time to look around in between selling my stuff,” said Eom Sun-hee, president of Mommy’s Pot. “I usually buy snacks or other things for the baby, and I end up buying too much.”

“The fun of the market comes from meeting with the customers and communicating,” added Yang A-hyun, who runs Country Girl’s Right Food. Vendors who fail to sell all the things they’ve brought within the time given to them offer large discounts at the end of the day or just trade with other vendors who also have leftovers. Knowing this, frequent visitors intentionally come late, to catch the last minute sales.

As for the visitors, markets are the best place for them to find quality brands all in one place. Every brand is carefully selected by the trendiest curators, like Madam Ddinggul herself, and customers find themselves opening their wallets because they trust the tastes of the market organizers.

“When products have been curated by the organizers, whose taste has been recognized by others, then they are seen as high-quality,” said trend analyst Kim Yong-sub.

The market is also a chance for craftsmen and small business owners to meet with their customers, because it can be very hard for them to get out into department stores that charge them a high commission fees. Maison De Yul started with just 200 bottles of home-made sauce, but now it’s got its own brand an online store and a factory. Other brands have also experienced similar opportunities.

“It goes very well with the recent trend, in which consumption is focused on one’s household,” said Lee Hyang-eun, a professor at the department of service design engineering at Sungshin University. “The experience provided by these markets is fun, and comes across as not at all burdensome for people to enjoy.”

“More people now enjoy the market as a place of fun and entertainment, like a playground,” said analyst Kim.