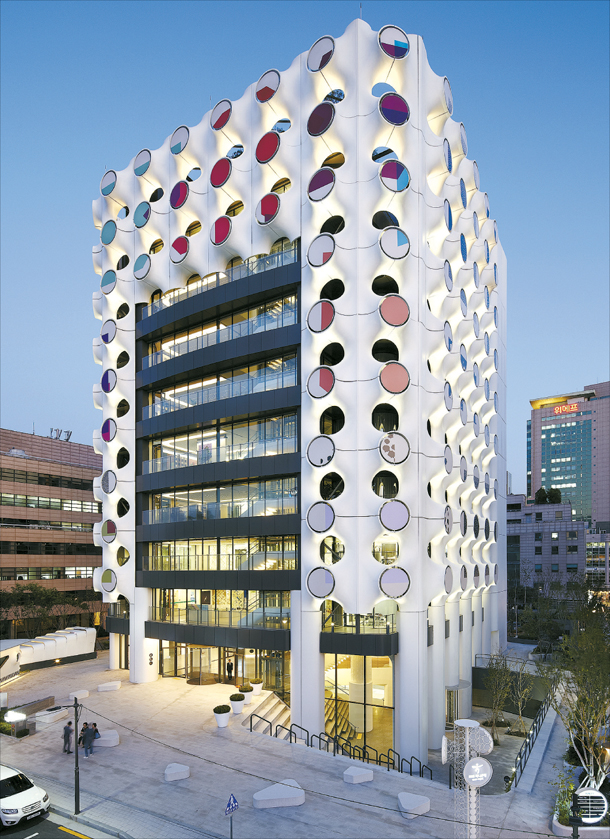 The 1997 opening of the Guggenheim Museum Bilbao in Bilbao, Spain, breathed new life into a tired industrial town, attracting millions of tourists and revitalizing the city. Bibao’s success served as a template for innovative architecture around the world, with struggling cities banking on fantastically designed structures that are as functional as they are beautiful to revitalize local economies.

Although different cities’ regulatory environments and the drive to be innovative can make it difficult for architects to come up with workable ideas, every now and then a designer comes up with a new approach that stands out from the pack.

The city government recognized the modern design of Place 1, including the remodeling of existing facilities to make them more eco-friendly.

As well as Place 1, Sopoongil Community, a community center in Nowon District, northeastern Seoul, was one of three joint winners in the First Prize category. 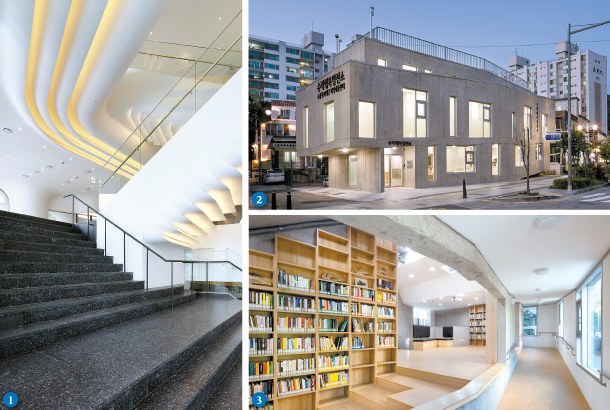 1. The ceiling has different layers for non-direct lighting. 2. Sopoongil Community in Nowon District, northeastern Seoul, is a community center with a huge ramp that connects the first floor to the third. 3. The view of a book cafe inside the Sopoongil Community. [YOON JOON-HWAN , KIM YONG-KWAN]

Place 1 certainly makes a statement. The building is covered in an undulating white skin with regular protrusions that are reminiscent of an octopus’ suckers. The otherworldly structure looks like a huge sea squirt or some sort of organic alien structure that has landed in the middle of Gangnam.

In fact, Place 1’s origins are rather more mundane. Before its funky makeover, it was nothing more than a dull rectangular building that served as the bank’s calculation center. After a year and a half of remodeling, the structure was reborn as a “culture bank,” KEB Hana Bank’s first attempt to reimagine its offline banking facilities as more customers turn to its online services.

The bank is trying to make its redesigned building a hub for cultural experiences, as well as an effective office for workers who spend many hours of the day inside the building.

Architect Kim Chan-joong of architecture company The_System Lab, who was in charge of giving new life to the building, said that making the space comfortable for bank employees was crucial, even though he was technically hired to add new facilities and uses to the existing space.

The architect persuaded the bank that all floors of the building should have a wrap-around balcony so that employees could enjoy the fresh air. The balconies are not completely open, but covered with the white cephalopodic skin, giving the building a double-layer of walls.

The structure was originally designed to protect the balconies from sun and rain, but the architect decided to have a bit more fun with the idea, making it more than just a functional protective layer by adding the undulating protrusions.

“Through such windows that are deep from the surface, the sunlight sheds nicely and lightly into the inside allowing the building to benefit from reduced energy bills,” said Kim.

“With the ‘art discs,’ we wanted the building itself to become an artwork.”

The discs will be changed every two years. The used discs will be sent to 178 different major branches of KEB Hana bank across the country so that they can represent the new “culture bank” concept in order to let people learn about the bank’s new direction.

In total, the thick outer skin plays three roles - it protects the balconies that employees can relax on, cuts energy costs and acts as a piece of artwork for the enjoyment of passersby in the neighborhood.

To create the surface of the building, the construction company took on the challenge of being the first builder to attempt such an innovative design in Korea. The embossed layer of the building is made with ultra-high performance concrete (UHPC) without the support of a reinforcing steel frame. The UHPC skin was made at a factory and then moved to the construction site to be put together.

“UHPC is more expensive than ordinary concrete, but it is highly strengthened to act as a structure without any rebar and it is thin enough for us to shape it however we want,” said Kim.

As this was the first time this construction material has been used in Korea, putting together the skin was no easy task. A lot of trial and error went into the finished product - at times it wasn’t strong enough, the surface wasn’t smooth enough or it broke when construction workers tried to assemble it on site

Just when the architect, the bank, and the construction workers were all getting close to giving up on the UHPC, their fifth attempt finally brought the results they needed.

“If concrete that is as thin as cloth can be made whilst still so strong, that will really create a big change in the construction industry here,” said Kim. “So I wanted to pave the road.”

While it was the innovative material that caused problems for the designers of Place 1, at Sopoongil Community in Nowon District the problem was the regulations.

Standing at the entrance to Mount Surak in Sangye-dong, Nowon District, the new three-story community center makes for a slightly strange sight.

Although at first glance the building looks like any other modern concrete structure, visitors will quickly notice that it looks like the floors inside are tilted.

The mystery is solved once visitors walk inside. The building employs a large serpentine ramp that allows easy access for disabled people inside the building.

The ramp is about 1.2 meters wide and 95 meters long. The building was designed to be a community center to have many different facilities like a childcare center, library, cafe, concert hall and office space. The area is quite small, about 296 square meters, but the space allotted to the ramp seems surprisingly large.

The disproportionately large ramp is actually a way for the building to avoid a regulatory nightmare. By law, public buildings that are more than two stories have to have an elevator, but cramming one into such a small space severely limited how much room there was left for all the facilities locals had requested.

The solution? Build it three-stories high, but with a huge winding ramp that transports visitors all the way from the first to the third floor, effectively ensuring that no floor space is lost, according to Principal Architects Shin Chang-hoon and Jang Yoon-Gyoo of Unsangdong Architects Cooperation.

“The wall can be used as a gallery, and the ramp can be a playground for curious children,” said the architects. “What could have been a legal nightmare has become a design element.”

Thanks to the ramp, the building very effectively uses almost all of its area. Some members of the Seoul Metropolitan Government’s review board for the Seoul Architecture Award said that the architects and construction workers were the real “experts” in making the best use of all legal regulations and restrictions.

The inside of the building has become a labyrinth. The use of the ramp instead of staircases and elevators has allowed the architects to add spaces at different heights throughout the building, known as skip floors.

Some of the steps on the side of the ramp are covered in cushions so that visitors can use them as seats to stop and chat with one another, a space that locals can use to mingle.

The overall layout is now praised for using every corner effectively, but the construction wasn’t easy to pull off, as a huge amount of the building’s floor space is not entirely flat. The construction was initially expected to be finished within 10 months, but it eventually took about one year and a half.