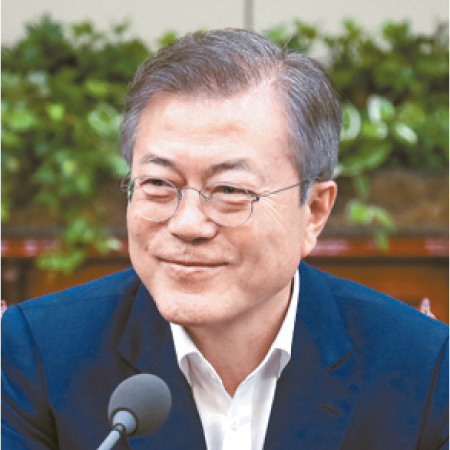 South Korean President Moon Jae-in said his goal is to make “irreversible progress by the end of the year” toward denuclearization and a permanent peace on the Korean Peninsula in an interview on Friday.

A tangible step in that direction would be a formal declaration to end the 1950-53 Korean War, which ended with an armistice agreement, not a peace treaty, Moon told Indonesia’s Kompas newspaper in a written interview published two days after his special envoy returned from a trip to Pyongyang and met with North Korean leader Kim Jong-un.

Moon cited the inter-Korean Panmunjom Declaration of April 27 summit and the North-U.S. joint statement of June 12, and noted that North Korean leader Kim and U.S. President Donald Trump “confirmed their joint goals of complete denuclearization on the Korean Peninsula and the settlement of permanent peace.”

But Moon said “sincere implementation” of the agreements was required, stressing the importance of “building trust between related countries,” and added that the plan is “to make enough progress by the end of the year so that it cannot be reversed.”

He added, “A declaration to end the war within this year, which marks the 65th anniversary of the end of war, would be desirable as a substantive step toward building trust and end hostile relations on the Korean Peninsula.”

Kim also told Chung Eui-yong, the special envoy and the Blue House national security adviser, that if the goodwill measures it has been taking are met with “corresponding measures,” the North is ready for more active measures toward denuclearization, indicating it expects some sort of give-and-take during the negotiations process.

Seoul has been playing the mediator role between Pyongyang and Washington, and Kim told Chung of his unwavering trust in President Trump and his continued commitment to complete denuclearization amid the impasse in negotiations with the United States.

In a statement, Bolton confirmed he had received a “comprehensive report” from Chung. The two sides “agreed to stay in touch” ahead of the third Moon-Kim summit in Pyongyang on Sept. 18 to 20, and “ahead of President Moon’s attendance of the UN General Assembly in late September, during which he and President Trump intend to meet.”

Bolton has previously suggested that the United States would be able to physically “dismantle the overwhelming bulk” of North Korea’s nuclear and ballistic missile programs “within a year.” He said in an interview with CBS at the beginning of July that this plan would require “full disclosure” of all of North Korea’s “chemical and biological, nuclear programs, ballistic missile sites.”

Pyongyang has pushed Washington for reciprocal measures as it takes goodwill steps toward denuclearization. Washington has been demanding that Pyongyang take more concrete steps, such as disclosing a complete list of its nuclear stockpile and related facilities, and maintains that there will be no sanctions relief for the North until it fully denuclearizes.

A declaration to end the Korean War can be seen as a gesture by Washington that it will offer security guarantees for the North. However, if such a declaration were to be signed within the year, it would likely have to happen before the U.S. midterm elections in November.

Some in Seoul and Washington have expressed concerns that a nuclear deal could include a demand by Pyongyang for a drastic reduction or withdrawal of the 28,500 U.S. troops from the Korean Peninsula.

Trump himself has suggested that he is not adverse to the eventual withdrawal of U.S. troops from Korea, though he recently signed a defense authorization bill that restricts him from unilaterally reducing the number of American troops in Korea to below 22,000 military personnel.

Kim Jong-un directly addressed such concerns, saying that “such claims are completely unrelated to a declaration to end the war,” said special envoy Chung. Blue House spokesman Kim Eui-kyeom told reporters Friday that Chung conveyed North Korean leader Kim’s message to Bolton, who would have relayed it to Trump.

When asked whether a corresponding measure can be expected from Washington, spokesman Kim replied, “Now that North Korea’s message has been conveyed [to the United States], we look forward for President Trump and his policymakers to carefully deliberate and come up with some sort of measure.”

When asked if the South and North Korean leaders were on the same page on a denuclearization timeline, the spokesman replied, “The two leaders share the view that there is need to speed along denuclearization, as well as the establishing of a peace regime on the Korean Peninsula.”

In a meeting to prepare for the third inter-Korean summit on Thursday, Moon said that the “special envoy’s visit went well, and the results exceeded expectations.” Moon said he has high expectations for his upcoming summit with North Korean leader Kim in Pyongyang and for “North-U.S. talks toward the complete denuclearization of the Korean Peninsula to become expedited.”

Trump likewise signaled optimism following the special envoy’s Pyongyang trip in a Twitter message Thursday, around the time of Bolton’s phone call with Chung, noting that leader Kim had proclaimed “unwavering faith” in himself. He added: “Thank you to Chairman Kim. We will get it done together!”

But U.S. Secretary of State Mike Pompeo was more cautious when asked to clarify Kim Jong-un’s remarks that a declaration ending the Korean War would not lead to withdrawal of U.S. troops in South Korea and whether denuclearization needs to come before an end-of-war declaration.

Pompeo, skirted the question in a press briefing in New Delhi on Thursday but added, “We will continue to work with them to deliver for the world, as against the UN Security Council resolutions, and for Chairman Kim to deliver on the commitment that he made to President Trump in Singapore.”

The U.S. State Department announced Thursday that Stephen Biegun, the new special representative for North Korea policy, will travel to Seoul, Tokyo and Beijing on a six-day trip kicking off next Monday. It did not mention any plans for Biegun, a former Ford Motor executive, to travel to North Korea.

In late August, a planned trip to Pyongyang by Pompeo and Biegun was canceled abruptly by Trump, citing a lack of progress in denuclearization talks. Reportedly, he was angered by a belligerent letter to Pompeo by Kim Yong-chol, the vice chairman of the North’s ruling Workers’ Party.

The department said in a statement that Biegun “will meet with his counterparts and continue diplomatic efforts to achieve the final, fully verified denuclearization of North Korea as agreed to by Chairman Kim in Singapore.”

Biegun and Lee were expected to discuss special envoy Chung’s Pyongyang visit, evaluate the current situation on the Korean Peninsula and discuss future measures for its denuclearization and establishment of a peace regime, along with bilateral cooperation, according to the ministry. Lee was set to hold his first phone conversation with Biegun Friday evening ahead of the U.S. special envoy’s visit.

The Blue House announced that Moon will be sending special envoys to China and Japan to brief the countries on the outcome of the Pyongyang trip.

Chung will travel to Beijing Saturday and meet with high-ranking Chinese politician Yang Jiechi, the director of the Office of the Foreign Affairs Commission of the Chinese Communist Party’s Central Committee.