Tradition takes a back seat this Chuseok

Tradition takes a back seat this Chuseok 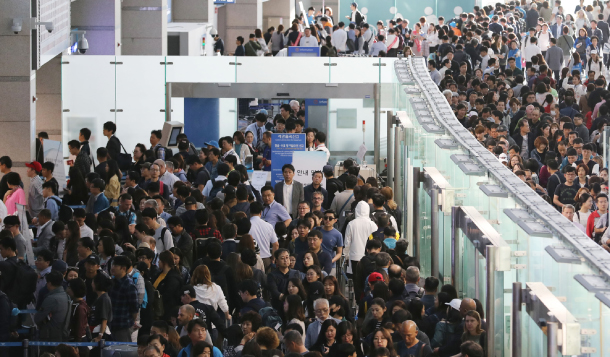 Tickets for flights during the upcoming Chuseok harvest festival are selling like hot cakes as more Koreans opt to spend the traditional holiday overseas.

Chuseok is Korea’s second-biggest holiday after the Lunar New Year. Both holidays see people across the country traveling to their hometown to visit relatives, share food and perform ancestral rites.

In recent years, many Koreans have been cutting family time short or forgoing meeting relatives, opting instead to take advantage of the time off - this year, most people will have at least five days off including the weekend - to travel abroad instead.

Many people request vacation days for the rest of the week, allowing them to travel for longer or spend time with family before heading abroad.

“I will be at my parents in Jeonju, North Jeolla, from Sept. 22 until the morning of Sept. 24,” said a 33-year-old office worker. “I booked a flight on the afternoon of Sept. 24 to make a solo trip to Tokyo until Sept. 30. I asked my company to let me take days off on Thursday and Friday that week.”

For some intrepid travelers, the easiest way to head overseas while still observing the Chuseok holiday to some extent is to take their extended family along with them.

“I am thinking about flying to either Vietnam or Thailand during the Chuseok holidays with my wife and parents,” said a 31-year-old civil servant. “I plan to get days off on Sep. 27 and 28.”

Airline data already reflects the growing trend to head overseas during the holiday.

An average of 82.3 percent of seats on Asiana Airlines’ international flights departing from Korea between Sept. 22 and 30 were already booked as of last month, according to data compiled by the airline industry. The most popular flights are to Venice, Saipan, Barcelona, Paris, Istanbul, Cebu, Taipei and Bangkok.

Similarly, an average of 78 percent of seats on Korean Air’s international flights have already been reserved. Popular destinations include Okinawa, Phuket, Sydney, Barcelona and Hawaii.

“Reservation rates for flights during the Chuseok holidays are quite high,” said a Korean Air spokesman. “We expect planes heading to popular locations to fly at nearly full seating capacity when the holidays arrive.”

Low-cost carriers like Jeju Air are also experiencing a similar boom for flights bound to nearby destinations like Japan, China and Saipan between Sept. 22 and 30.

“We have a high concentration of passengers who have booked their flights to leave during the beginning of the Chuseok holidays and return either on Sept. 26 or on Sept. 29 and 30,” said a Jeju Air spokesman.

Tour operators are benefiting from the Chuseok travel frenzy as well, with sales of package tours to Japan, Vietnam and Thailand especially on the rise.

“Around twice as many customers have signed up for overseas package tours between Sept. 22 and 26 compared to the off-season,” said a spokesman from Hana Tour, one of Korea’s largest tour operators.

“Though, in the past, it was usually young people that went abroad during the Chuseok holidays, beginning from last year, increasingly more families have been traveling overseas,” added the spokesman. “Now, it’s common to see family members across three generations booking trips together.”

With so many people expected to travel overseas later this month, Incheon International Airport is expected to set a new record.

“The number of passengers flying abroad between this January and August increased by 10 percent compared to the same period last year,” said a spokesman for the airport. “This year, we may see the highest number of people flying overseas on a single day during the Chuseok holidays.”

Travelling abroad is not the only way Koreans plan to enjoy their Chuseok holidays. Many have already reserved rooms at local hotels to go on so-called staycations and take time off in Korea.

According to the Conrad Seoul in Yeouido, western Seoul, some 50 percent more guests booked a stay at the luxury hotel during this year’s Chuseok holidays compared to last year. The Westin Chosun Hotel in central Seoul reported that it expected a 15 percent increase in the number of guests reserving rooms.

“We expect there will also be more families that visit the hotels’ restaurants and buffets [during the Chuseok holiday],” said a spokesman from Shilla Hotel in central Seoul.