Old Euljiro has new secrets hiding in its dark alleys: The area, known for its print shops, now hosts a crop of trendy bars and cafes

Old Euljiro has new secrets hiding in its dark alleys: The area, known for its print shops, now hosts a crop of trendy bars and cafes 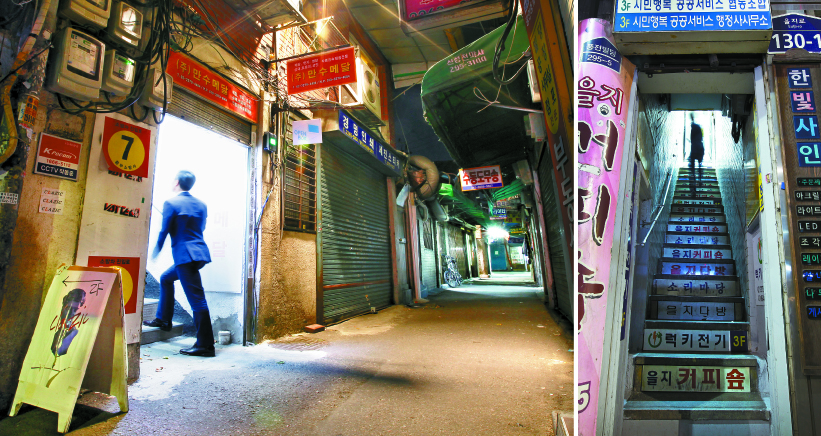 It’s tough finding trendy cafes and bars in Euljiro’s labyrinthine alleys, as many are hidden on the top floors of buildings without any signs. Left, the entrance to Clazic, and right, Euljiro’ Mantic’s entrance. [PARK SANG-MOON]

A man in a suit quickly steps into a small alley filled with shops that are shuttered for the night. Many of the businesses look long-abandoned, and broken locks and bits of brick and glass litter the alleyway.

The man uses his flashlight to light his path. He stops at one building, takes a look around, and then walks up the stairs. A few minutes later, a few other people do the same thing, as if they’re meeting to discuss secrets in this desolate part of town.

This is a common scene in Euljiro, an area that’s long been known for the printing shops and light industry centered around Euljiro 3-Ga station on Seoul Metro lines No. 2 and 3. Many of the formerly abandoned upper floors of the area’s low-lying buildings are filled with hidden new bars and businesses.

These cafes and bars are hard to spot unless you have their exact address, as they usually don’t have a sign outside. The best way to find them is to get the exact building number and take a walk up the stairs. Usually, these hole-in-the-wall bars and cafes are kind enough to at least have a piece of paper with their name on the door for visitors.

The area’s bar and cafe scene started accidentally. Since the rent on the upper floors of old buildings was cheap, artists fleeing gentrified neighborhoods made their new home in the Euljiro printing alley over the past five years. Some artists decided to sell either drinks in one corner of their studio to mingle with one another and make some extra money to pay rent.

Some of those places started to go viral on social media, as non-artist crowds found it fun to search for hidden spots in a neighborhood that feels out of step with modern-day Seoul. Just two years ago, the neighborhood had only a few hip bars, such as Hotel Soosunhwa and Seendosi, but now, even Euljiro insiders can’t keep track of all the new spots opening up.

Wine bar Sipboon’il is one of the first trendy hotspots to open in Euljiro, and it’s a magnet for workers from nearby offices. To find Sipboon’il’s main door, visitors have to head down a spooky alley. The message “Wine, cheese, no soju” on the door has gone viral on social media.

Euljiro’s new crowd of businesses rely on social media, especially Instagram, to get customers to drop by. Every cafe and bar, it seems, has a signature drink or some distinct feature that can’t be found elsewhere.

The cafe George uses part of its space as a showroom for vintage fashion, while nearby Baekdu Gangsan features an eye-catching chandelier that makes the photos taken in the cafe especially eye-catching.

Many business owners said that they’re surprised that people find their place in such an out-of-the-way location.

Some visitors to Euljiro make a list of places they want to go, and spend the entire day cafe and bar-hopping. None of the places in the neighborhood are more than a five-minute walk away, making it easy to try out many different places.

Drink prices in Euljiro are often cheap, adding to the area’s charm. A glass of Jameson Irish whisky will run you as little as 5,000 won ($4.45) at The Edge, a bar that frequently hosts musical performances. Cocktail prices in the neighborhood rarely top 10,000 won. Most wine bars’ bottles are less than 50,000 won. These affordable prices appeal to the office workers and penny-pinching young scenesters that fill Euljiro’s coolest haunts.

Euljiro is best experienced with an open mind and fully-charged phone, as visitors need to constantly check street names and numbers to find their destinations. In the darkened alleys, a flashlight also comes in handy.

The name of this bar comes from 5:37 p.m., the time of the day when office workers start itching to leave work, according to its owners.

The bar is hidden on the fifth floor of its building and has an area of about 37 pyeong (1,316 square feet).

Five Thirty Seven is popular for its terrace area, especially as nighttime temperatures have started to drop recently. The outside has a terrace that offers view of the taller buildings in the Euljiro area.

While most patrons go for wine bottles, for those who want to enjoy a cocktail, the bar offers a 1-liter sharable cocktail served in a beaker.

This cafe is also a vintage fashion showroom. Two designer friends’ selections of vintage clothing, shoes and other fashion items are displayed to welcome those who enter the cafe.

The designers Ko Eun-young and Kim Gyu-rim used to run the cafe, which makes its own baked goods, but decided to have their family take over the operation to focus on making clothing, as their original plan was to use this place as their atelier. The cafe was getting busier and busier, which distracted from their fashion ambitions. George will be used to promote the pair’s new clothing label, Isabella Dragon. The names of cafe and their clothing label come from the fashion comic and anime Paradise Kiss by Ai Yazawa.

French-Korean owner Antoine runs this bar, which is bathed in neon-pink light. The place is relatively easy to spot compared to the others, as one simply needs to find the traces of this pink light that enters the alley.

The bar hosts DJs for parties on Fridays and Saturdays. The Edge used to be connected to Clique Records, a record shop right next door, but the shop moved so the bar could accommodate more visitors.

The Edge offers now-trendy natural wine, which is made without any chemical additives during the winemaking process. Other options include whisky, cocktails and beer. House-made punches are also available, and the flavors change weekly.

This cafe and wine bar is also a gallery. The co-owner of the place, Kwon Ga-in, ran another nearby bar called Mulgyeol for two years, but recently opened Deepmot as a bigger space where she can host exhibitions and flea markets. The opening exhibition starts today, and the flea market will be held on Saturday. Kwon used to make crafts out of metal, but found it more fun to gather people at her place to talk and work together. The cafe has large windows covered with thin white curtains, and the inside gives off retro-jungle vibes with its many green plants and antiques.

An aspiring chef opened this all-day cafe to express her culinary ideas to visiting guests. The name Clazic reflects the owner’s plan to give her own twist to classic drinks, such as the flat white or iced tea. She makes her own secret sauce for her cinnamon flat white to make it one of her signature drinks as well as basil iced tea.

This bar’s long table seats a maximum of three people by the window and offers views of main Eulji-ro street near the subway station. The owner Kim Young-joo said that couples often choose these seats. 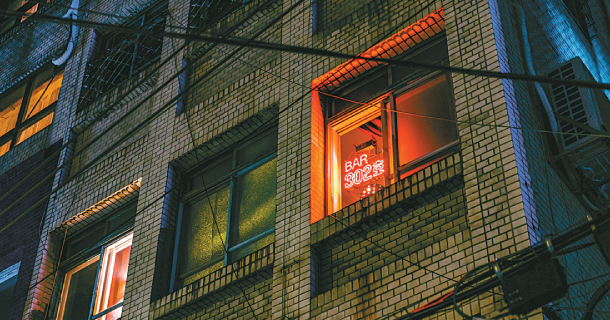 The bar only has counter seats. On busy days, its 15 seats fill up quickly.

It offers gimmari, a popular Korean street food made with sweet potato noodles rolled in gim (seaweed) and then fried, among other dishes.

The owner, Kim Tai-youn, of 302ho felt that the visitors to his bar are looking for something new, and tend to come back again after they experience it. The owner’s background as an artist is reflected in every corner of the bar, including in his hand-made decorations, such as light covers. He believes that he is selling ambience more than just drinks. 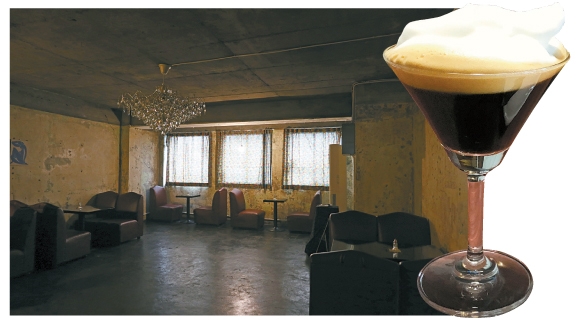 Two sculptors Paik Jae-hee and Kang Kyeong-mi decided to open their own coffee place in Euljiro, as they liked the unique atmosphere of the area.

The name Baekdu Gangsan comes from the two owners’ surnames, Paik and Kang. They decided to display a photo of Mount Paekdu, which is also spelled as Mount Baekdu. Baekdu Gangsan is a word that often used to described Korea’s nature.

All visitors to Jan must choose what type of cup they want from a variety of different mugs and glasses offered to visitors.

Jan, which translates to glass or cup in Korean, has a table and shelf filled with cups and glasses. This is one cafe that doesn’t have to worry about Korea’s newly-introduced ban on disposable cups.

The cafe is on the second floor and is adorned with boldly patterned wallpaper. Some lamps have covers made with hats, which adds character to the place.

The cafe has its windows covered with blue opaque film, which changes the color indoors based on the amount of daylight it receives as it blends with the cafe’s pink indoor lighting. The owner, Lee Ho-ryun, is a former software engineer who now develops mobile applications independently.

He strives to make his cafe feel like a small coffee place found in Europe. Seoulite often plays movies with scenes of European cities on a projector. The owner also displays some jewelry made by his friend for sale.