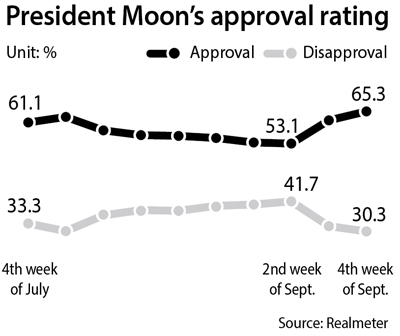 President Moon Jae-in’s approval rating is again rising thanks to a successful summit with North Korean leader Kim Jong-un last month in Pyongyang, sending it back to the mid-60 percent range after tumbling into the low 50-percent level before the summit.

In a poll conducted by Realmeter at the request of local broadcaster CBS from Thursday to Friday, Moon’s popularity rose to 65.3 percent, a 12.2 percent hike from two weeks earlier thanks to his diplomacy with North Korean leader Kim and U.S. President Donald Trump over the past two weeks.

The poll was conducted on 1,502 adults nationwide and has a margin of error of plus or minus 2.5 percentage points.

The rebound came after weeks of decline caused by growing concerns over the direction of the economy, particularly disappearing jobs possibly linked to the administration’s so-called income-led growth policy.

One of the most stinging economic figures was the number of new jobs created in August. New hires in August totaled only 3,000, even worse than July’s 5,000 - and woefully short of the monthly average of 316,000 in 2017, with people in their 40s seeing the biggest job losses for their age bracket in 26 years, according to Statistics Korea last month.

But with nearly seven out of 10 Koreans viewing positively the Pyongyang Declaration signed at the Sept.18-20 summit in the North Korean capital, Moon’s ratings rose, reminiscent of the way his popularity soared to nearly 80 percent in June on public expectations for a breakthrough in inter-Korean and the North-U.S. relations after a June 12 Singapore summit between North Korean leader Kim and U.S. President Donald Trump.

In a poll conducted by the JoongAng Ilbo on Thursday and Friday of last week on 1,000 adults nationwide, 68.9 percent of respondents said they were satisfied with the outcome of the third Moon-Kim summit. The other 26.8 percent said they were not happy with it.

The polling firm Realmeter attributed the rebound to the “peace diplomacy” that Moon orchestrated through his summits with North Korean leader Kim and Trump in recent weeks.

A summit rebound has a history. There have been five inter-Korean summits since the first was held in June 2000 between former President Kim Dae-jung and then-North Korean leader Kim Jong-il, father of Kim Jong-un.

According to Gallup Korea, the late Kim Dae-jung’s approval rating jumped to 54.4 percent in August 2000, about a month after his meeting with Kim Jong-il in Pyongyang, from 48.5 percent six months earlier.

Former President Roh Moo-hyun also saw his approval rise to 30.7 percent in the first week of October 2007, when he made a visit to Pyongyang for a summit with Kim Jong-il, more than a 10 percent hike compared to three months earlier.

Experts warn that while Moon’s rating has returned to the mid-60 percent range, it could fall again on bad economic news because the approval is based on “emotional factors” and can easily evaporate if not supported by an improved economy.

“To sustain momentum created by the Pyongyang summit, it is a must for the economy to work as an underlying force supporting the president since the economy is what people care most about,” said Bae Jong-chan, director of pollster Research & Research.