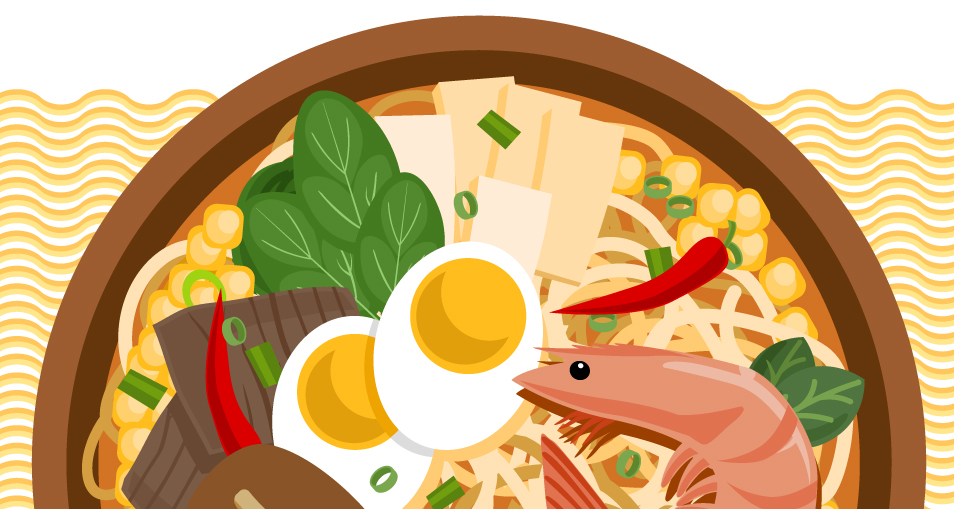 The defining characteristic of a noodle is that it’s long. Chinese and Koreans alike serve noodles at birthdays and weddings for their symbolism - a kind of prayer for longevity in a life or marriage.

Long, too, is the history of noodles, arising in China 4,000 years ago to eventually spread around the globe. In Korea, regional tastes, agricultural limitations and even war have created a unique noodle culture. And although our noodles have yet to gain the same level of recognition as Japan’s ramen or Vietnam’s pho, Korea’s overall coolness cachet is on a steep incline. It’s only a matter of time before global foodies catch on to its noodles, especially for such unique qualities as broths made of sumptuous beef or savory anchovies, not to mention the kimchi component.

And who wouldn’t be intrigued by noodles served in a broth so cold it has floating chunks of ice?

In the eighth century, Buddhist monks from the Silla Dynasty (57 B.C.-A.D.935) traveled to Tang Dynasty China to study and train. These monks returned with new ideas, including the wheat-flour noodle recipes that had spread in China.

At first, these recipes were consumed only by monks and scholars in Buddhist temples. They believed that noodles brought longevity and health, a sentiment that exists today. But most common people did not have the time, energy or resources required to make noodles. Noodles really began to catch on during the Goryeo Dynasty (918-1392) when Mongols introduced buckwheat to the northern region of the peninsula.

At around this time, the most iconic Korean noodle dish was born: naengmyeon (cold noodles). There were two main regional varieties: Pyongyang and Hamheung. Pyongyang’s terrain and climate was ideal for buckwheat, so their version of naengmyeon was buckwheat noodles and pickled radish in a chilled dongchimi, or radish kimchi broth. In contrast, Hamheung’s terrain could not support buckwheat, so sweet potato starch was used. Hamheung naengmyeon was sweet potato noodles covered in a spicy red pepper sauce without any broth. While naengmyeon is a cold dish, people ate naengmyeon during the winter because sweet potato and buckwheat were harvested in the fall and were the most fresh during wintertime.

The dongchimi would be stored underground and freeze during the winter. As a result, the naengmyeon would have chunks of frozen broth floating around the bowl when it was served. This icy broth tradition has continued to this day. Koreans now enjoy a cold, refreshing bowl of naengmyeon during the summer when they want a break from the sweltering heat.

Naengmyeon today comes in two forms: mul (water) and bibim (mixed) naengmyeon. They are evolved versions of the original Pyongyang and Hamheung styles. Mul naengmyeon is the term for non-spicy noodles served in broth and bibim naengmyeon for the brothless and spicy type. A significant difference between the old and new generations of naengmyeon is that contemporary restaurants use a high percentage of starch compared to buckwheat in their noodles; potato or wheat starches are cheaper than buckwheat. This starchier noodle is chewier. Traditional naengmyeon, especially Pyongyang naengmyeon, use very high portions of buckwheat for a firm, grainy texture.

Over time, the variety of Korean noodles expanded exponentially. Noodle dishes tailored to regional crops and tastes have created a vast menu. In addition, Korea’s conflict-ridden history is responsible for some of the nation’s most beloved dishes.

As the 1950-53 Korean War ended and refugees flocked to the port city of Busan, exchanges between American soldiers and Korean civilians gave birth to mil (wheat) myeon, a form of naengmyeon that used the wheat Americans introduced rather than the traditional buckwheat or sweet potato noodles. During the Japanese occupation of the early 20th century, Koreans adopted the Japanese/Chinese chanpon noodle dish and made it their own by adding chilli powder and chilli oil to create jjambong. Perhaps the most popular noodle dish in Korea today is jajangmyeon, an offshoot of Beijing’s black bean zhajianmian noodle dish.

Over the next 52 weeks, the Korea JoongAngDaily will bring readers on a Korean Noodle Tour, introducing them every Friday to the best noodle restaurants on the peninsula. The Korea Noodle Tour will be wide-ranging, appetite-inspiring - and long. 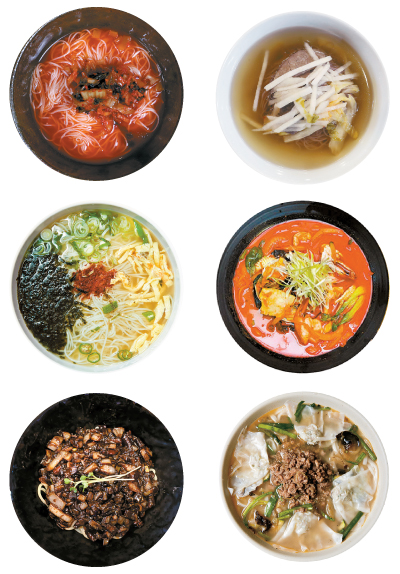 Many types to choose from

Naengmyeon: Cold noodles generally made of buckwheat or sweet potato starch served in either a chilled dongchimi (radish kimchi broth) with sliced beef and pickled radish, which is called mul naengmyeon, or a sweet and spicy pepper sauce sometimes with raw fish or sliced beef, bibim naengmyeon.

Naengmyeon restaurants put scissors, mustard and vinegar at each table. The scissors are used to cut the incredibly long noodles and make them more manageable. Vinegar and mustard can be added to enhance the flavor. Traditionalists say that the noodles, symbolizing longevity and good health, should not be cut. They also insist on eating mul naengmyeon without any added vinegar or mustard. The cutting and condiments debate may never be won, but most Koreans happily agree there is nothing better than an icy bowl of naengmyeon on a summer afternoon.

Kimchi-bibim-guksu: A spicy dish consisting of thin buckwheat (as used in naengmyeon) or wheat-flour noodles and a chopped kimchi and red pepper sauce topped with a boiled egg and sliced cucumber.

Kimchi-mari guksu: Thin wheat flour noodles are served in a chilled dongchimi broth with chopped kimchi, sliced cucumber and a boiled egg. This dish is tangy, spicy and refreshing and some say this dish is perfect the morning after a night of drinking.

Kongguksu: A noodle dish consisting of thin wheat-flour noodles in a cold soybean broth. The nutrient and protein-rich soybean broth is perfect for humid and sweaty Korean summers.

Kalguksu: A warm soup consisting of handmade, knife-cut wheat-flour noodles served in a broth that depends very much on the region.

Many inland, countryside areas use chicken to create the broth; coastal areas tend to use seafood; and mountainous regions often use anchovies. Kalguksu is considered to be a type of soul food in Korea because of its hot and savory broth.

Janchi guksu: A warm noodle dish made of wheat-flour noodles with various vegetables in a clear anchovy or beef-based broth. Janchi means celebration or banquet because janchi guksu is traditionally served at events like birthdays or weddings.

Kotdeungchigi guksu: The buckwheat noodle soup is found in Korea’s mountainous Gangwon area. Kotdeungchigi means hitting the top of the nose in Korean. That can happen when you eat this dish because of the local noodles stiffness. Round potato ongsimi, or dumplings, are included.

Milmyeon: This noodle soup is much loved in Busan, the southeastern port city of Korea. The broth is usually made from bones of pigs or cows. The dish can be served cold or hot.

Gogi guksu: A must-eat dish on Jeju Island, the broth is made from pork and the noodles are generally thick.

Japchae: A staple of any celebration banquet, this noodle dish is served as a banchan, or side dish, and consists of transparent cellophane noodles made of some form of starch, usually sweet potato starch, stir fried with vegetables and beef.

Jjajangmyeon: Originally a noodle dish from Beijing, the Korean version has thick wheat-flour noodles in a black bean sauce with stir-fried vegetables (usually onions) and pork or seafood. This dish was first served in Korea’s Incheon Chinatown in 1908 and had become a cheap option for a quick meal by the 1950s.

Jjambong: A noodle dish with a complicated history, jjambong combines Chinese egg noodles with a variety of seafood and vegetables in a savory, bright red broth.

Jjolmyeon: Jjolmyeon is a spicy and sweet noodle dish served with wheat-flour noodles in a chilled red pepper sauce topped with sliced cucumber, seaweed and a hard-boiled egg.