The second U.S.-North Korea summit will be held “in the next couple of months,” White House national security adviser John Bolton said in a radio interview aired Friday, suggesting it may not be held by the end of this year. 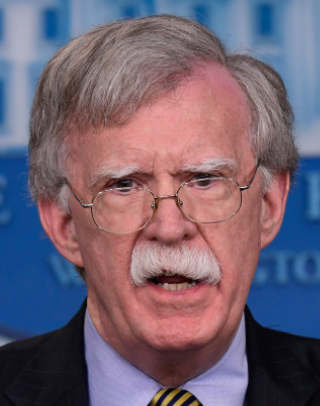 Bolton’s remarks came after U.S. President Donald Trump said last Tuesday that his second meeting with North Korean leader Kim Jong-un will take place after the U.S. midterm elections on Nov. 6 and that three or four venues were being discussed. Some analysts had presumed the summit would be held before the U.S. midterms so that Trump can use any positive outcomes to gain political points on his home turf.

In a radio show hosted by Hugh Hewitt and recorded on Thursday, Bolton said the North needed to give up its nuclear weapons “completely and irreversibly.”

“The president has held the door open for North Korea,” Bolton said, referring to Trump. “If they … walk through the door, the future could be very different for the North Korean people.”

The North Korea hawk continued that Trump was “optimistic” about diplomacy with the North but that the White House chief didn’t have “stars in his eyes about this,” neither did himself, U.S. Secretary of State Mike Pompeo or U.S. Secretary of Defense Jim Mattis.

Bolton said he believed the combination of the potential use of military force against Pyongyang and the maximum pressure campaign are what induced Kim to come to the discussion table for denuclearization.

But with no news of working-level meetings announced between North Korea and the U.S. to fine-tune details for a second summit, it appears denuclearization talks have once again entered a stalemate.

Heather Nauert, spokesperson for the U.S. State Department, said last Tuesday that Stephen Biegun, the U.S. special representative for North Korea, “looks forward to having follow-on conversations with his counterpart” in order to start “intensifying discussions on some of those four pillars that were laid out in the Singapore summit,” the first summit between Kim and Trump on June 12.

Biegun’s counterpart is seen to be North Korean Vice Foreign Minister Choe Son-hui. Another spokesperson for the U.S. State Department, Robert Palladino, said Wednesday that there was no trip announcement to make at the time, adding it was something the department was “looking at” and “working” on.

Meanwhile, North Korea seems to be laying the groundwork for a summit with China and Russia.

Dmitry Peskov, the Kremlin spokesperson, announced on Oct. 8 that consultations concerning Kim’s visit to Russia are underway, including a possible date, place and format, according to Russia’s state-run news agency, TASS. Peskov reportedly said that a formal invitation to visit Russia was conveyed to the North Korean leader, and that an announcement was to be made in case details of such a visit are agreed to.

North Korea’s official Korean Central News Agency reported last Friday that Kim sent a “message of greeting” to Russian President Vladimir Putin on the occasion of the 70th anniversary of diplomatic relations between the two countries.

The article made no mention of a summit, but Kim was said to have expressed his belief that the “strategic and traditional” friendship between the allies will “continue to develop steadily and constructively in conformity with the requirements of the new era and the interests of the peoples of the two countries,” according to an English version of the report.

In a cabinet meeting at the Blue House on Oct. 8, South Korean President Moon Jae-in said Kim was expected to visit Russia and Chinese President Xi Jinping was likely to make a visit to North Korea. North Korean Vice Foreign Minister Choe was speculated to have discussed Xi’s possible visit to the North when she visited Beijing on Oct. 4 and 5 to talk with Chinese diplomats.

Shin Beom-chul, head of the National Security and Unification Center at the Asan Institute for Policy Studies in Seoul, analyzed that Pyongyang was out to gain negotiating power against the United States by strengthening its alliance with Russia and China.