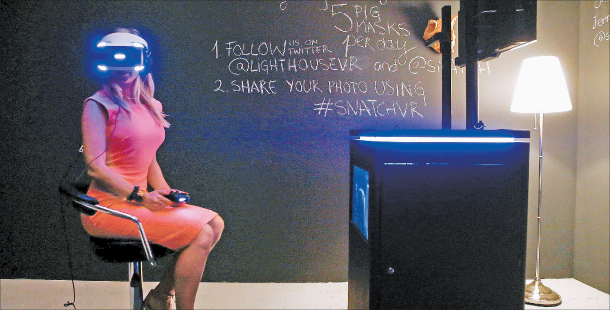 Virtual Reality (VR) is no longer just a fad.

The immersive technology is rapidly increasing in popularity, with companies from across the cultural spectrum scrambling to find a use for VR.

Unsurprisingly, the entertainment industy has welcomed VR with open arms. After initially finding a home in the world of gaming, VR is increasingly being adopted by the film and art industries.

The initial popularity of VR gaming and the falling price of hardware have worked together to boost the emerging VR market, which was valued at $2.2 billion in 2017. According to market research agency Statista, the market is projected to grow to 19 billion dollars by 2020, an incredible rate of growth in such a short period of time. Global revenue is projected to hit $21.5 billion by the same year.

Korea expects to see huge growth as well. The market here is forecast to grow from 1.4 trillion won ($1.26 billion) in 2016 to 5.7 trillion won in 2020, according to the Korea VR AR Industry Association. Following the trend, major mobile carriers are also expanding their investment in the market. KT’s goal, for instance, is to raise its annual revenue from VR-related technology to 100 billion won by 2020.

There are, of course, still limits that need to be overcome to raise the technology’s market potential. Some of the common obstacles are the physical inconvenience of wearing the head mounted display (HMD) and the high entry barrier of purchasing VR equipment.

“The idea of VR has been around since the ‘70s, but it was not commercialized due to limitations in the technology,” said researcher Shim Woo-jung from Korea Institute for Industrial Economics & Trade. “Followed by the advancement of technology that backs up the idea of VR, it has begun to be treated more seriously over the past few years. But there still are limits like the high cost of VR devices, technological limitations that cause physical inconvenience for users like nauseousness, the headset’s heavy weight and the difficulty of adjusting its optical focus.”

Shim added, “These obstacles are preventing the market from rising into the mainstream,” implying that the VR market should rise to the mainstream when these limitations are handled.

Despite such limits, however, artists, many of whom are willing to test their limit and demonstrate their creativity through artwork, have adapted VR into various forms, offering audiences a more refreshing and immersive experience.

VR is a natural fit in the film industry as both mediums are entirely dedicated to delivering visual content.

Due to the limits of the technology, however, watching movies in the cinema in VR is still not really possible. Currently, 3-D IMAX movies are the closest that most audiences can get to a truly immersive experience in theaters, but that doesn't mean that there isn't demand for VR cinema.

VR films do exist, but can currently only be viewed through personal HMDs, either at home or at venues that offer the technology.

Korea is rapidly emerging as something of a powerhouse in the world of VR film. Last month in Venice, director Chae Soo-eung, who also goes by Chuck Chae, won the Best Virtual Reality Experience Award for “Buddy VR,” a 16-minute interactive VR film revolving around a lonely mouse that befriends the film viewer.

Similar achievements were made by Korean filmmakers last year. At the 74th Venice Film Festival, director Kim Gina was awarded the Best VR Story Award for her 12-minute film “Bloodless,” the story of a 26-year-old Korean sex worker who was brutally killed by an American soldier in 1992. Kim’s co-winner at the event was Korean-American director Eugene Chung, who won the Best Virtual Reality Award for “Arden’s Wake: The Prologue,” which tells the story of a young woman living in a post apocalyptic world.

“Korea is one of the countries at the forefront in actively applying VR in films,” Chae told Korea JoongAng Daily in an interview earlier this month. “But this also means that we are the test market. As of now, there are not that many people working in the VR film industry because people are not feeling confident about where this is heading.”

The Ku Bom-sok-directed romance feature was screened in CGV’s Yongsan branch in central Seoul for six days starting on March 31.

“We screened the world’s first VR 4DX title,” said Hwang Jae-hyeon from CGV. “We are ready to screen VR films when there is good content.”

He added, “However, there are still technological limits that disrupt audiences from comfortably enjoying VR movies due to the heavy equipment, and I believe [higher quality] content needs to be presented before we open an official theater that exclusively screens VR films.”

The difference between VR games and movies can be incredibly difficult to discern. As some VR films require users to personally unravel the plot based on the actions they take, the line between gaming and watching is increasingly blurred.

But there are differences.

According to Chae, the distinction between the two lies in the existence of a plot and how much empathy the characters arouse from the audience.

Though companies like Sony have brought out gaming headsets like the PlayStation VR, released in 2016, the kind of games that are commonly available to people that don't own the games console and add-ons are much simpler. VR cafes, where customers can rent access to a small room equipped with a PC and headset, are the most common way that most people access VR. The games on offer are usually very simple like slicing fruit and skiing.

“The market for VR is still in the development phase,” said game critic Kang Ji-woong. “What matters more than the quality of these games is the direction they are heading in and how they are being experimented with."

Due to people’s interest in games and their easy accessibility, they can be used as the means to gradually expand familiarity with the technology.

As of now, gaming is one of the industries in which VR is being most actively and quickly adopted, according to Kang. “Adding VR to games can raise people’s general awareness of VR and could ultimately contribute to commercializing the technology as well as expanding its application to many different fields from medical science to telecommunications."

At the forefront of the local VR market is Barunson, which produces and invests in VR content, including games.

According to Jeong Min-gun from Barunson, the biggest obstacle in the development of VR games, apart from the technological limits, is maintaining the balance between users’ VR experience and convenience.

“To play a VR game, players need an assistant who can guide them [as they can’t see what’s around them in the real world once they put on the VR headset],” he said. “The whole point of VR is to raise users’ immersive experience.

"But to enhance their experience, things like subtitles and narration have to be inserted in the virtual world, which paradoxically disturbs the immersive experience.”

Just like in film and gaming, VR has changed the way people enjoy art.

One of the best examples of VR's influence on the art community is the work of Yeom Dong-kyun’s performance.

Originally a graffiti artist, Yeom began incorporating VR into his work two years ago. But instead of taking people into the virtual world he had created, Yeom instead puts on an HMD in front of a crowd and demonstrates his drawing process in his virtual world live, with the output visible to the audience on a large screen. Just like any other performance, Yeom adds elements like music and lighting to make his performance more exciting.

“The biggest advantage to applying VR in art is that there’s no limit in creating an artistic world in terms of the size of canvas and the materials used," said Yeom.

Through VR, Yeom believes art has become easier for average people to enjoy.

“There’s a common perception that art is difficult to understand because it usually requires knowledge of history as well as the artists to understand the true meaning behind the works," said Yeom. "But for my VR art performance, people can simply relax and enjoy the moment.”

Another artist who has brought VR into art is Kwon Hayoun. Under the title Levitation, an exhibition featuring her VR artwork is currently available at the Doosan Gallery in central Seoul.

There, viewers can enter two of her virtual worlds: “The Bird Lady” and “489 Years.”

“The Bird Lady” is a virtual reality recreation of a mysterious and dreamlike space in the memory of a person named Daniel. It invites the viewers to walk into the space and to personally visit his memories. “489 Years” demonstrates Korea’s demilitarized zone through the narrative of a man who served in the military in the DMZ, which is demonstrated through computer graphics. There, viewers can enter the unfamiliar and rarely accessible space and experience a lesser known aspect of the zone.

“VR has changed the way people enjoy art in that they can experience a situation instead of simply seeing an image while standing in front of it,” said Kwon. “Considering that VR art allows viewers to freely roam around the space and control the time of enjoying the art, it forms a stronger connection between viewers and the artwork, creating a more personalized experience.

“Since VR offers the most lively experience compared to other existing mediums, I believe it provides an opportunity for people to more easily access and understand artwork.”