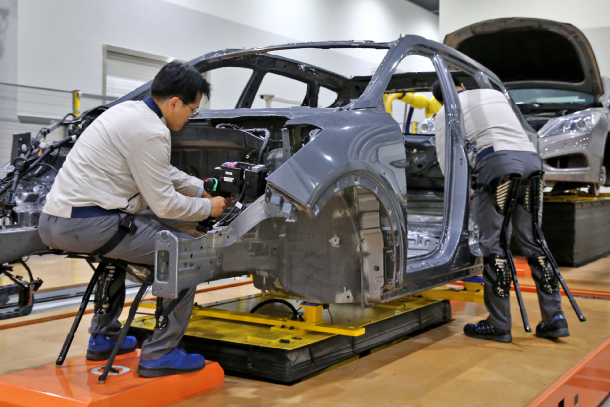 The Hyundai Motor Group will expand the use of wearable robots at its facilities as it works to make robotics a major source of revenue, the company said Monday.

Since September, Korea’s largest automaker has been testing the Hyundai Chairless Exoskeleton (H-CEX) at its North American factory. The H-CEX is an assistive robot for workers who have to stay in a seated position throughout the day. By the end of this year, the carmaker will introduce the Hyundai Vest Exoskeleton (H-VEX) at the same facility.

The H-CEX, the first wearable developed by Hyundai for use at production sites, reduces the use of waist and lower body muscles by 80 percent, reducing the fatigue that results from being in the same seated position for a long period of time, Hyundai said in statement. The soon-to-be introduced H-VEX exoskeleton is for workers in jobs that require a lot of arm lifting. The machine vest will support the upper body and protect neck and shoulder muscles.

“By expanding test applications, we hope to prove the technological effectiveness of our wearable robots,” Hyundai said in statement.

The two exoskeletons were developed by Hyundai’s robotics team, established in May after the company named robotics as one of its five pillars for the future.

The team is preparing to launch other robots focusing on three main areas: wearables, service robots and mobility robots.

Hyundai is gearing up to test a hotel robot capable of providing room service and guiding guests. It will be introduced at the Haevichi Hotel & Resort on Jeju Island and at the Rolling Hills Hotel in Hwaseong, Gyeonggi, from the end of this year.

A car-selling robot with natural language conversation capabilities and artificial intelligence will be prototyped by early next year. By 2020, the automaker plans to introduce a robot that can autonomously charge electric vehicles at charging stations.

“We believe that robotics could be a solution not only for mobility but also for production in areas suffering from population decline,” a spokesperson for Hyundai said. “We plan to make notable achievements in robotics using technological data we have accumulated while developing autonomous cars.”

Hyundai is not the only automobile maker bringing exoskeletons to assembly lines. U.S. automaker Ford has tested EksoVest, an upper-body assisting wearable jointly developed with Ekso Bionics. It was introduced at two U.S. factories in November last year. Ford announced in August a plan to bring the robot to 15 plants globally.