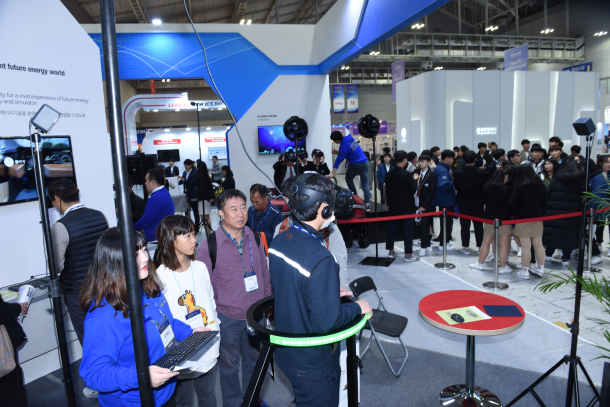 Visitors try out various VR systems, including one where people have to fix a power generator, at the Bixpo exhibition that kicked off on Wednesday in Gwangju. [YONHAP]

GWANGJU - Kim Jong-kap, CEO of Korea Electric Power Corporation (Kepco), stressed the need for energy companies to increase their ability to adapt to the rapid changes ushered in by the fourth industrial revolution.

“Power companies around the world are facing an enormous historic change called an ‘energy paradigm shift,’” said the Kepco CEO during the opening of the Bitgaram International Expo of Electric Power Technology (Bixpo), a forum organized by Kepco, in Gwangju on Wednesday.

The theme of this year’s exhibition is “Energy Transition and Digital Transformation.”

“The first major paradigm shift is the digital transformation, which will mean that our children will experience a world that is completely different from the one we have been living in.

“Big data, artificial intelligence [AI], the Internet of Things and other core technologies of the fourth industrial revolution are rapidly tearing down industrial boarders,” Kim said.

He said that such changes are forcing the electric power sector to be interconnected and fuse with other industries that it previously hadn’t thought of, such as the automotive, finance, construction and communications industries.

“Going forward, power companies must no longer be confined to producing and distributing electricity,” Kim said. “Our advancement necessitates the acquisition of powerful and convenient business platforms,” he said.

David Rogers, a professor at the Columbia Business School and author of “Digital Playbook,” who spoke at Bixpo, said one of the biggest mistakes people make on digital transformation is that they think about technology.

He said the digital transformation is about adapting and rethinking the organizing of one’s business to be more relevant.

“It should be about how to become an essential connector between other different businesses with their own technologies and other capabilities and people, and we become the means by which it all comes together,” Rogers said. “I think that’s important for utility business, if you think about energy, information and data and new value offering … there’s no way one company is going to do all together.”

Rogers also shared his thoughts on how the industry is going to change.

“We’re going to see more capability of distributed power grid markets where there are more sources of electricity that are beyond the traditional ones,” said Rogers. “There will be situations where consumers and businesses are generating their own electricity, and they need an effective means to sell the power back into the grid and go back and forth.

“These kinds of dynamics are going to lead to a lot of new business models and I think the question is: are the incumbents, the traditional players like Kepco, able to innovate and experiment and discover these new business models themselves, are they effectively going to partner with others, or do they leave those innovation entirely to be done by start-ups?”

Bixpo is a major event that was created by Kepco and has been growing over the years since it first debuted in 2015. According to Kepco, while 30,000 people including 600 from 40 foreign countries participated in Kepco’s first exhibition, that figure now more than doubled last year to hit 70,000 participating with 3,000 people from 47 foreign countries.

In its first year, the event brought in 54 export contracts worth $670 million, and last year, 230 meetings between companies took place, leading to $1.46 billion worth of exports.

“Last year, more than 70,000 visitors came to Bixpo,” said Kepco CEO Kim. “And export agreements stemming from the show exceeded about $1.47 billion. I believe this year’s event will prove to be even better in terms of quality and quantity.”

According to Kepco, 282 companies from Korea as well as overseas are participating in the three-day event this year, the largest number of participation so far. Last year, 268 companies took part.

The companies not only include major local energy companies including LS Cable and LS Industrial System, STX, Taihan and Hyosung, but also global heavyweights such as General Electric, Huawei and Siemens. Major technology giants like Samsung Electronics, LG Electronics and SK Telecom and KT are also attending the event.

SK Telecom’s booth showcased blockchain technology that could be used in energy transactions. Other innovations on show included VR that can be used in virtual training like fixing power generators that drew in huge crowds, especially among younger visitors.

Optimizing power management with the latest technologies, whether it’s the use of big data analytics or artificial intelligence, has become a major issue particularly since the Moon Jae-in government has been championing reducing dependency on traditional energy sources including fossil fuels and nuclear power while planning to increase the supply of renewable energy to 20 percent by 2030.

“One of the great changes is the energy transition,” Kim said. “The conventional approach of solely relying on fossil fuels and nuclear powers is no longer viable.”