Charcuterie shop is a slice of France in Seoul

Charcuterie shop is a slice of France in Seoul

Pictured are some of the dishes one can enjoy when eating at the shop. [PARK SANG-MOON] 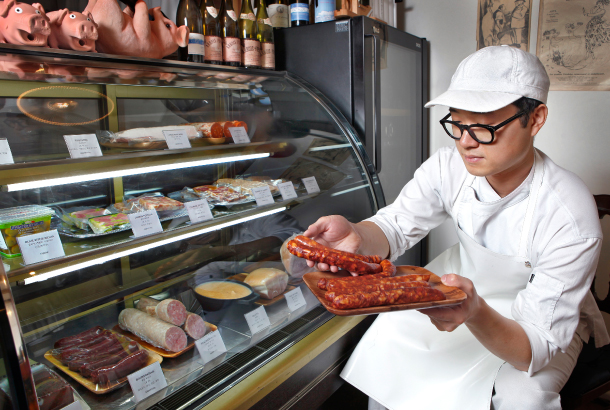 Charcutier Jo Woo-ram of Maison Jo in Seocho District, southern Seoul, displays some sausages he made in front of his store’s showcase. Guests can sit down at one table with only eight seats to enjoy cured meats with a choice of wine. [PARK SANG-MOON]

When it comes to eating pork, most Koreans automatically think about grilling pork belly on a pan and eating it with variety of vegetables, grilled kimchi and deonjang jigae (soybean paste stew). But now, the country is getting more interested in different styles of pork thanks to the influx of many foreign meat products such as jamon from Spain and prosciutto from Italy. Charcutier Jo Woo-ram is putting European ways to enjoy pork on display at his charcuterie shop Maison Jo, which opened in March.

Even though Jo found a home for his first shop in a quiet residential area in southern Seoul’s Seocho District, many who have missed having a variety of hams, pates, terrines and sausages from their time overseas head to this small shop.

The shop’s reputation grew, and those who didn’t have much experience eating charcuterie with their drinks followed to experience what the hype was all about.

Korea also has pyeonyuk (boiled, pressed spiced meat) and other meat dishes that are similar to charcuterie, but since these are time-consuming to make, it isn’t something widely enjoyed at each household unless for special occasions or holidays.

On top of that, as drinking wine was relatively foreign to locals until a decade ago, cured ham wasn’t something Koreans went for when they chose to drink beer or soju, which they often paired with marinated grilled meat or soups.

To Jo, who studied cooking in Italy and came back to Korea to work, started to miss all the types of cured meat he used to eat on his way to school and back. They were not easy to find here, so he started to just make some on his own. He had no prior training or knowledge on charcuterie-making, so he was looking through recipe books. 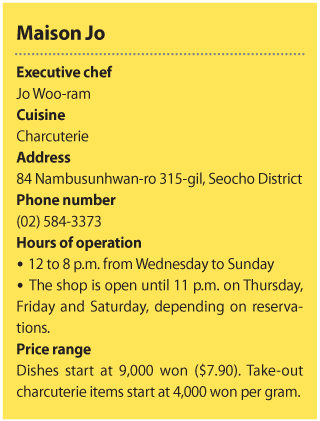 “It takes quite a long time to make charcuterie, but that waiting time was so fun and exciting,” Jo said, adding that he often times cut the time a little short in anticipation but regretted doing so. He expanded the number of cured hams he made to five to six different ones. He set his mind on getting more training on charcuterie making, so he went to France. He was planning to move to Spain or Italy only after six months, but after he tasted charcuterie in France, he soon found himself looking to work at a charcuterie shop. Working at Louis Ospital in southern France led him to a job at another popular charcuterie shop, Maison Verot in Paris.

“I started to feel more and more that being a charcutier is my thing, as you can not only work by yourself, but also set your own pace to make products, which is different from working at a restaurant, where you work as soon as you get orders and cook fast to serve people,” said Jo. “The more I learned in France, the more I realized how unskilled and inexperienced I was when I first tried making cured ham in Korea.”

He spent about five years in France studying and working. He knew he would want to come back to Korea to make a living, and he thought he would miss all sorts of different food and wine he had easy access to in France. He spent most of his salary in France eating at different food stores and restaurants and picturing what he would do in the future once he gets to have his own store. His day would start with eating cheese and charcuterie, and he recalls that every day was a happy memory. Those happy moments are all reflected in his food in Seoul.

“I felt that if I had lived [in France] longer, I would be isolated from the society and grow to only pursue [what I like],” said Jo. “The timing was right for me to come back and try doing my own thing here.”

What he does here in Korea is update recipes that he used to use in France. He has now set his mind on making classic charcuterie and is now testing out ways to make those recipes more unique. He is interested in using more local ingredients as well as Korean pork, but he doesn’t think that using obviously Korean ingredients, such as perilla leaves, is the way to do so.

“I will leave making something obviously Korean to those who study and make Korean food,” said Jo, adding what he can do best is make what used to be unavailable here more common. His efforts to expose people to the world of cured meats has paid off, and many of his customers have grown to be regulars. Some restaurants also get ham from his store. Wine event organizers have come to look for his creations to provide nibbles for their events.

The store uses wood accents for a more rustic feel, and also features many antiques Jo found in Korea and France. Since he uses an animated pig as a mascot, there are many pig-shaped objects around. There are pig dolls on the counter that makes the same noise a real pig would make.

The charcutier didn’t expect so many customers would want to stay and enjoy their food and wine inside the store around the time when he first opened. It is open late on Thursdays, Fridays and Saturdays until 11 p.m. depending on whether a prior reservation is made.

It only has one table that could sit up to eight people. Guests have to sit next to people they don’t know, but that doesn’t stop anyone from going there.

Since the table is for sharing, oftentimes guests start conversations with each other and end up sharing the food and wine they have ordered. If you come with one more guest, you can ask Jo to provide a collection of different items that is enough for two people, or just order an individual terrine or sausage. The charcuterie items are usually garnished with vegetables or fruits when people order in.

“Since the sales from people eating at the table makes a difference, I came to think that locals seem to prefer eating out then bringing food home and eating it there,” said Jo.

What makes Maison Jo even more popular among foodies in Korea is that the shop has more than just meat products. Jo’s partner Lee Eun-hee also makes different types of French-style baked goods, including pies and canele.

This makes the store closer to charcuterie places in France that also sell breads, cheese and desserts to eat alongside charcuterie, according to Jo. For Lee, it serves as a test kitchen for an independent shop that she might open in about three years time.