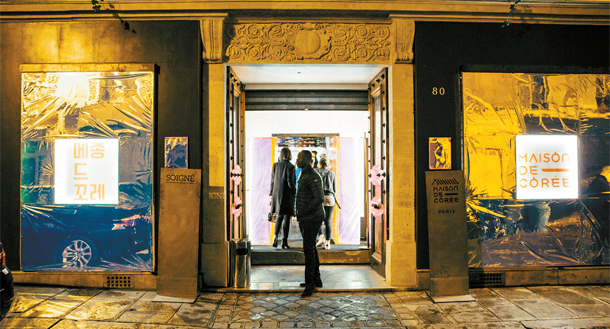 The facade of the restaurant space where the team of Maison de Coree with a chef, a bartender, a Korean celebrity and retailers show cultural items that are popular in Korea at the moment, including food, drinks and music. [MAISON DE COREE]

Seeing how quickly K-pop music and Korean television dramas spread to every corner of the globe thanks to their accessibility online, Maison de Coree, a local retail distribution company, was inspired to do the same for Korean food by making dishes and drinks that are enjoyed by everyday Koreans.

The company brought their idea, along with a chef, a bartender and a singer/actor to Paris last week to run a two-week pop-up event that runs until Nov. 15, introducing the best in Korean cuisine to curious Parisians and hopefully introduce them to new flavors.

Bartender Lee Jin-young of two of Korea’s most well-known bars, Alice Cheongdam in southern Seoul and bar Jungle Book in Jeju Island, chef Lee Jun of Michelin-starred modern Korean restaurant Soigne in southern Seoul, as well as singer and actor Jung Joon-young and flew to Paris together to open the pop-up with retailer Kim Jik and hotelier Kim Sung-sik in the popular Le Marais neighborhood in Paris.

“Although what’s known as Korean culture has widely spread across the world, Korea is still somewhere new in the minds of many, and they don’t know too much about Korean culture,” said Kim Jik, founder of the company. “We wanted to show what’s young, what’s dynamic, what’s energetic, what’s fancy and what’s futuristic to people in Paris at the moment.”

From left: Bartender Lee Jin-young serves somaek, a popular Korean cocktail made with soju and beer, at a party hosted by Maison de Coree; Local DJs play a set that includes K-pop for the party; Chef Lee Jun of Soigne, Kim Jik of Maison de Coree, and singer and actor Jung Joon-young are the people behind the pop-up [MAISON DE COREE]

Chef Lee, who has been changing menus every three months and working on updating ancient Korean recipes at his restaurant in Seoul, has prepared different dishes for lunch and dinner. Lunch costs 25 euros ($28.50) and includes a three-course meal and a drink, while dinner costs 60 euros and is made up of a five-course meal and two drinks.

Both alcoholic and non-alcoholic drinks are available as bartender Lee has been working on perfecting cocktail recipes that are popular in Korea. His bar Alice has been named one of the best bars in Asia, and he recently opened a new bar in Jeju to cater to international travelers visiting the island.

One of the drinks available is somaek, a mixture of Korean soju and beer commonly served with dinner across the country. It is extremely popular among those who want the clean taste and bubbly feel of beer, but the kick of soju - without the strong taste of alcohol.

The pop-up doesn’t stop at just serving lunch and dinner. It hosted a Halloween party on Oct. 31 and held a fried chicken pop-up to introduce flavors Koreans enjoy when they eat fried chicken.

But casual dining isn’t the only thing they want to show off. Through a collaboration with chef Lee Young-hoon of Michelin-starred French restaurant Le Passe Temps in Lyon, France, the event also presents finer foods that can be found at luxury restaurants in Korea. Chef Lee Young-hoon is the first Korean to be awarded a Michelin star for a restaurant in France. 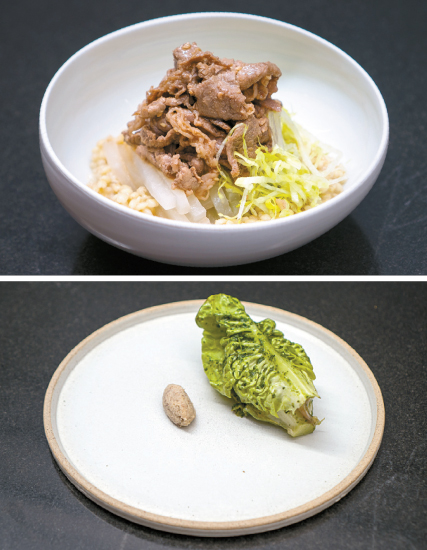 Some of the dishes available at the pop-up event. [MAISON DE COREE]

The two chefs wanted to show a different approach Korean chefs can take when it comes to curating modern dishes inspired by what’s traditionally known as Korean food because there are already many Korean restaurants that serve dishes such as bibimbap, rice mixed with vegetables, or bulgogi, grilled marinated beef.

“After seeing people lining up in front of restaurants serving Japanese ramen, udon or sushi over the past two or three years, I have started to think that Korean food can become widespread faster than anybody expects,” said Kim of Maison de Coree, who provides food products like dumplings to large food stores including Carrefour or Monoprix.

The mix of casual and fine dining-style food is an effort to figure out what could work best in a city known for being one of the gastronomic capitals of the world.

Maison de Coree would like to expand its presence in the restaurant scene and sees the pop-up as an opportunity to test what format and location would appeal most to Parisians.

It plans to open a restaurant sometime next year. The location of the pop-up is temporary. Kim will begin his hunt for a restaurant space soon.

“It is difficult to say we have made a major push in making Korean food better known in Paris, but more of these kinds of events can [spawn] something more and something new,” said Kim.