Just as some of K-pop’s most successful singers head out on world tours to make the most of their global fame, other Korean cultural contents have realized that they need to make the jump to the global market in order to reach an audience far bigger than those inside the boundaries of a single nation to truly succeed. Case in point: web comics, one of the most popular forms of entertainment for young people in Korea. After translating stories into other languages and creating services through which people around the world can access them, the online comics industry is quickly growing abroad thanks to the global services launched by Korea-based websites.

In Korea, web comics are known as webtoons - a portmanteau of the words web and cartoon - and have been around for about three decades. The predecessors of webtoons were posted serially on portal sites such as Naver, Daum, Yahoo, Empas and Paran beginning in the mid-1990s. Before the 2000s, most webtoons were standalone comics with each episode telling a different story from another. In 2004, a game changer came from cartoonist Kang Full in the form of his “Hello Schoolgirl” series, the first-ever serialized webtoon that revolved around a single story, like a typical comic series.

After that, webtoons became a staple of Korean digital culture, with about 7.5 million people reading webtoons daily just on the portal site Naver.

Webtoon readers mostly turn to the webtoon sections of Naver and Daum to keep up with their favorite stories, while websites like Lezhin Comics provide only webtoon services: together, these three names rule the space.

Among the three webtoon giants, Naver was the first to think about going global. In July 2014, Line Corporation - Naver’s Japanese unit - launched Line Webtoon, a global webtoon service, and in the second quarter of this year, it announced that the number of monthly active users had surpassed 24 million internationally, with 5 million in North America alone. (The number of monthly active users of Naver Webtoon, the Korean service, is 22 million.) Currently, the English website and mobile app provides 140 stories, among which are 90 Korean webtoons that have been translated into English.

What performs well on the English language service rarely matches the highest ranked webtoons on the Korean service. For instance, “Tower of God,” which just released episode No.326 last week in both Korean and English, is one of the most popular webtoons in Korea, but the series has failed to attract excitement from foreign readers. 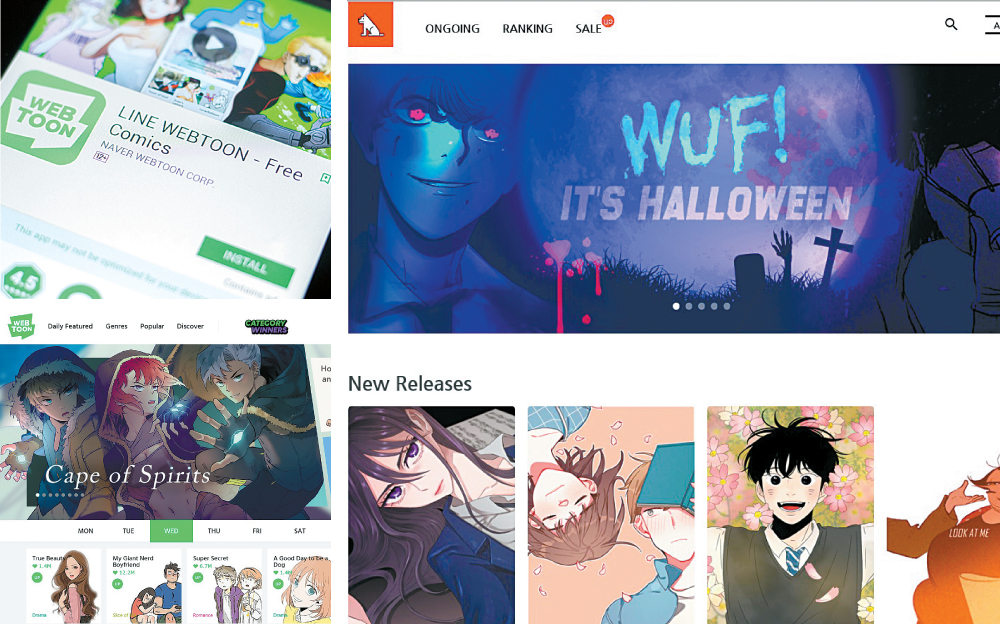 “[You can’t] say that there’s a major disparity in what people [from different countries like], but there is some gap,” said a spokesperson from Line Webtoon. “‘Tower of God’ is always in the top three most popular webtoons both on the computer and mobile [in Korea.] But on the global service, it doesn’t ever make the [top 10.] This difference exists with other works as well. We don’t quite know what the reason is.”

But according to Line, the discrepancy is not an issue because the goal of the global platform isn’t just to export Korean content to the world, but to expand as an online platform that carries different content for different audiences.

Apart from translated works, there are currently 50 webtoons on Line Webtoon written by well-known international artists such as Fabian Nicieza, author of “Deadpool,” and Warren Ellis who created “Red.” There are also cartoonists who have been selected through the “Discover” section, which allows for anyone to submit their works. If the stories receives a positive reaction from viewers, Line Webtoon’s editors contact the person who uploaded them and offers them the chance to get paid for having their work published on the service. As of November, 36,000 webtoons have been uploaded by wannabe professional cartoonists from around the world.

Another hotshot in North America is Lezhin Comics, a comics service that launched in June 2013, and went abroad in January 2016. Lezhin provided 160 Korean works translated into English as of last December, when the company exceeded 51.3 billion won ($45.1 million) in sales - 10 billion won of those sales came from Korean works. Earlier this year, Lezhin’s English app was the top grossing web cartoon app on the Google Play Store, outperforming apps from Marvel Comics and DC Comics.

Lezhin Comics makes its sales through the wait-or-pay system it came up with when it launched its Korean service. Contrary to Line Webtoon’s English service, Lezhin earns money by stirring people’s interest: it provides an extra episode or two that can be read before they become available to readers for a small payment per episode.

“We were first focused on exporting Korean contents to the global market,” said a Lezhin spokesperson. “But we’re also concentrating on getting good local artists to create diverse contents. We also have some works on the Korean service from foreign artists that have been translated into Korean. We’re hoping to expand the exchange of contents and become a global webtoon platform.”

Other webtoon platforms that have gone global include Comico by NHN Entertainment and Toomics. Daum currently doesn’t have a global service, but some of its contents have been exported individually to different websites, such as China’s Tencent.

According to the Korea Creative Content Agency (Kocca), the sales volume of this year’s comic industry is expected to be 1.1 trillion won, a 5.7 percent rise compared to 2017. Of that amount, $40 million will come from content exported abroad.

“The production and consumption of webtoons is expected to rise and spread internationally, with webtoon content created in Korea and from artists in other countries,” said a representative from Kocca. “Global services from webtoon platforms are growing, such as with Line Webtoon in the United States and Indonesia, and Piccoma and Comico in Japan. In the two countries, webtoon platforms [especially] from portal websites are gaining a competitive edge.”