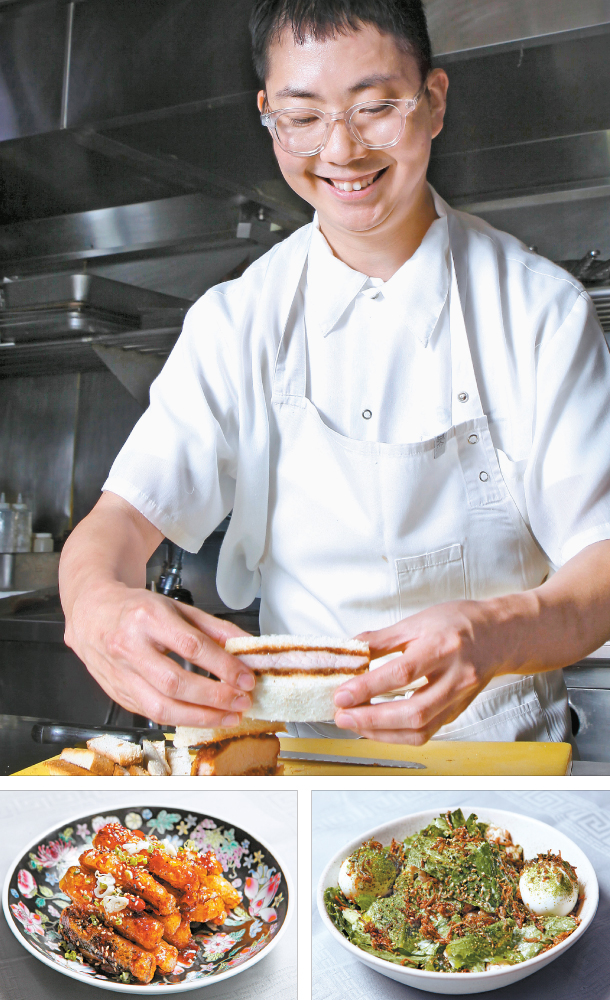 Chef Hyun Sang-wook, also known by his English name Jacob Hyun, makes katsu sand, a donkatsu sandwich that made his restaurant Dotz instantly popular on social media. At Dotz, he serves a variety of Asian food, which was not seen before, as many restaurants are focused on serving just one cuisine at a time. [PARK SANG-MOON]

If you do something, do it first - that is chef Hyun Sang-wook’s - also known as Jacob Hyun - motto. That idea helped push Hyun to build his restaurant Dotz in Hannam-dong, central Seoul, which is known as a place for all types of Asian food.

Hyun is the executive chef to the restaurant that also runs as a cafe when the restaurant is on a break. The restaurant became well known for serving Katsu Sando, a sandwich made with dontaksu (fried pork tenderloin), as a meal. Previously, the sandwich was mostly served only at whisky and cocktail bars.

“I wanted to be the first one,” said Hyun, explaining why he focuses on Asian food, especially different types of Chinese food.

There are many restaurants that focus on one particular Asian cuisine in Korea, such as Thai or Vietnamese, but there aren’t any well known ones for offering a variety of Asian foods all together or more modern variations of Chinese-inspired dishes. His inspiration mostly comes from Mission Chinese, a restaurant chain that has branches in New York and San Francisco.

The hustle and bustle vibe in the rustic yet stylish restaurants that are filled with trendy people looking for new Asian flavors caught his eye when he first saw the hip chain in a Chinese food recipe book published by Mission Chinese that he ordered while working for Jungsik in Seoul.

Without any prior experience cooking Chinese food, he gradually stepped into the world of Chinese flavors and learned how it has transformed over time in each country. He learned about American Chinese dishes like General Tsao’s Chicken and Korean Chinese staples like jjambbong, spicy noodle soup, and jjajangmyeon, noodles with black sauce. 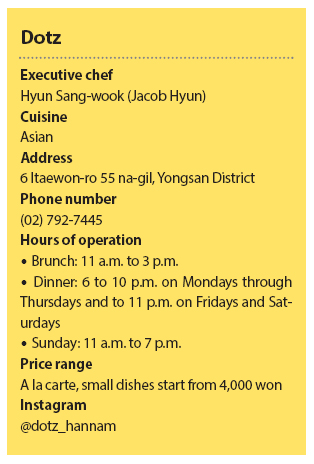 He found himself mesmerized with how chef Yim Jung-sik of Jungsik used a wok to make fried rice and wanted to learn everything that he could. His dream of learning more about the variations of Chinese food overseas grew day by day, and he ended up in Australia, where Lee Ho Fook and Mr. Wong, two of the restaurants he long wanted to work in are located.

“While other Asian countries were too close to one another, which made it a bit difficult for each culture to [grow with distinctions], Australia was far enough for Asian immigrants to create a culture that coexists with what’s already there,” said Hyun.

The person working the wok in a Chinese kitchen can make a great difference in the final taste of the dish, but while in Australia, he learned how to set a system so that the no matter who is cooking, they will be able to serve consistent quality adapted Chinese food.

“What seemed to be important was how to keep things refined and modern” said Hyun. “People are normally drawn to something they feel comfortable with, and that was what made me think a lot about what I want to do in Seoul.” That’s something he learned during a couple of pop-up restaurant events he did in Seoul after he came back from Australia.

At his restaurant, he serves a lot of dishes that people are already well aware of, such as katsu sand, kimchi fried rice or menbosha, a fried shrimp sandwich.

He believes that what works best is a dish that’s visually attractive as well include familiar flavors.

“New-tro” is the idea he says is dominant in the local food scene, where both new and retro styles coexist.

Now that the restaurant is into its second year of business, there are others trying to make Chinese restaurants both rustic and trendy at the same time. He is now working with his restaurant’s mother company to open a new, more casual spot in the area.

“My mind is set on doing Asian - how I will unravel the ideas constantly change,” said Hyun. “I wanted to focus more on suggesting new dishes during dinner while lunch is has more comfortable dishes that people are already aware of,” said Hyun.

“If customers want to see something at a restaurant and there’s a big and constant enough demand for it, I think it is right to give the customers what they want,” he said, keeping the options open for serving what’s available during lunch available during dinner as well.

Although he was striving to be the first to introduce new things, he doesn’t dream making his name known.

“What I want is for people to, when they are in Hannam-dong area and talking about where to go for lunch, suggest Dotz, and they say ‘oh that’s not a bad choice at all,’” said Hyun.

Instead of being known as a place that’s too hot at the moment with high expectations, he wants his restaurant to be known as somewhere that serves food that is accessible and doesn’t in intimidate people from walking in to have a bite.

Although Hyun’s style of food has been warmly welcomed by diners here and he has built a sturdy base of returning customers, he still thinks that he wants to fill in a blank with his Chinese cuisine education. There are some schools in China offering a one-month program where he can pick up the traditional styles that he wasn’t able to learn in Australia and Hong Kong. He envision going to China and learning the basics so that he can create his own version of Chinese-inspired dishes.

“Maybe with more education, I might be able to explore the world of Korean Chinese more so that I can come up with a new variation of what people now know as Korean-Chinese dishes,” said Hyun.

“I like casual Asian food because it is usually served family style, all the dishes put together on the table,” Hyun said, adding that he will work more to cook what’s familiar and new.