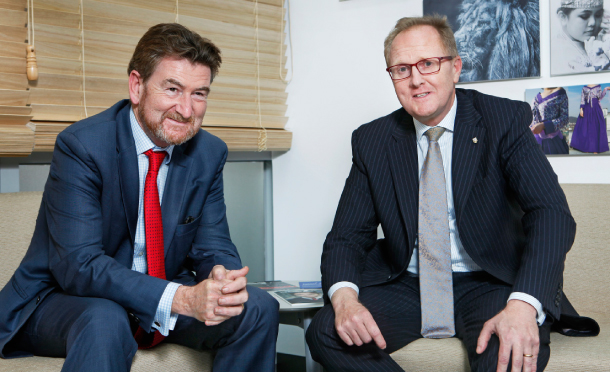 Education isn’t just about learning inside the classroom - a lot of a students’ learning should occur in the outside world, according the master of Dulwich College, Joseph Spence.

Dulwich will be gathering hundreds of students from the college’s international schools, including its Seoul campus, next March for a sporting, music and drama Olympiad in London.

“This is the sixth Dulwich School I’ve visited during the course of the week,” Spence told the Korea JoongAng Daily at Dulwich College Seoul in southern Seoul during a recent visit. “It’s been a chance to tell the students about a sense of what I call a commonwealth of schools - we have a collection of schools which have a shared ethos, which is most simply described as a commitment to a holistic education.

“So nothing could be better than taking them out of school for a week to bring them to London to say that everything they do in the world of sport, music and drama, art, adventurous activities and charitable work is what education should be about,” he said. “It’s not extracurricular, it’s part of the curriculum”

Dulwich College is an independent school in Britain founded in 1619. In the past decade, it has established international schools in Asia, including in Seoul, Beijing, Shanghai, Singapore and Yangon, Myanmar, and altogether provides education to some 7,200 students. Dulwich College Seoul opened in 2010 and currently has over 650 students from ages 3 to 18 from more than 40 countries.

Next March, around 850 students from Dulwich College’s international schools in Asia will participate in the second school-organized Olympiad.

“There are some sporting competitions and it’s kind of a jamboree, a mixture of many sports, football, basketball and some athletics,” said Graeme Salt, head of Dulwich College Seoul.

“We’re developing the students’ scholarship of course, but also their social abilities - their ability to work with people, their personal interest and passions,” Salt said. “Graduate Worldwise is a phrase we introduced last year throughout the whole of the network of schools and it tries to point parents in particular to the nature of education of being not about hoop jumping. It’s not about just getting to the next stage. It’s about preparation for life.”

“I was talking to the young adults in grade 12 and 13 [at Dulwich College Seoul], that sense that they know that 45 points in the IB wouldn’t be enough” Spence said. “The future lies with people of will, volition, flexibility and an ability to make the most of whatever setting they’re in. And these schools I believe are preparing them for that very well for finding their vocation, not just jobs.”

And the same principle should apply to the hype in education around the Fourth Industrial Revolution, said the two Dulwich school leaders.

“What the education should be doing is developing students’ abilities to engage with design thinking - to be able to identify problem, to creatively come up with solutions, not to be the machine,” Salt said.

“Two weeks ago in the U.K. there was a meeting of 225 headmistresses and headmasters of the leading independent schools and we listened to Google,” Spence said. “And what does Google want ? Google wants storytellers, designers, dreamers, people who can communicate, people who have been to schools like this and encouraged to learn to work in teams and to lead teams and to think out of the box.”

The two leaders at Dulwich have had their own experiences with learning outside of classrooms.

“I hated school - I hated going through hoops but believed from that day I became a teacher by accident I found my vocation,” Spence said. “Because I do know what it’s like not to be enjoying it. Teachers who loved school often can’t understand why a child is not able to do it, not able to go through the hoops, not able to behave, not able to just do what they’re told.

Spence said the decision to open a Dulwich School in Seoul had a lot to do with the city and the College’s compatible needs.

“I remember the work done with Mayor Park [Won-soon] here in Seocho, and the development of a very strong sense that here was a desire for a great international school and a British-style school,” he said. “We already had a tradition of highly successful students from China and from Korea and from elsewhere in this region and therefore it felt as if there was a knowledge already of what Dulwich and what British independent education stood for. And nothing has happened since then that changed anyone’s mind about it.”