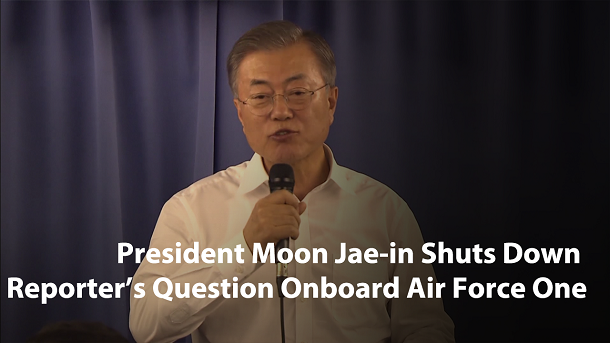 2) President Moon Jae-in held a press conference inside Air Force One on his way to Oakland, New Zealand, from Buenos Aires, Argentina.

3) “If you have any questions I will receive them. I don’t know how you were told this conference is going to be carried out, but I will not answer any questions related to domestic issues.” - President Moon

4) Q. The possibility of North Korean leader Kim Jong-un visiting Seoul by the end of this year.

6) “We would have to wait and see how it goes. There was a concern that if another possible summit or high-level meeting between the two Koreas happens before the second U.S.-North summit, it may act as a burden on the United States. However, after talking with U.S. President Donald Trump yesterday, I can tell you these concerns had been adddressed.” - President Moon

7) Q. Diplomatic issues during the third year of Moon’s term

8) “In terms of diplomacy, I hope that, after a second summit between the United States and North Korea, progress related to the denuclearization of North Korea will speed up.” - Moon

10) “I don’t think you need to speak any longer. I will only answer questions regarding diplomacy.” - Moon

11) Q. Before leaving the country, you mentioned something about a “rightful country” on your social media account.

12) “Bringing peace and complete denuclearization to the Korean Peninsula through improving the relationship between two Koreas is a part of making a rightful country.” - Moon